Samsung has its issues as well,

Agreed, and a nice thing about it is I don’t see it as buying a Samsung phone so much as I bought Android. My next Android phone very likely won’t be made by Samsung for example. I’d have bought a Pixel if it didn’t ditch the headphone jack, which I continue to view as obnoxiously heavy handed (“pushing industry innovation”, ha). But that’s what the land of choice known as Android is for. And I have to say I’m loving having a micro SD card surprisingly much. Being able to carry my entire music collection with me in off-line form is pretty damn awesome.

“Unlikely”, as in “We thought it was unlikely you would ever figure out what we were doing”. 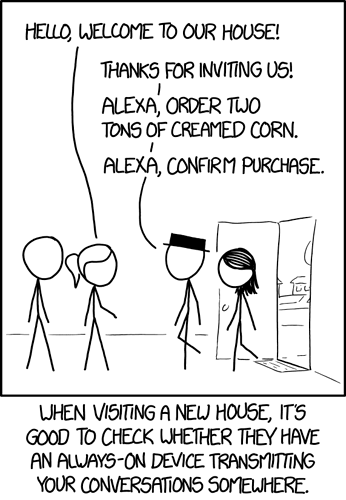 The early cordless phones were analog (no encryption). If you unplugged the power from the base station you could hear your neighbour’s conversations.

Dark patterns" are those where a user interface is explicitly designed to fool the user into doing something they don’t want.

Like putting the link to discussion forum sandwiched between ads on your blog?

I don’t know about the Echo, but for those with a Google Home, there is an option to have it make a sound when it hears the wake word. That gives you a chance to stop talking.

I have three in my house. It definitely perks up randomly but it almost always says it didn’t understand. It does seem “unlikely” that it would interpret a conversation as multiple commands including confirmation, especially without the user hearing it ask questions. But with enough of them always listening to enough conversions, I guess it was bound to happen.

This “unlikely” event was the basis for a gag on the A-Team. The A-Team: In Plane Sight

Directed by Tony Mordente. With George Peppard, Dirk Benedict, Dwight Schultz, Mr. T. When a cargo plane pilot develops engine trouble over Venezuela, he safely lands only to find himself incarcerated by authorities when cocaine is discovered aboard...

Faceman: We’re outta ammo, B.A., give me some clips.

Judy Rogers: [B.A. falls into a hypnotic trance] You said the trigger word. You said ‘eclipse’!

“OK Dave. I’ve ordered Cardamom and Bay Leaves for you”

Well, it’s the same result without all that passive-aggressive nonsense.

I don’t know about the Echo, but for those with a Google Home, there is an option to have it make a sound when it hears the wake word. That gives you a chance to stop talking.

I have three in my house. It definitely perks up randomly but it almost always says it didn’t understand. It does seem “unlikely” that it would interpret a conversation as multiple commands including confirmation, especially without the user hearing it ask questions. But with enough of them always listening to enough conversions, I guess it was bound to happen.

Echo also has this option, and I’ve also heard it “bong” at unexpected times when it mistook the sound of a TV or a conversation as its wake word. In one case it interpreted TV dialog as a question (which from examining the log wasn’t even close to correctly interpreted) and responded to it.

“Okay, ordering 42 butt plugs. They will arrive on Tuesday by 5pm.”

I have a stats background too, but I was being flippant

What I mean is that if you view having a conversation recorded and shared without permission, and value your privacy highly enough you won’t buy one, then even having it happen once is too many times.

Butttt if you wanted to get into the weeds with stats terminology, the law of large numbers doesn’t apply to properly designed software. If you use a sufficiently large key, symmetric encryption schemes like AES will keep your data secure as long as the sun burns. And there are secure ways of exchanging keys as well.

TL;DR: It’s only when there’s an implementation flaw that the law of large numbers comes becomes applicable.

If you have one of these gadgets in your home, still? Maybe rethink that.

I don’t want and wouldn’t have one at this point in my life, but an Amazon echo can improve quality of life for disabled people so much that incidents like this are an acceptable cost to them.

My brother-in-law can’t get up and dial a phone or put music on the stereo, but he can tell Alexa to do it.

Rather to point out that most people already carry always-on listening devices they have little actual control over on their person almost all the time.

The large and obvious difference being that Alexa hadn’t been interfered with, it wasn’t running secret code that made it behave in ways that were unexpected, it wasn’t even a bug - it was working entirely as intended. Its whole purpose is to listen to everything you say, try to interpret random sounds as commands and then act on them.

Came here to make the same point. “unlikely” might be a good alibi if you’re a boutique crafter on etcey who sells maybe a hundred units. When you’re a big company trying to get your warez into everyone’s home, it’s a preposterous alibi.

So rather than talk about this, because hoo boy I’m sure all the words have been said there, is there anyone that’s making a localized alternative to the echo?

Look, having a hands free timer / measurement converter / etc in the kitchen is freakin’ great. I really like my Echo. I wouldn’t put one in my bedroom, but my personal care level is basically right around ‘as long as it’s useful’. But if someone wanted to sell me something that did what I needed and wasn’t connected to Amazon’s networks or otherwise was owned/controlled by me, I’d jump all over it.

Acceptable or unavoidable? I’m heavily reliant on my smart phone to manage my disability. There’s a lot I don’t like about what that means, and it’s implications for privacy, but I don’t have a meaningful choice. I wouldn’t be able to hold down my job without it.

Same with early mobile phones you could get one side of a conversation by tuning around with a decent radio. I had a friend who would do this and sample it for his shows. He had a recording of one side of a couple arguing. Only he hadn’t really thought through the consequences of it being localized to the range of mobile phones. One night he was doing a gig and it turned out the couple were in the audience which shortly lead to someone jumping on stage and taking a swing at him.

Same with early mobile phones you could get one side of a conversation by tuning around with a decent radio. I

Are you sure that’s not cordless phones? Those would broadcast on two frequencies simultaneously, one for the base station (both sides of the conversion) and one for the handset (which was just one side). I can’t imagine a reason why a cellphone would be always broadcasting though, especially only one side of it, and if doing so when not in use the battery would die pretty quickly I’d think.

And speaking of which, it sure was entertaining when any police scanner could tune into all cordless phones within range. Some frequency ranges were blocked by the manufacturers, but it was all pretty laughable, they’d just put a very conspicuous resistor jumping a section of the circuit board, begging to be snipped to open the full range of the radio. Good times. Put a little ambient background music to it and it’s DIY Joe Frank.

But if someone wanted to sell me something that did what I needed and wasn’t connected to Amazon’s networks or otherwise was owned/controlled by me, I’d jump all over it.

I’ve seen various iterations of open source, Raspberry Pi based voice assistants, like the AlexaPi, but haven’t tested any yet.

Promising though! And I completely agree, would be very useful. Could even make a gateway to the Echo or whatever that does nothing but listen for the watch word, and if detected, sends the audio to the Echo for further processing. That way you don’t have to completely re-invent the wheel and can use Alexa skills or whatever, while being reasonably sure there’s no shinanigans going on with your privacy.

Yeah, there’s always been a lot of neat DIY stuff…but I want someone to design it, build it, put it in a goddamn box and sell it. I’m not against making stuff or anything, I spend a lot of time thinking about woodworking and furniture, but I just don’t have the desire or skills for electronics or circuitry or programming.

I think the big problem is the fundamental issue with voice translation being fairly expensive, processor-wise, which is why Google, MS, and Amazon all call home to big datacenters for voice transliteration. On the other hand, I’d love to hear that someone solved that already so I don’t have to wash my hands to set a timer.

Edit: Yeah, and the thing you linked seems to just be how to make your own echo, complete with reliance on the Amazon ecosystem. It’s kind of the worst of both worlds.