Sorry for the delay in opening this. This topic being locked uncovered an edge case I need to open a ticket about.

At lowest estimation, 5 million Native Americans dead from planned genocide and land theft, and white people have the nerve to bitch about not being able to wear headdresses to a music festival.

I need this on a goddamn shirt.

I hear you. It can be confusing and I’ve definitely gotten it wrong in the past.
As a general rule of thumb, when someone from the culture I’m borrowing from tells me that it is offensive, insulting or inappropriate, I believe them.
The power dynamic is a critical element here. I don’t know your makeup, but white Americans, even the most unfortunate of us, stand on a base of privilege built on the backs of generations of non-whites. One basic way of recognizing that is by heeding them when they say something we’re doing is hurtful, and stopping doing that thing.

As a general rule of thumb, when someone from the culture I’m borrowing from tells me that it is offensive, insulting or inappropriate, I believe them.

One basic way of recognizing that is by heeding them when they say something we’re doing is hurtful, and stopping doing that thing.

Oh, the whole “if only you didn’t use big words, people would be on board” argument… except that’s not the case. The same people who dislike “cultural appropriation” (a perfectly good phrase that accurately sums up what’s happening) aren’t all of a sudden going to be on board if you call it something else. Literally no one who wants to keep the name of Washington’s football team would all of a sudden have a come to Jesus moment if you didn’t use the phrase “cultural appropriation”. (which might be a bad example?). Same with the head dress. Becky is not going to all of a sudden take off her headdress and dive into a book on Native American history because you stop using “cultural appropriation.” Because they don’t give a shit. These are the same people that wear Trump 2020 “fuck your feelings” shirts. They whinge about the use of the language because they think that us egg head academics are the real problem, and they think it’s bullshit that we get a say at all in describing the world.

The same people who dislike “cultural appropriation” (a perfectly good phrase that accurately sums up what’s happening) aren’t all of a sudden going to be on board if you call it something else.

Ditto “white privilege,” despite many loud proclamations to the contrary.

Cultural Appropriation is a shit phrase that doesn’t fit with how culture or appropriation work.

A culture has a thing
Another culture creates a new thing, based partially, or entirely, on the other culture’s thing.

What part of that doesn’t fit with “Culture” or “Appropriation”?

The same people who dislike “cultural appropriation” (a perfectly good phrase that accurately sums up what’s happening) aren’t all of a sudden going to be on board if you call it something else.

Right? It’s goal post moving… they claim that if you stop using big words and engage respectfully, they’ll maybe listen… It’s not the case. They don’t want to talk about this stuff, because they don’t have any interest in either addressing the past or in fixing the present to create a better future. They want to retain their privileges, and if equality that means having to acknowledge that what they’ve done, or what has been done in the past or today, they aren’t interested. Pinning it all on the choice of language assumes that the people on the other side are just as interested in progress as we are. That might be true in some cases, but not always. In many time, it’s either a case of people not wanting to deal with reality or people not wanting to move forward in a productive way. It’s really the same argument about not talking about the history of violence towards POC or women of any race. Their argument, “why bring it up, it’s in the past” ignores that it’s not “in the past” it’s right now, and that we can’t move forward with solutions (which plenty of people have suggestions for and always have), until we understand what went wrong up to now…

Plus, it’s just policing language, which of course, is what the right wing claims is happening to them with their freeze peach arguments! It’s pretty hypocritical, if you ask me, to whinge about not being able to use racial slurs or “un-PC” language, and then turn around and then demand that people no longer use “white privilege” or “cultural appropriation” because it hurts people’s feelings (which, what? Why?)

What part of that doesn’t fit with “Culture” or “Appropriation”?

I think there are currently complexities to interacting with cultures. However usually when I click through from a headline to an article on cultural appropriation I say to myself “that clearly culturally appropriation - no question or qualifications “

I’m a musician and it obvious that syncretism is the mechanism by which the artform advances. There is a tension between syncretism and cultural appropriation. Syncretism is how migrants integrate into societies. It is how we create new cultural forms. It is a vital and necessary mechanism.

How can someone practice syncretism in an ethical manner? Acknowledging where things come from and your relationship to that origin and trying to understand its significance in its original context. This boils down to respect.

There is a big difference between cultural sharing and stealing. Much of the modern music industry is straight stealing by rich white men from everyone else.

I don’t think that difference is large or well defined. There is a moral and aesthetic judgement that is quite complex. There are obvious examples of objectionable cultural appropriation, like hipsters in native American headdress at a festival.

On the other hand we have things like Django Reinhardt and Stephan Grapelli taking a Russian folk song and performing them it in a Jazz idiom or Steve Reich’s use of African polyrhythms. An aesthetic apartheid where artists are limited to choices from their own cultural background will leave us poorer.

If the artists using elements outside their own culture do so with respect, fully acknowledging where their influences come from and giving credit where it’s due, that’s syncretism.

If it’s the example you gave, “hipsters in native American headdress at a festival,” who wear them without any concept of the history or context of the items, only doing so because “they look cool,” it’s cultural appropriation.

I’ll admit the issue is far more complex than that… but I think it’s a good baseline to start from.

Nobody’s arguing that cultures don’t influence each other. This thread’s about an example where it’s overwhelmingly done in a disrespectful and oblivious way, for the pleasure of idiots, and to the detriment and annoyance of the culture it’s faking. 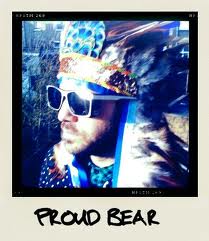 But Why Can’t I Wear a Hipster Headdress?

(image from http://www.facebook.com/iamhowlingwolf, which is an entire post in itself. geez.) I've posted a lot about the phenomenon that is the hipster headdress (see here, here, and here), but I've never really broken it down…

That was my original point. It is more useful to talk about cultural insensitivity because that is the problem. Cultural appropriation is what happened to the Elgin marbles, or when Stan Getz ripped off the Gilberto.

Cultural appropriation is what happened to the Elgin marbles, or when Stan Getz ripped off the Gilberto.

(Are headdresses just something that you think are less important than a style of music or marble sculptures? Maybe that’s the real problem here?)

No, the Elgin marbles are irrelevant in this. The British empire (boo, hiss) bought them from the people who stole them fair and square. They have never claimed them as their own culture, just property. You can definitely say that the ancestors of Normans and Saxons claiming Stonehenge as theirs is cultural appropriation. And, in fact, the modern Greeks claiming the Elgin marbles, since they share almost nothing, genetic, cultural, linguistic (look up “Hellenization”) with the ancient Greeks except geography.