Especially the tactical ones. 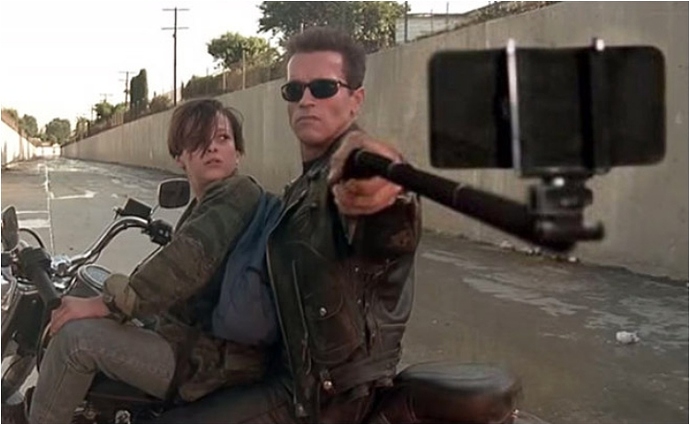 This is good, but the history us much older.

The counterculture thought indians were cool. The poster for the “human be-in” of Jan 1967 had a plains indian on it, and in “San Francisco Nights” Eric Burdon sings about Haight-Ashbury “it’s an American Dream, includes indians too”.

The intellectual counterculture saw something deep, but the masses definitely saw it more as cool.

At the Monterey Pop Festival in June of 1967, Mickey Dolenz of The Monkees is wearing a headdress, maybe the first example of “cultural appropriation” at a music festival. So it goes back fifty years.

There’s a mix here, since the fifties were a low point, and then between the civil rights movement and the counterculture native people felt a sense of power and flexed their muscles. The ocvupation if Alcatraz in late 1969 may not have happened in an earlier decade, and dies seem informed by the counterculture. You coukd wear your hair long for mainstream reasons, and then find the culture.

I was just reading that the fish-ins of the Pacific northwest ended up with some Black Panthers getting involved.

But the counterculture was also careless. Greenpeace bought into the notion of “the warriors of the rainbow”, but it turns out to be some white legend, nor native. Rolling Thunder got counterculture attention, but now he’s considered newage rather than native, some doubt even of his ancestry.

I have have had long hair since I was 12 years old, the counterculture influence though I never cut it so it can’t be separated from me. But I’ve inadvertently honored the ancestors, since they are native. But other than some teasing as a kid, not tge dame problems as natives who even now can get in trouble at school for having long hair.

I’ll never forget being in South Dakota n 1980 and someone from AIM said to my friend Kimberly that she shouldn’t hang a feather over her tipi door. She thiught it was cool, she was a Rainbow Person. But that was the first time I heard someone speak against “cultural appropriation” even if the term wasn’t used.

44 posts were split to a new topic: Hairstyles: Appropriated or Appreciated?

“Totems” Are there specific ones that have been a problem? I mean other than the totem poles might cause some space issue.

I don’t recall seeing anyone wearing those when I attended Outside Lands. Have they been becoming more common in recent years?

Won’t someone think of the Instagrammers ?!

I mean, this could impact the revenues of so many gorgeous but-self-absorbed White chicks. What next? No kimonos, grass hula skirts or Wakanda warrior garb?

Already all the cool places are banning our selfie sticks, and oh so sorry I went beyond the safety fence to shoot my 1,549,982-liked sunrise at the lip of the Grand Canyon (so glad I chose that filter).

All these rules are making it harder to earn an honest buck. I say we create a hashtag to fight this injustice.

I predict next year’s popular headgear among white Instagram Influencers to be afro wigs.

So why was this ever a thing?
They look cumbersome and hard to care for. Why?!

You’ve been to Coachella how many times?

Headdresses aren’t casual wear, Native Americans are incredibly unlikely to be wearing them to festivals. That’s like saying banning blackface inconveniences all those black people who might want to wear it.

(If elders did show up dressed traditionally, I don’t think they’d enforce it against the stated purpose of the guideline, which is to respect the traditional culture.)

If you’re talking about the war bonnets of the Plains natives, sure, I agree with you. However, some tribes, like the Alutiiq, have dancing headdresses, which would be a perfect accessory for a music festival. I guess the traditions of my ancestry aren’t that important though, since there’s less of us than the Sioux and Cherokee.

Weapons aren’t allowed either, but if a cop showed up, I don’t think they’d tackle them to remove their gun.

Yep, there is a whole host of regalia across many different tribes.

Here is my cousin (something removed) dressed for a turkey dance. 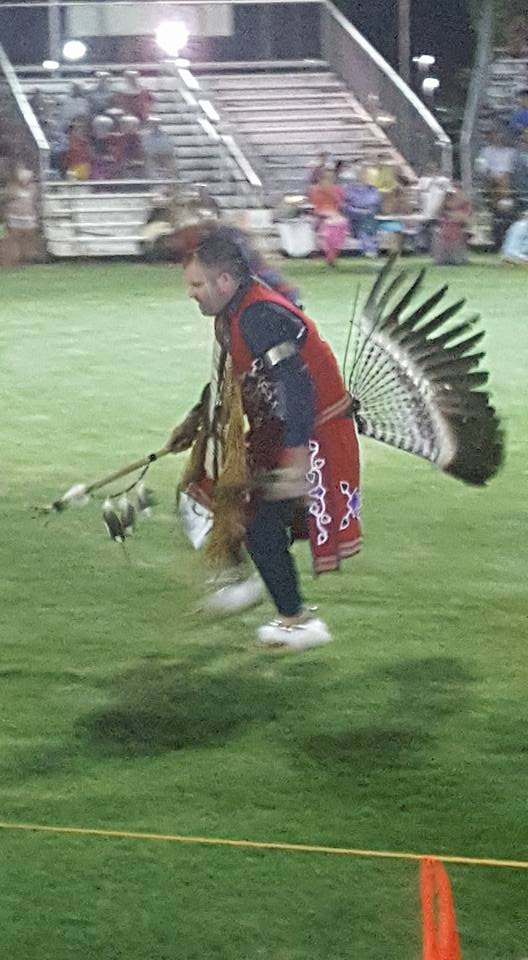 Here is a guy doing a Prairie Chicken dance. 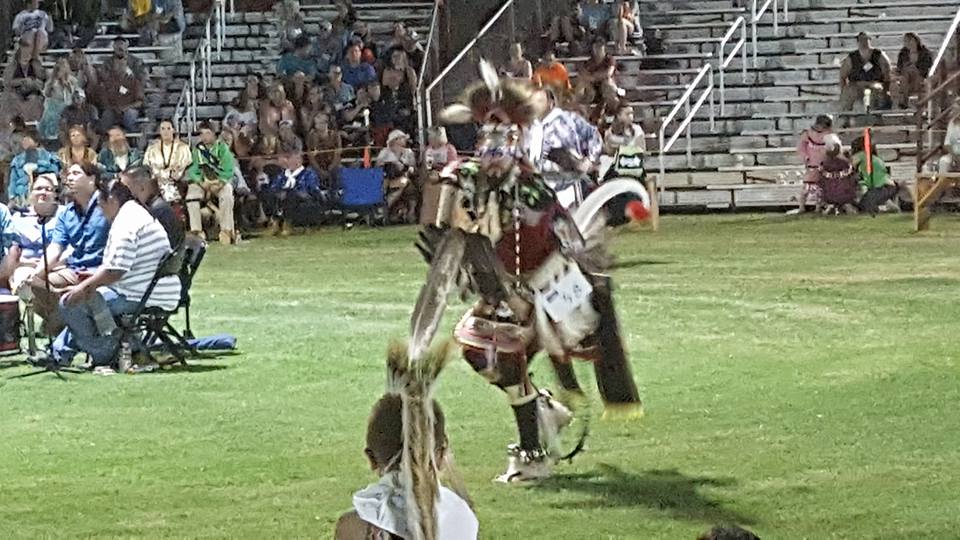 Though I guess there is a time and a place for all that. I mean, society as a whole is irreverent, especially when it comes to religions and traditions, it seems. If it is YOUR culture you tend to revere it. If it is someone else’s then you tend to treat it more like a cartoon. Think Irish or Italian or Polish for European examples.

If it is YOUR culture you tend to revere it. If it is someone else’s then you tend to treat it more like a cartoon.

And then sometimes one has more reverence for other cultures and you is treat your own as a cartoon. 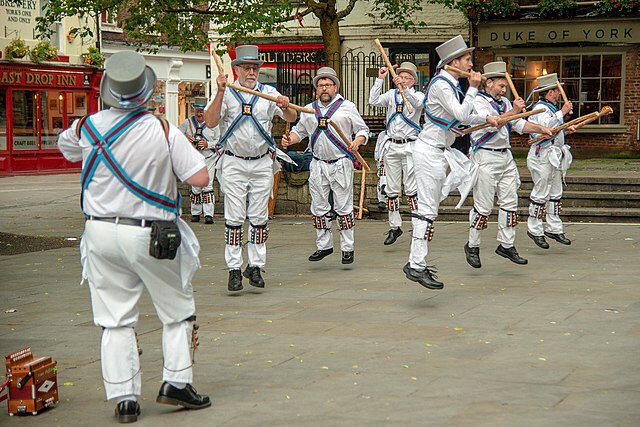 Could people maybe give a second or third thought before they post shit making fun of Native American culture in this thread?

It doesn’t help when it looks like people are saying the equivalent of “Don’t culturally appropriate, especially when that culture has such ugly stuff. Look at it. Gross.”

If you’re talking about the war bonnets of the Plains natives, sure, I agree with you. However, some tribes, like the Alutiiq, have dancing headdresses, which would be a perfect accessory for a music festival. I guess the traditions of my ancestry aren’t that important though, since there’s less of us than the Sioux and Cherokee.

The whole point is that there are A LOT less of us Native Americans in the general population. I gladly educate anyone who asks about what stuff is okay to appropriate and what’s not okay, but I’m only one person.

It’s more about the fact that all human cultures, without exception, adopt elements from other cultures which they encounter.

Native Americans have gladly shared many things with Europeans. There are certain aspects of our culture, however, which still have a lot of meaning to us, and we feel a bit troubled to see these things trivialized in this manner.

That is in NO way related to being “white” or otherwise but is common nature of all human beings.

White people do in fact feel empowered to take whatever they like, do whatever they wish, without asking. That’s privilege. Nobody ever asked, “hey, is it okay if I wear this? It looks real groovy and exotic, man!”

There’s also a huge amount of history. Without that history, lots of our discussion about race and racism would simply not exist. “White people” as a privileged group would NOT be a thing, if in fact, Europeans had not developed a hierarchy of “races” in order to justify all kinds of atrocities.

To put on a hat and say “Oh, I’m now colorblind!” is naive and disrespectful.