The picture is real—it’s from the Atlantic Magazine article China’s Toxic City. This particular photo eerily looks like a screencap from Blade Runner.

Definitely real - that billboard (located in Tiannamen square) is unbelievably bright in person.

good gravy – is that a DAYTIME shot, or evening, or night, or what??

Probably early-mid morning. Remember the “og” part of smog is from fog. 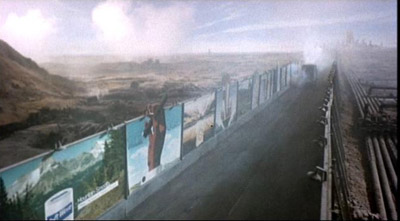 This is what happens when the only thing that matters is productivity. Welcome to your Libertarian, free from all “strangling regulation” utopia.

A souvenir book we bought in Hefei looked odd. I finally figured out that the blue sky had been 'shopped in — vertical lines of smog still clung to building edges.

Garth, that was a haiku.

Ed: Yeah I know not really.

I bought a series of postcards in Shanghai about 15 years ago, and they had done the same thing. One of the ‘tells’ was that they used the same sky for most of the pictures. They seem to have had more (smaller) giant video screens around back then, but they mostly just showed war movies and other patriotic films.

The OG part of smog is indubitably tha’ chronic.

Thank jeebus there aren’t any flying cars to worry about.

Horrible. How do the residents stand it?

It’s not just video screens - have a look at this power station - http://haonowshaokao.com/2012/02/16/innovative-solution-to-beijings-air-pollution/

Unfortunately, you get used to it. After three years in Seoul, I flew to Maine, where the sky is obviously photoshopped.

At least this one is of blue skies. All the giant illuminated billboards in dreary grey London are just trying to sell you Jimmy Choos or Call Of Duty.