that is confusing. i hadn’t come across this yet, but surely some sort of place-holder in the expansion is needed to indicate a post deleted in the chain.

here’s a weirdie I noticed yesterday

the post count is a negative number, and when I clicked through, the actual count was exactly 50.

just puttin’ it out there.

edit: maybe I should @Falcor since he’s the OP of that thread

I noticed that as well, no clue why it happened. Although it has in the past. Any ideas @codinghorror

Discourse is pretty much completely unusable on my mobile device (Android/Firefox). Attempting to scroll down just resets it to where it was when I came into the thread after a second or two.

It doesn’t happen every time, but it seems to happen especially when there are images/videos embedded into a post - it simply won’t scroll past them.

It is related to splitting topics, where the post count will show negative. It is on @eviltrout’s list, right under this.

Also @GlyphGryph what version of Android and what browser? I have not had any issues on Nexus 5 or Nexus 7 with latest Google Chrome.

Is something going on with the bbs? I can’t really post much at this thread without getting this error when I try to reply to anything:

I’m also unable to edit this post. It shows the edits at first, but it’s gone after refresh. Happens with Safari and Chrome. Did the Zetas take over the boing boing servers again?

Sorry, I just fixed the bug, its onebox related (so just avoid the onebox for a few hours, while I get it deployed)

New question: What’s going on with the RSS feed? Since the switch to the new format, the order in which posts show up in the RSS are totally bizarre. Things that post today will show up as having been posted yesterday or even the day before, while others arrive appropriately placed in chronology.

I was trying to play this music video Count to ten thousand! in the counting game thread so I could listen to it while I browsed the thread. but when I scroll down, it cuts it off once I scroll past one more post below. I go back to it and the player is gone and has to load up again

it seems like it didn’t used to do that? anyway, is this just in the nature of Discourse continually loading the thread or can y’all get it to not do that?

That’s kind of The Way It Is, we unload posts as they scroll out of the viewport so we don’t asplode the browser if, say, you scroll down on a 500 post topic all the way.

Generally we only have stuff loaded that’s visible in the current “chunk” of the stream, plus a little bit of slack on either side for easier scrolling, adjusted to whether you are on mobile or desktop (mobile is assumed to have less resources, so the chunk size is smaller there).

makes sense. I thought I remembered it not doing that but it was probably pre-discourse. thanks for the fast reply.

Not a common pattern, and one of my “I didn’t expect that” observations with BBS is that a flat discussion tends to dissuade people from creating endless topics. So we don’t tend to have 500+ post topics nearly as much as I thought we would on BBS.

Well that and the 5 day auto-close policy, I suppose.

So is Boing Boing crashing anyone else’s browser on a regular basis currently?

Edit to clarify that this is the main site not the discussion site that is borking my browser. Started about 24 hours ago and only explodes in linear view mode.

Ok, complaint time: Ctrl-F now brings up the “search” popup for the BBS. This breaks the keyboard shortcut to search for text within a page (at least, in Chrome, Firefox, and IE for windows, can’t say for other browser/OS combinations). Can this please be removed/fixed/changed to a different shortcut key/made disable-able?

Since only the current part of the post stream is ever loaded at any one time, we decided to capture search – in-browser search will never actually search all the topic, just the visible sliver of the topic stream, the posts that happen to be in browser memory at the time you trigger it.

You’ll note that our search now, thanks to @sam, highlights matches in the current topic on the page as well as linking to them. Try doing this search, then clicking / tapping on the result – 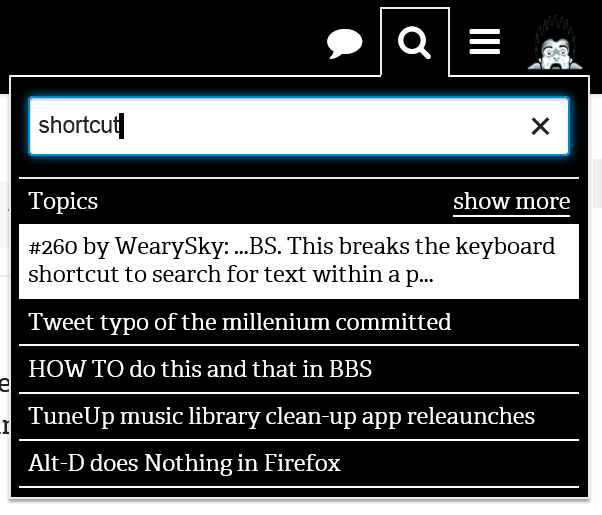 Alright… You win this round, Atkins.

Pretty sure @sam gets all the credit, he built the in page highlighting!

so, here is an ironic type of situation:

because I recently reported a bug concerning the main page to this thread by mistake, an actual bug has popped up due (I’m assuming) to that post of mine being deleted.

this “reply” from Prediksi_Situs is–as you know–not a reply, nor is it a person. I don’t get a “number in a blue dot” notification, but this “reply” is in my notification queue every time I check it since my dumb post was removed. it is always between the new notes and the older notes, and the link just goes to the top of this thread.

That spammer probably did reply to you, then their post was deleted by staff which means it is invisible. The daily cleanup routines should fix it, but let me know if they don’t in say, 24 hours from now.

I moved 2 posts to an existing topic: Behavior of embedded videos in blog feed

was trying to find a topic and the search really let me down.

the one word I knew for sure was in the title is invisible to your search, and this topic is only one or two days old. “demo tape” (not in the title but “tape” is in the body of the post)–nothing. “demo record label” same deal.

of course, after I found it by scrolling thru several days worth of topics and saw the actual wording of the title, I tried “music demo” and of course it popped right up

usually the search is quite dependable, never encountered such an egregious failure like that.