So, if I’m reading this right, the article is about the rise of cable TV prices going up, so discussion of ISP price-gouging is valid, but off-topic.

That said, I was all ready to fly into a rage fit about how greedy cable TV providers are, but then I stopped for a moment to think about it. Even though a great many of us have cut the cord at this point (myself included), isn’t cable TV today significantly better than it was in 1996? Thinking back to my own cable TV experiences from the mid-90’s, here’s what I remember:

These days, even the USA network is turning out original content. I don’t work in television, but I don’t think it’s too hard to imagine that the cost of producing original content is significantly higher than the cost of licensing existing content no longer in syndication. If costs for the content providers go up, they surely pass those costs on to the cable providers, and they in turn pass that on to the consumer.

So while I don’t doubt that there’s some amount of cable company greed involved here, I think the increase in quality and variety of content is sufficient to justify cable TV prices outpacing inflation.

The customers get “serviced” in order to serve the shareholders.

Almost as if the shareholders are the customers.

Don’t forget that MBA programs make sure to flog students with the idea that any attempt at socially responsible actions are immediately negative to the bottom-line and therefore verboten. After all, there couldn’t possibly be any downside to treating greed as the only driving force in business.

Given how cable telecos seem to wish to bundle everything the prices of one are intertwined with the prices of the other to the point both must be discussed.

I can’t really speak to the significance of cable TV price increases, because I don’t subscribe to cable TV. But, my impression is that the increases in the cost of cable TV is probably not far from the underlying “real” rate of inflation. Whatever that means. As I pointed out a few minutes ago in Slashdot on this same topic, “The actual inflation rate is a rather personal thing. And, it depends on some rather personal questions:”

In specific, only you can answer these questions. However, there are some common general trends: To add an insignificant personal data point, every time I have measured the increase in the expense of food, housing, medical or maintenance of income in the last 30 years, my results have traced the US methodology used back in the early '80s instead of current methodology.

For the last 35 years, I have held various jobs at the same university in the leading edge of IT. Back then, my monthly salary was about $35K. If my salary increases had matched the cost of living according to the methodology used in 1982, my current monthly salary would exceed $250K. My current actual costs of food, housing, medical and maintenance of income would be about the same percentage of my budget NOW as they were then.

Instead, salaries at my university have trailed the actual published inflation rate, and my current mandatory costs are crippling me.

Time Warner’s modem fee has been going up 20% a year.

I ended up buying my own cable modem few years ago now when comcast raised the price enough that well it would be cheaper to buy a new one every year.
You should be able to buy your own and you can punt on the rental cost.

I’ve had the internet/phone combo and did this. Miraculously when it was discovered that the phone system will only couple with a specific mac address range of the same model modem, TW no longer required a fee to maintain their modem.

Yes, their solution is for the modem-owning customer with phone/internet combo to have to run two modems: The one you bought to get out of the rental fee, and the one previously “rented.”

Incidentally, as they have “upgraded” these modems and bumped up the rental fee, they have also eliminated the backup battery.

Oh you use them for the phone… Yeah I just get internet and no tv no phone. We have been a cell only house for more than a few years when the phone cost for just the local service was way more than the budget cell plans that have caller id voice mail etc not an extra cost.

We’re about to dump the phone. Already disconnected the cordless set, and I have a red phone (actually two, long story) that mounts on the ancient wallmount adapter. So it’s fun to see the red phone ring, but none of us want to answer it.

You should be able to buy your own and you can punt on the rental cost.

I keep meaning to get around to this. Stupid way to spend $120 a year…

I paid $55/credit at a private college. Today, that college charges $1840/credit.

That’s because the majority of that increase winds up as student loans. Backed by the government, backed by the taxpayer.

If you had to borrow money from a bank to buy pizza, and the taxpayers were required to cover all defaults, that slice would cost at least $10.

Similarly, if the government said tomorrow, “Student loan defaults will be guaranteed only to a max of $300 per credit”, tuition would drop like a Warner Brothers anvil.

When I look at what channels like Discovery, History, TLC, Animal Planet, Nat Geo have become, I think I’m due a retrospective price cut of at least 10% per year over the last decade.

a great many of us have cut the cord at this point (myself included), isn’t cable TV today significantly better than it was in 1996? […] I think the increase in quality and variety of content is sufficient to justify cable TV prices outpacing inflation.

Back when MTV played music videos, the History Channel had shows about history, and the Learning Channel had educational shows? Before they all switched to poorly-scripted ‘reality’ shows? When there were less than 30 minutes of commercials per 30 minutes of show? There are a few good original shows coming out now, but for most people, a few shows subsidize 200 channels of stuff they don’t care about in addition to lots of ads, so higher rates aren’t really justified.

Yes! Historians of the future can debate whether they’re more misleading than the unemployment numbers reported, but they’re definitely ‘adjusted’ to sell a mostly-false narrative that inflation is low.

If any of the things that YOU buy experience higher rates of inflation, then it’s costs will dominate your budget. This is particularly compelling when the item is a non-optional part of your expenses 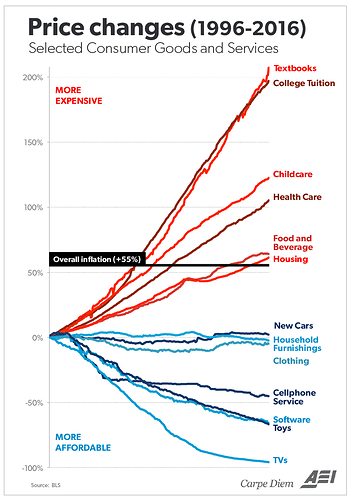 Sure, inflation is low … if you’re only buying luxuries. Necessities, on the other hand, have skyrocketed. But for people who own houses outright, have paid off their student loans (or had their parents pay for college), and don’t have to worry about childcare or healthcare, it might look nice.

Another chart with a different perspective still tells the tale that options like recreation and apparel have remained low while necessities like medical care, housing, and transportation have not: 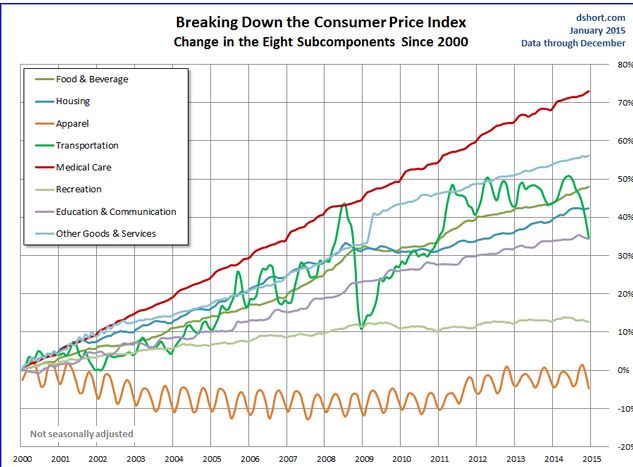 The trouble is, with cost-of-living increases being based largely on the published numbers (which seem more based on cost of luxuries rather than necessities), it’s a compounded effect over time. This is why we’re all experiencing crippling effects from ‘low’ inflation.

Where does cable fit into that picture? It has become a necessary utility, almost as much as electricity and water. Not for the TV, but for the internet connectivity. Schools and employers expect you to have it, friends and family communicate online rather than via written letter or voice phone calls, many people telecommute. As it becomes a necessity, they’re free to inflate the prices. (And due to monopolies, they can still claim to have the lowest prices…because they have the only prices.)

I’ve long suspected that the reason we see prices of some things rise faster than inflation comes down to reduced upper marginal tax rates. When the people profiting the most from any business are not properly taxed, they will raise the prices on their product to maximise their income. Had we a same upper rate like 90%, those increases will benefit the profit makers less and can even negatively effect them which reduces the attractiveness of price gouging and makes investing back in to the business or community a more attractive alternative.

As I’ve said here a score of times, if we can have Eisenhower’s or JFK’s whole tax code back, top to bottom, deductions and credits just as they were, brackets adjusted for inflation since then, I’ll gladly take the top tax rates of those years.

Just getting rid of the '70’s bracket creep would be worth it.

Hey, posting a chart from AEI is treading on thin ice here at boingboing. Borders on doubleplusungoodthink.

I always try to find a citation from Mother Jones or the Guardian or somewhere similar when I want to point out a fact. It’s the spoonful of sugar which helps the medicine go down.

Chart makes a good point though. The expenses which have gone up like a bottle rocket are those for which the U.S. taxpayer is on the hook.

Hah! I hadn’t noticed that. I don’t even remember where I originally saw it. Maybe that explains why it triggers many people to jump into the “highly-regulated vs less-regulated” thought pattern while I still see it as necessities vs. entertainment/luxuries.

The other thing that’s easy to see here is the more labor intensive the product, the greater the rise in costs.

Got rid of cable (actually satellite) a few years back, because I got tired of surfing dozens of channels to find the one thing worth watching, as well as having to watch commercials as well (although I obviously muted them)
now I just watch netflix, curiousity, and the other odd streaming thing… Since we have kids, we limit the tv to an hour or so. (Though that is a battle admittedly).

But I did note that when I got satellite around 2003 it was around $35 a month and by the time I dropped it in around 2011 the monthly cost had gone up to around $70 a month (especially with their increasing system access fee).