Gamergate "running out of heroes"

When I called them terrorists previously, I was underestimating the level of stupid-paranoid-deluded-offensive that they’re putting on display.

Pretty sure that in the minds of the people who would use the phrase “Jew controlled media” either a) the holocaust didn’t actually happen and Hitler has been the victim of terrible character assassination; or b) the Jews actually orchestrated the holocaust against their own people so that they could get control of Israel in the fall-out.

A spontaneously appearing GG supporter in an anti-GamerGate thread:
“GamerGate is all about corruption in game journalism! Sure there are a few bad apples but you can’t judge everybody by that! We even have women supporting us!”

Virtually Everyone in Every pro-GamerGate thread:
“Look at all these SJWs and feminists brainwashing everybody!”

In fact I like the idea of a hero worship shirt illustrating the anti-expression hypocritical activists of thezoepost/gamergate story. 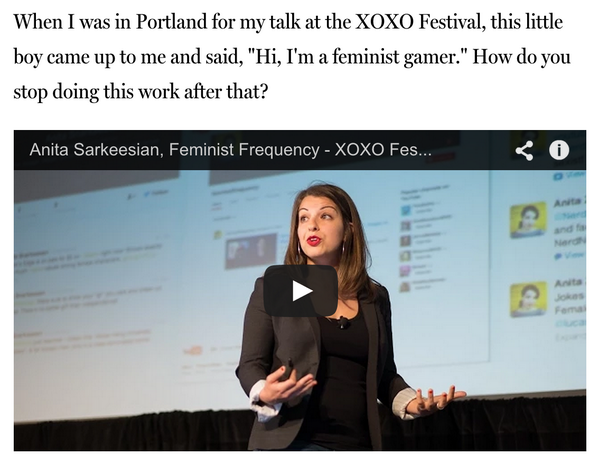 Well, it raised a chuckle from me, and it’s the first and probably only one this farrago will…

Rape and death threats. You’re a cretin if you think people are willing to expose themselves to this shit just to garner more likes on Facebook.

For some reason, this thread makes me want to make a web video of me jacking off on a GG shirt with Tina Turner’s “We Don’t Need Another Hero” as the soundtrack.

I think the last gasp is always the loudest. In any event, it’s mostly out of their hands. The mainstream gaming industry has taken note of their issues. Big companies like Bioware have not only been actively working toward a better gender representation, they’ve had Sarkeesian speak there*. Even if these guys are the new hires of the gaming companies, there’s older, wiser heads in charge.

Companies are still going to make “Army Shooter Game #2284” because that stuff sells. But they’re thinking about new ways to tell the stories. I know I mention this example a lot, but Guild Wars 2 finished off a storyline in which 7/9 major characters were female. And people noticed. Specifically, there were complaints that there “were not enough guys”. Which, to me, is brilliant because the ratio is swapped in 99.9% of other games and most people don’t even notice.

So maybe these guys won’t grow up, but things are going to move along without them.

*Source: a buddy of mine at Bioware. IDK if he was supposed to mention it, but I’m not under NDA to Bioware.

Dunno, yesterday Sterling posted a picture on tumblr mocking SJW. Would be nice to know whether he’s aware of gamergate.

LW is short for “Literally Who”. Cute eh, serves both to deny them an identity and to hide who they are talking about from casual visitors.

They crowdsource a g*mergate convention where they can be around their allies. NO SJWs ALLOWED. Those who have made themselves the celebrities of the GG movement to cash in on their newfound fandoms.

So basically Penny Arcade Expo, but everyone gets a dickwolf T-shirt as they walk in?

They’re all upset about Dara Ó Briain today too…

Actually, it looks like PAX is on their blacklist (I know, I too was surprised).

Amusingly though, their boycotts seem to be having the effect of driving UP traffic to the sites they are boycotting.

I found his line “When your media doesn’t represent you, or actively attacks you as it has here, it’s not your media” to be fairly telling though - he seems to be aligning with the “those people making death/rape threats aren’t really representative of us (No True Gamer?) but we’ll hitch along with them anyway” camp, which I suppose isn’t really surprising, given PA’s audience…

I wouldn’t pay too much attention to what they say. They’ll just say they wish they hadn’t spoken up later on…

As much good work as those guys do, I am often depressed at their choice of petards.

Amusingly though, their boycotts seem to be having the effect of driving UP traffic to the sites they are boycotting.

This is a problem with boycotting an internet site. It’s not like boycotting a thing that a person would have to go to a store to buy. When you boycott Pepsi (is anyone boycotting Pepsi right now? someone has got to be) you have to admit a small possibility that someone will read about it and think, “Hey, I haven’t had a Pepsi in a while, I like Pepsi, I’ll go buy a Pepsi.” But that person would have to actually get up and do that right now for your boycott to have an unintentionally opposite effect. Mostly, this won’t happen.

On the other hand, when you boycott a website, well, it’s just a click away to see what you are boycotting. I had never visited Gamasutra before last week (two weeks ago? who knows) but then someone got mad at them so I went and read the “offending” article, stayed to look at the rest of the site a bit, and wrote a letter to Intel threatening to boycott them if they continued their action against this site that I really don’t care about. That all took me much less time than it would have taken me to get a Pepsi.