Here's the real story behind the "Choose Your Own Adventure" books

Very! As a kid who most desperately wanted to play D&D and had no one to play with, this was the next best thing.

I had to settle for making an endless series of characters until I was finally able to put together a gaming group in high school (I think I was 8 when someone gave me the red dragon box starter set). 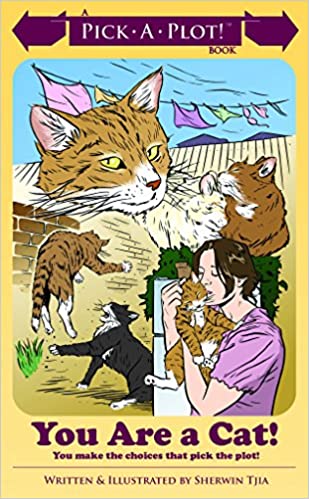 Then ‘Ace of Aces’ which I regret no longer having was like a choose your own adventure real time dogfight:

Bonkers. There were western showdowns and Pern thread fighting too! Now there was a game mechanic that broke my young mind.

There was a series of 1-on-1 adventure gamebooks like the dogfighting gamebook you pictured. Each player had a book and they’d tell their opponent what page they were on; if your page listed the opponent’s page it meant you were in the same place and could fight it out.

I think I still have a couple of them, including Battle for the Ancient Robot (a science fiction one) and Dragonsword of Lankhmar (fantasy, where one player plays Fafhrd and the Gray Mouser), in my storage locker.

I wish more of these old and out of print (sadly likely also out of license) books were available in electronic editions. I’d pay a couple bucks for a PDF of these books.

Before Fighting Fantasy there was Tunnels and Trolls solo dungeons

Then ‘Ace of Aces’ which I regret no longer having was like a choose your own adventure real time dogfight: 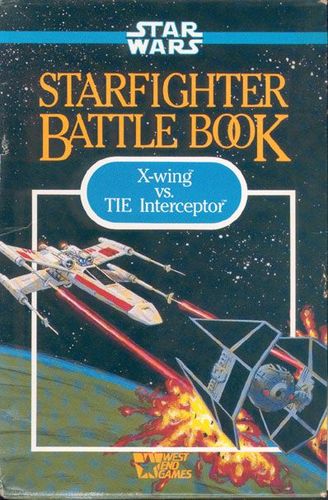 I used to love Joe Dever’s Lone Wolf gamebooks as a kid. 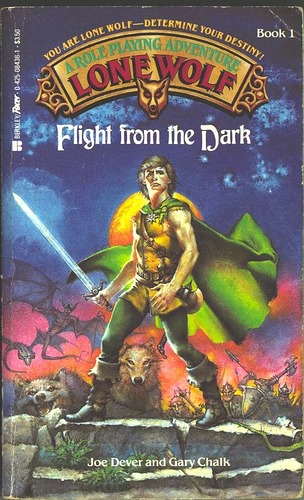 I loved the Lone Wolf books. Although they did suffer a bit from power creep as you advanced through the series

Please tell me they kept the interior illustrations at least?

The art style was so characteristic of the series.

Just a minor nitpick, but there are two game authors named Steve Jackson.

Somewhere in a box I still have an old copy of White Dwarf with a photo of the two Steve Jacksons meeting.

Between the US and UK editions? Gary Chalk is listed as illustrator for both of them, so I believe so. 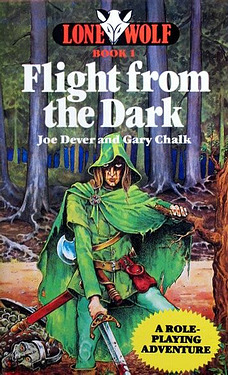 I would like to hear the story of the three alert peas.

I used to get nervous about a choice, so I’d save the spot with my finger. Eventually I’d have 6 fingers jammed into various spots in the books. I now do the same thing with saves in video games.

You’re in luck! And as with any story of its kind you can go back and choose to hear the story of the three big skinny beanpoles instead.

Before Fighting Fantasy there was Tunnels and Trolls solo dungeons

I have a chart that looks similar when I started a CYOA story a few years ago, except I stopped after completing one full story path and the rest is just planned. It’s fun as a writer to be able to pursue those different paths because that’s what you already sort of do when you plot it out, except know you have to remember what you changed and keep it straight when writing the subsequential steps.

I used to love Joe Dever’s Lone Wolf gamebooks as a kid.

the Lone Wolf book series is mostly online now (the site doesn’t have the rights to the last book AFAIK). They are the British versions, not the butchered US versions which were not a success.

It’s interesting they should have those particular books in the picture for this article:

The couple other Choose Your Owns I’ve read over the years didn’t really stand out much for me, but those two still stick prominently in my memory.

there was also a Stainless Steel Rat CYOA. I don’t remember it being particularly good, but hey, Slippery Jim. 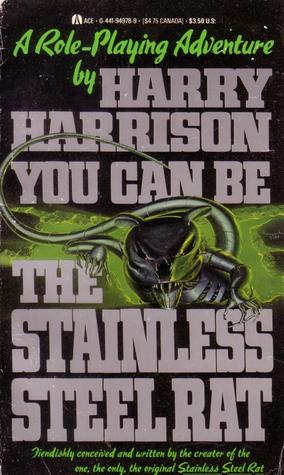