So… I does work exactly like I thought it would when I first read about it.

The video indicates that this project really needs to be done in-house at Apple to get the software integration. The size of the gizmo is actually very small by electronics standards, but that’s still several times too fat to be pleasant. I am utterly unsurprised that it’s not a viable thing.

Too bad for the people who thought it would be a slam-dunk. They’ve learned an important lesson about expectations.

That review was fucking excellent.

You can buy those! Check out these rather suggestive ET finger extensions. You could stuff the electronics in the end.

You could stuff the electronics in the end.

You could stuff the electronics in the end.

The comments are taking about lawsuits, among other things. One said

All but one time he swipes really fast and it doesn’t work. The single time that he used a slower, more even movement, it worked. While the ring may still be glitchy and hopelessly unusable, I can’t really tell from this review. I also don’t agree that it’s that big, considering all the components that have to fit in there.

I looked into the idea of using touchable holograms for creating passive feedback. If you could have a system with each finger “touching” a hologram input with on/off then you could do some pretty sophisticated menu navigation as a starting point for gesture control.

But when I talked with the lead engineer about touchable holograms, I learned that tech is also extremely iffy. Perhaps just some kind of air movement to create a field you interact with would work to get that tactile feedback.

You know, I thought the same thing, he didn’t really try and gesture like every example from the company. They show the hand basically stable and nothing but the index finger moving, he was always using more hand movement trying to make the gesture and they used what amounts to a tiny, finger only sized gesture.

But I still think the ring is poop and liked his review overall.

Since you sound like one atypically familar with the field; do you know if there has been much work with the (likely simpler; but less elegant) approach of mechanically or electrically stimulating the user’s hands via gloves with embedded active elements, rather than the (far cooler; but rather hairier) attempts to create some sort of tactile structure in the air?

Surely, that would be active feedback since I imagine it would generated in real-time by computer? But this is just terminology nitpicking

The Ring certainly looks pointless and awful, but starting your review by throwing the product around is maybe not the best way to convey that you’re going to give this thing a fair shot.

Perhaps just some kind of air movement to create a field you interact with would work to get that tactile feedback.

Good thinking. Googling “ultrasound haptic” yielded some results.
I chose one for an example: 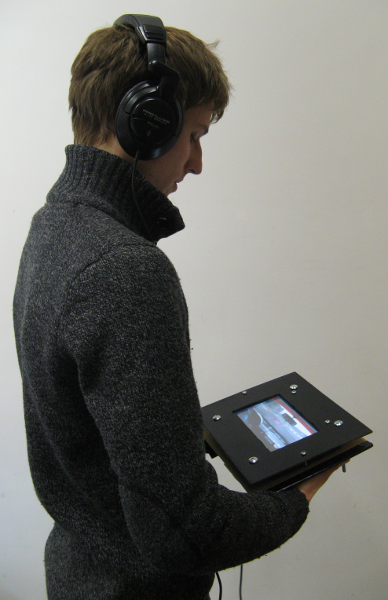 A system that allows users to experience multi-point haptic feedback above an interactive surface without having to touch or hold any device will be unveiled this week [Friday 11 October] at one of the world's most important conferences for...

I worked with devices used by surgeons in ORs, so in that case we were specifically looking for ones that would work for them. For the most part surgeons tell nurses working in a less sterile area of the OR what they need on a computer if it’s just a matter of data entry or changing to different screen, but there are a few programs where it makes sense for the surgeon to operate the software.

We were aware of gloves and even discussed the idea of using a special color of glove that a computer could use to identify hands, but I think that the idea was nixed because surgeons have favorite brands of gloves they like to use and were unlikely to adopt a special glove.

There have been over the years a lot of hands-free type of controls for surgeons, like heads up displays (a la Google glass), audio controls, foot pedals (which are used but not with computers - I think with the scope cameras to capture video or images is the main way they use those) and on and on. But anything that interrupts the surgeon’s focus is a problem, which is why it was so important that the computer control be really solid and not just something that worked if you moved your hand just so. I think all those attempts are pretty much in the graveyard because none of them had anywhere close to the consistency of a mouse or touchscreen.

One device I thought was promising was a bracelet that could sense movements of the wrist.

That looks so cool. This is definitely the frontier being explored now. I’ve seen so many videos of devices like this, but when we would get our hands on them and try to make them work for our applications, a lot of times we’d find that they could be demoed successfully by a skilled operator but could not be used by an average person.

I know that one of them is going to hit and hit big. I think it is so exciting.

There will probably be a million companies that go under on the way to figuring gesture control out, but the one that makes it will be very successful. I wish these guys all the best of luck because it will be game changing tech when it gets worked out.

Also, the ring guys - I wouldn’t count them totally out. They delivered a (crappy, barely working) version 1.0, so now maybe they can make it smaller and get the software working. Seems useful for controlling PowerPoint for a presenter to me.

I’ve seen some projects that used the Microsoft Kinect for just that purpose.

Yes, there is some great work going on with the Kinect. It compares really well to a very high end time of flight camera and with the open source software there are some neat things happening. Here is a Kinect OR hack, but as you can see, it’s still very crude compared with mouse control:

is mouse control compatible with sterility?

Sometimes they use plastic over stuff, but I think it’s still really hard to do a setup where the actual surgeon can use the mouse.

Here’s a guy showing how sterility works (about 3:30) - you can see how specific it is for the surgeon to keep hands in a certain place: