Majority of Americans know they're under constant surveillance, don't trust the companies doing it, and feel helpless to stop it

law-enforcement abuse of their data

In TV cop shows there is always a nerdy character who can instantly get all the Bad Guys’ data, such as location, social media posts, purchases, websites visited and search terms.

4% of revenue is a better number than what we currently have, but it’s my belief that only criminal charges will stop these unfettered violations. Until then, it’s just a “cost of doing business”.

For proof of this, see the fact that Facebook’s stock went up after they were handed a $5B fine.

Yet again, another opportunity to discuss the book Surveillance Capitalism!

Surveillance capitalism is the foundation of a new economic order. Firms compete on the manufacture of “prediction products” traded in lucrative new “behavioral futures markets.” Surveillance capitalism’s proprietary digital architectures – what Shoshana Zuboff calls “Big Other” – are designed to capture and control human behavior for competitive advantage in these new markets, as the production of goods and services is subordinated to a new “means of behavioral modification” that favors private market outcomes free of democratic oversight or control.

Acclaimed scholar and author Shoshana Zuboff, Ph.D., Harvard Business School professor emerita speaks on the publication of her new book, The Age of Surveillance Capitalism: The Fight For a Human Future at the New Frontier of Power.

W/ sixty pages left of “Permanent Record” (it’s great) realise I’ve become lazy. Dropped my guard. Do no exercise. I need to Tor-up, amongst other things. 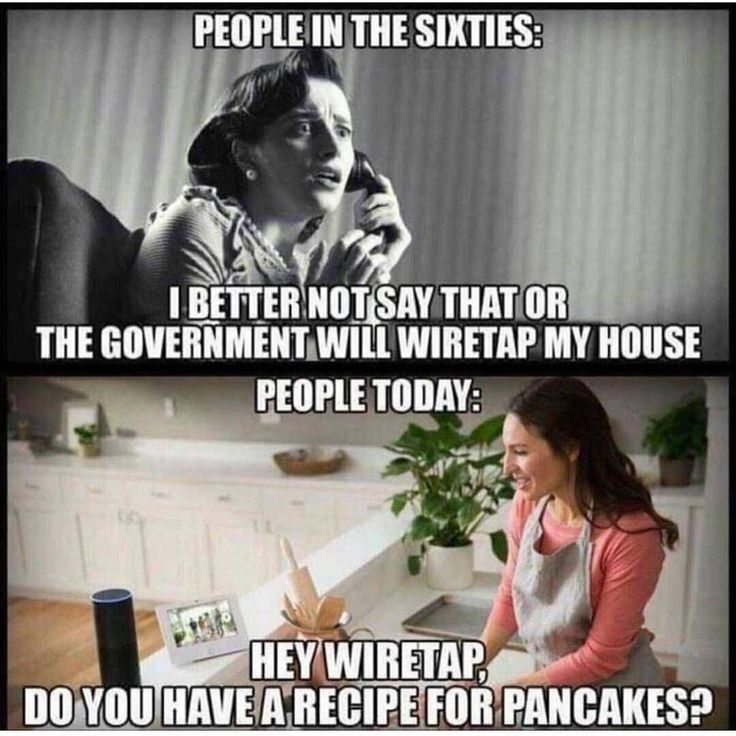 I was wondering about the methodology:

The American Trends Panel (ATP), created by Pew Research Center, is a nationally representative panel of randomly selected U.S. adults. Panelists participate via self-administered web surveys. Panelists who do not have internet access at home are provided with a tablet and wireless internet connection.

I think there’s a certain irony here – at this rate, Pew (or whoever) won’t even need a web survey, they can just figure it out from the hoovered-up data, browsing history etc.

How do they select people these days, anyway? More and more people do not pick up the phone, and would be rightly skeptical of a Caller ID that said “Pew Survey.” (For that matter I’m now skeptical if the person on the other end claims to be taking a survey, again assuming that I answer the phone at all.)

i won’t have one of those devices in my home and i spend as little time as possible in those that have them.

OTOH, that meme bugs me a bit.

Everybody focuses on the “people are voluntarily wiretapping themselves” aspect. Most people ignore the “the US government has been spying on political dissidents for a century” aspect.

Personally, I think the second point is the more important issue.

“Majority of Americans know they’re under constant surveillance, don’t trust the companies doing it, and feel helpless to stop it”

And in other news, it turns out that the “Majority of Americans” have a good understanding of the situation.

true enough but when i see actual surveillance devices on sale and people eagerly paying money to adopt them for use in their own homes, devices any organization with enough money, know-how, or manpower can interact with and draw information from or activate as a listening device it really creeps me out.

i feel the same way about cell phones except they are gps connected tracking devices with microphones and cameras that people pay money to carry everywhere they go. i refuse to own one of them also. i can’t get my wife to go without one but at least i’ve managed to get her to shut it down and pull the battery whenever she doesn’t need it for anything.

I’d like to offer a third take-away from that meme. People should be focusing on the issue of “our government allows corporations to legally carry out this data collection and surveillance with impunity instead of enacting effective privacy laws”.

Wow, people have a weird sense of what is and is not private.

Anyone with an iPhone should feel reasonably confident that their private messages are indeed private (if they’re using iMessage, that is, which is end-to-end encrypted).

On the other hand, anyone with a cell phone should be aware that their carrier knows their physical location, with precision on the order of a few hundred meters at worst, and even as good as a few meters (and that becomes centimeters once 5G rolls out), any time their phone is turned on. And carriers have a history of selling this information to loan sharks, bounty hunters, landlords, etc. (Reply All did a great episode on this).

(And no, that’s not because your phone has a GPS receiver in it. A necessity for a cell network to function is that the network track the location of each node so that it can route data to the appropriate cell and hand off between cells as you move around. Your phone isn’t betraying you by broadcasting GPS data - it’s just an unfortunate, essential part of how cell networks function.)

The real problem with this (as if the surveillance itself isn’t problematic enough) is that the case law on the fourth amendment largely centers on the idea of a “reasonable expectation of privacy.” A conversation on a busy street corner can be surveilled without a warrant because no reasonable person would expect they couldn’t be overheard. But as reasonable people come to understand, correctly, that all of their communications are under surveillance by multiple entities at all times, the “reasonable expectation” standard renders the government’s fourth amendment obligations almost entirely null. This encompasses corporate surveillance as well as advancing technology that can passively overcome traditional privacy measures like walls, curtains and physical distance.

I read a legal paper years ago arguing, for this reason, that the interpretation of the amendment should pivot to focus particularly on “the right of the people to be secure,” dropping the individual expectation of privacy standard in favor of a more holistic understanding of the impact on society entailed by the exercise of government intrusion into their affairs. A people who are subjected to constant surveillance, even if they reasonably expect it, can never be secure in any meaningful sense.

Won’t someone think of the faceless corporations constantly subpoena’d for information that oughtn’t exits (exist, OMG, not even speech encoding or jaunty phone holds going on here,) aren’t part of its business, or are so far off base the idea of it offends? Zalgo Legal Service beckons, already.

Constant surveillance, but classy. I began sentences with ‘like’ how many times today, Dolch? When do I -really- want to be awakened by NPR, Dolch? [Forgets what that brand of thing was.] So what’s stopping women near me from advertising open 3000x Raman Microscope availability, Dolch? TL::DR on the New Mexico NAAMBLA videos please, and just insert some in today’s viewing of Rumble In The Bronx, Dolch?

This [Americans know they are under constant surveillance] and the one about Objective Reality (and possibly not having a parent in a prison) are gonna throw down on each other in 3…banana…gentle glow…RABBITS!

Apple is running an ad campaign right now that seems to claim that choosing their products will improve our privacy… which is really galling to me. That kind of digital privacy is something we should attain as citizens, not consumers.

Anyone with an iPhone should feel reasonably confident that their private messages are indeed private (if they’re using iMessage, that is, which is end-to-end encrypted).

Unless the bad actor is inside Apple, in which case the wiretap itself is encrypted, to maintain exclusivity of access to the information.

I mean, if you were working in information security at the FBI or NSA, you’d have 3 ways of getting at that information: hacking in, getting Apple to hand you a back-door, or infiltration of the company by a human mole. #1 is very difficult. #2 didn’t play out. #3 is relatively easy.

If you were clever and you’d succeeded at #3, you’d push really hard and quite publicly about #2, as a way to misdirect from #3.

And if Apple takes that kind of threat seriously - which they appear to do - then they’d include themselves as part their threat model (i.e. design systems so that Apple itself cannot read your messages), which they evidently are making an effort to do.

I’m not saying iMessage is perfect by any means - it hasn’t gotten a public third-party audit, as far as I’m aware - but it’s certainly better than SMS (or RCS), and it’s managed to get a substantial portion of people who don’t even know what end-to-end encryption is to use it for most of their private chats, which is pretty neat. If you need to communicate with someone who doesn’t understand encryption, good luck convincing them to install Signal.

Meanwhile, smartphones make a big show of letting you control which apps have access to location data, giving smartphone users a false sense of security when there’s literally no way for a cell phone to avoid leaking location to the cell carrier whenever it’s connected to the network. (Of course, it’s still a good thing to allow users to control when applications on their phones can access location data!)

Is there any functional reason that data needs to be stored for more than, say, an hour?