This sentence is so low it’s absurd.

The judge’s name must be made public. He must be held accountable for his decision by the citizens of whatever district he is a judge for.

No fair showing the pic right away! Last time this was posted on BB we had to speculate as this gentleman’s skin color (with that sentence? are you kidding?)

Retired judge. Case was transferred to him. 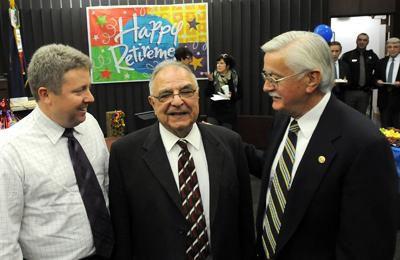 Viviano spent judicial half of his career guiding troubled youngsters Antonio "Tony" Viviano's passion for children is evidenced by his professional career and personal life. He has seven children and

While you’re looking for the judge’s name to add to the post you might want to edit the title. "Gentleman’ doesn’t seem a good fit. If he is out on his own recognizance during the week presumably he has to wear a sign around his neck warning people about his lack of moral judgement.

It does if you’re in on the joke. Around these parts, a “gentleman” is never a gentleman.

… the judge told her “Counsel, I do not let anybody speak after I’ve issued a judgment.”

It’s not that he has a messiah complex or anything. It’s just the talking interferes with his ability to hear the sad trombone.

This sentence is so low it’s absurd.

Right? So much for his plans to moonlight as a Starbucks barista on weekends.

Looks like the judge is a rehab sucker. He starts ranting about it with 13:20 left or so in the video.

He was worried that the defendant would re-enter society as a “hardened criminal” if he got time.

< sarcasm > Don’t worry, he only poisoned a woman, no one important. It’s not like he attacked another man! </ sarcasm >

Article here on how the prosecuter was concerned about the judge being too lenient prior to the trial: https://www.macombdaily.com/news/copscourts/macomb-prosecutor-seeks-prison-time-for-shelby-township-man-who/article_3ca2be74-b3b3-11e9-bd95-535039cbea9b.html

“This defendant deserves nothing less than a prison cell for his actions and that is what we will be stressing to Judge Viviano Thursday morning or we will be appealing the sentence, plain and simple,” Smith said in the release.

There’s an anti-ad blocker thing in place, but if you have an article reading mode, you can select the text and do a +1 Caesarean shift. Yes, really. 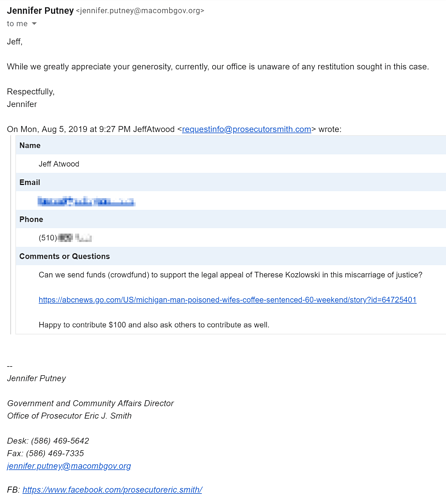 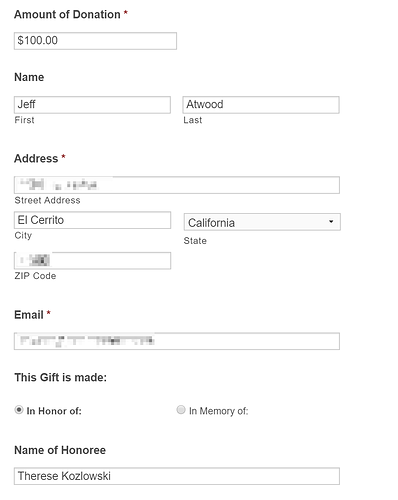 Turning Point began in 1980 through the grassroots efforts of community volunteers who wanted to provide a safe place for victims of domestic violence Turning Point opened with a 15-bed shelter and 24-hour crisis line. In 1986 sexual assault intervention and prevention were added to our mission. Located in the Metro Detroit, Tri-County area, Turning Point has a long history of providing advocacy for domestic and sexual assault survivors, both locally and throughout the State of Michigan

I have to say, I’ve become disenchanted to the point of nihilism with the “effect” of online discussion on… well, anything at all. You want to move the needle? It’s all about the

Sadly, dank gif memes have yet to change the world

< sarcasm > Hasn’t the poor man suffered enough? No point in ruining his life over one small mistake right? He comes from a good family right? </ sarcasm >

"In most jurisdictions, attempted murder charges consist of two elements:

How can this be anything other than Attempted Murder?

Did you not see? The man is so white, he even has blond hair! Ergo…

Did you not see? The man is so white, he even has blond hair! Ergo…

Apparently, he also peed in her shampoo. Total [monster].

There are a lot of very bad judges out there. My first instinct was that this one was probably corrupt, but after watching his thought processes in those videos, I think that he views himself as some sort of savior in the rehabilitation world. He seemed to view it as a personal failure if he did not prioritize rehabilitation over the other 3 pillars of his job: Protect society, punish the offender, and create a deterrent for future would-be offenders. He’s a judge with a personal mission.

I think that it is obvious that this guy will represent an ongoing threat to the victim- even more so now that she testified against him.