It would be great if Empty Greene became the face of transphobia, just due her innate vileness. I am not sure that is the fate of it, though. Her fans will love her for it, because they think the same thing, and the rest of us already think she is vile piece of shit. So no change.

…and before accusations were made about gay and trans people, some of the same talking points were weaponized against Black and Jewish people. Fascist bigots always demonize smaller groups with less cultural power, but their ultimate goal is control over everyone, everywhere, in order to enforce their agenda of hate.

some of the same talking points were weaponized against Black and Jewish people.

About 15 years or so ago, my mom used to be against same sex marriage - until one day, she finally realized that it was the same kind of bigoted bullshit that she could have been arrested for in the '60s for marrying a Black man and having kids with him.

Once she was able to frame it in a way that was personal, then suddenly ‘the light bulb came on.’

Sadly, far too many people simply can’t be bothered to give a fuck unless a problem personally impacts them.

@GenderGP
The shortest wait time for a first appointment at any of the seven NHS adult gender identity clinics in the UK is 37 months. The longest is 60. Five years. The wait for new referrals increases every year. #TransHealthcare gaytimes.co.uk/originals/the-…

Isaac discusses his transition and the lack of healthcare support for the transgender community in the United Kingdom.

Me at end of third consultation.

Me: “And when can I expect my next appointment?”

@GCAntisemitism
An important thread on Helen Joyce’s new book and how it promotes antisemitic conspiracy theories (and hypocrisy). twitter.com/docphoenix/sta…

Ah there it is, the expected antisemitic conspiracy book (disembodied what) https://t.co/ilFYp7CLRf https://t.co/RGyZikZL2Y

@hauntedloaf
@DocPhoenix "Trans people can't be poor, pharmaceutical companies make money from them" is a mind-bending take. By this logic, there can't be any poor cancer patients either. https://t.co/voQsMWYLVQ

The Protocols of the Elders of Hirschfeld.

Even before the dive into antisemitic conspiracy theories, the premise went well off the tracks. She writes about an “identity” almost like its possessing the body of the trans person, rather than the product of the mind inhabiting said body. What horrible shit right from the outset.

Who reads this crap? Never mind, I know it’s assholes all the way down.

It’s the antisemitism that will stick to them though. See the Labour party as an example, and a lot of that was just criticism of Israel (Yes, there were real antisemites in the Labour party, I’m not denying that). This is far right (((transgender agenda))) stuff.

Did he ever apologise for doing blackface in the 90s? Or any of the other racist Jason Lee shit he did?

Maybe he needs to be reminded that when Jewish people and fascists join forces, it rarely ends well for anyone Jewish.

And this is, of course, functioning as intended. Carry on.

It’s one of the down sides to gov health care. They manage their care to eliminate you.

Not that private insurance covered trans care back in the day or now. Most people I knew relied on DIY and black market meds. Myself included for years. Or sketchy docs who were “admirers” - that was …adjective failure 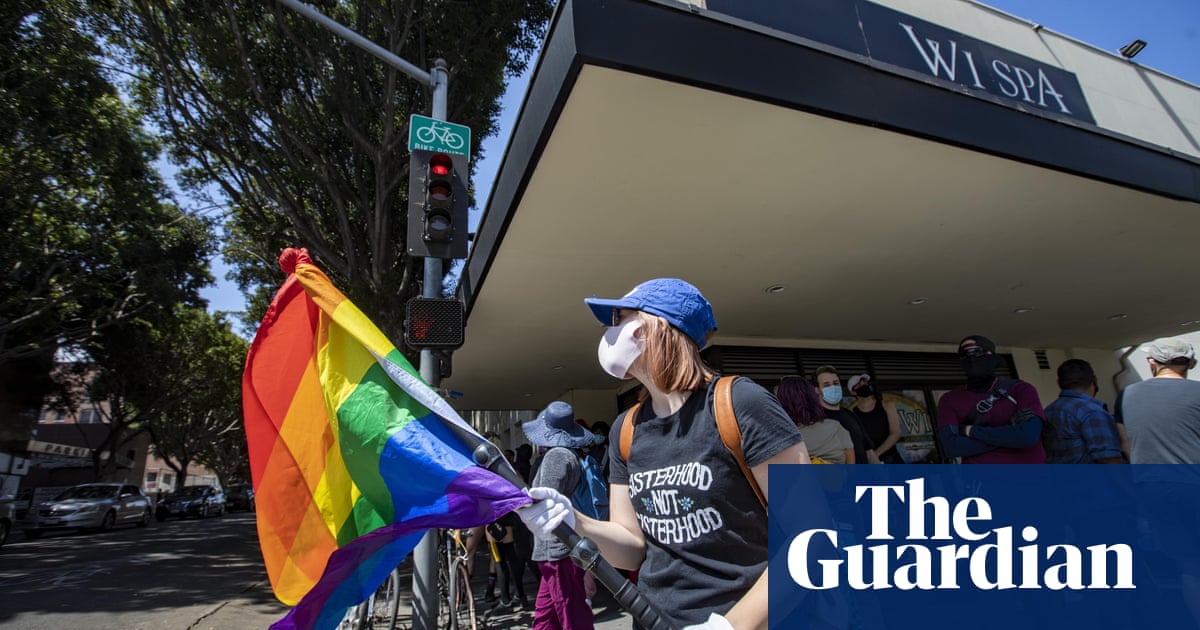 Wi Spa, a Koreatown business with a trans-inclusive policy, has become the target of a rightwing media storm

Another violent protest about a false event that didn’t actually happen. Not that it should have been a problem if it had. Attacking journalists too.

It took me a while to realise this is TODAY and not when it happened at the same place very recently.

We need to double up on our safety precautions. Not that I know what would actually help.

“ When you get to the corner
Don’t look at those freaks
Keep your head down low
And stay quick on your feet, oh yeah”

No shock this was spurred by Faux News, and the cops step in to protect the fascists from left wing counterprotesters. Next verse, same as the first.

I can just imagine a bunch of transphobic geniuses wondering why George Soros, a Jewish man born in 1930 would be so interested in funding transgender activism. What could be the possible link between Judaism and Transgender activism?

Soros fucking remembers the holocaust. It’s weird how a bunch of non-stupid people can figure out that no one is safe from oppression unless we all are.

@waterspider__
Woman was just shot by a rubber bullet as she asked to please put down your guns— https://t.co/YkZUjW007l

ETA: sorry, just realised that very same tweet was embedded in the article you linked to.

Magnus Hirschfeld was Jewish, but Havelock Ellis wasn’t. It’s like they are cherrypicking their data to fit their agenda.

What is interesting is how anarchism (social and individualist, not fake ayn-caps) keeps coming up in the history of transgender. There were several high profile anarchists associated with the Institut fur Sexualwissenschaft, and Havelock Ellis was influenced by the writings of Leo Tolstoy and Henry David Thoreau. Emma Goldman was also a supporter of trans people, once she realised that they weren’t bourgeois people.

It’s one of the down sides to gov health care. They manage their care to eliminate you.

It worked until the TERs ramped up their hate campaign about six years ago. Then things started going very wrong. This should be a warning to all NHS supporters, of how quickly government support can be withdrawn. The removal of trans healthcare is the test for privatising the NHS, how quickly can it be removed if the public support it.

Is it any wonder why social anarchism is so attractive to trans people? Transphobes cannot remove mutual aid.