I got my hands on a couple blasting caps in the mid-80’s as a kid. Adults are stoopud.

One of the stupidest things I did as a kid…

The local boy scout troop in my town met at a very old train station. Some of my friends found a box of railroad torpedoes (which were explosives signaling devices before the advent of radio – so you can imagine how old they were – that would be strapped to the track to alert an engineer of trouble ahead). 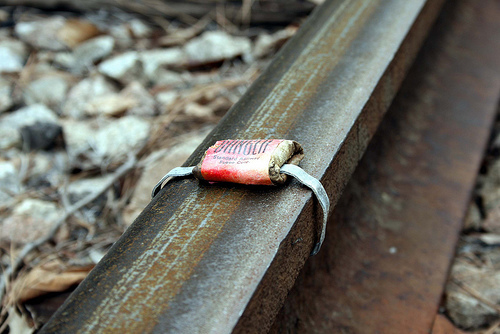 It was once easy to go to a back mountain general store and get blasting caps. I’m not saying they’d sell to a kid they didn’t know, but they were there. My father said it wasn’t hard to find such things in Pennsylvania growing up, but PA is mining country. According to him explosives were used for removing recalcitrant stumps, and were the kind of thing that were picked up intown, sans training, ID, or common sense.

My spouse’s brother once, as a teen, went spelunking in an abandoned mine and found a few sticks of old dynamite. It was all fun and games until somebody explaind about how dangerous it was and that touching that stuff could lead to headaches that would be suicide worthy. That ended well, but it could easily have ended up badly. I am also confident that the unlikely success added to the local lore about driving to the 49 and looking for abandoned mines.

For me, fear of weirdos in caves was instilled by the movie Mazes and Monsters.

I got my hands on a couple blasting caps in the mid-80’s as a kid.

So did Jay J. Armes.

That message really didn’t require the 10 minutes of plot and character development that led up to it.

My buddies and I used to play with them back in the 80’s… One of them had a neighbor who was a well driller, so he always had them on hand – he would actually give them to us.
Given all the stuff that I used do do with black powder and other things, it’s pretty amazing that I didn’t lose any digits.

It was in first grade that our class took a field trip to some sort of police exposition at the local fairgrounds. I don’t remember a whole lot about it. They had displays out of what drugs looked like, so that we could all learn to be good little narcs - of course there was the standard whispered discussion among classmates about whether the contents of the displays were real or not. The one thing that stuck with me, very closely and for a very long time, was the blasting cap display that in addition to sample devices included pictures of maimed hands, with the flesh torn from bone, and one in particular of a boy who had found one and for whatever reason put it in his mouth and bit it.

and one in particular of a boy who had found one and for whatever reason put it in his mouth and bit it.

I came across a cigar box full of them in a shed at a farm estate auction in Upstate New York in 1980. There were some kids playing in the shed so I notified the auctioneer about the caps. The parents - evidently city people spending a day in the country, were like, “What’s the big deal…?”

…and one in particular of a boy who had found one and for whatever reason put it in his mouth and bit it.

Pictures, or it didn’t … um … ah, no, I’ve changed my mind, no pictures, please, I believe you. Totally.

That’s actually one of the big differences in safety education over time. Real-life gruesomeness.

I remember in a boy scout motorboat safety class being shown a film that included a guy floating facedown in water after being run over by a boat. The prop had chopped a neat row of chunks right out of his spine. It made a real impression - I can still see it today in my mind.

Driver’s ed had that effect for me.

I took my in the late noughties, and the place I went to had a lot of old film reels and a reel-to-reel projector I helped the teacher setup.

Lots of footage from the 1970s from first responders running up to cars, seeing unresponsive people pretty badly fucked up. Then pulling them out of the wreckage, one-by-one, as they slumped onto the litter.

Family of four in a Buick that plowed through the median?