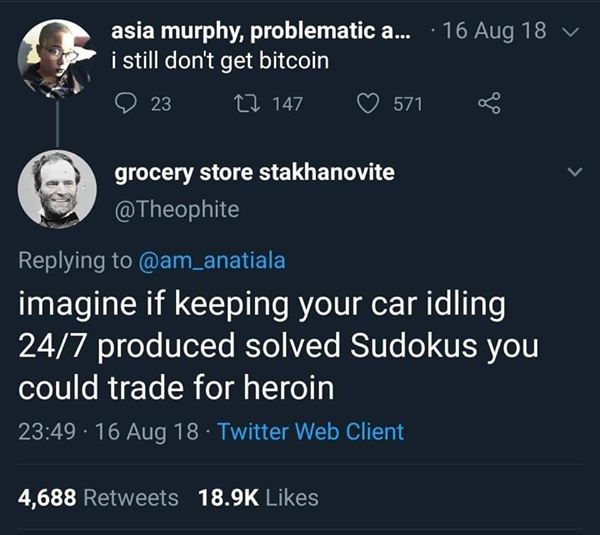 All fiat currencies are entirely faith-based. US dollars only have value because we all agree they do. There’s no asset backing them, same as crypto.

Close but no cigar. US$ have value because the US Federal Government only accepts your taxes in $. That’s 332m people who want US$ to give some of them to Uncle Sam.

More than 60% of US dollars are in circulation outside the United States. None of those people give a rat’s ass about paying US taxes. I have US dollars in my purse right now that I know have value because the US is a functioning democracy (ish).

Also, you can discuss the nuance of a point without being a dick about it, ‘Kay?

Just gotta say it’s such a pleasure to read smart people. So many of you here.

The thing I always say about blockchain is that it’s a really interesting solution in search of a problem. Libertarian currency is definitely not it. NFTs are definitely not it. Computer Scientists generally agree there’s something here, but nobody knows what yet.

I don’t have the chops to know if this makes sense (my software career in PC programming ended when MS-DOS died). Or if it’s a blockchain thing. But I keep having this idea that anonymous decentralized verification might be useful. A token I attach to an email, tweet, vlog, whevs, that says “this is mine” or “this was posted by me, not some scammer”. Verifiable by a blockchain. Maybe PGP in a blockchain?

A person could have multiple tokens for different. Business, personal, private, fark-alt, dark-net, tokens. And combinations of these, like a hash of “Company” + “Personal” = “Employee”, or “Partner1” + “Partner2” + “Child1”+“Adopted-Child1” = “My Family”. All verifiable in the anonymous, all-purpose, rust-free blockchain!

I’m rambling. Like I said before, I’ve no business thinking on this. There’s likely some sort of system like this already, or there’s no real need for it. Just brain-dumping. Usually I do that in private, but seemed like a good idea here. YMMV.

A little further thought suggests such an identification system is likely a Bad Idea from a privacy POV.