What has Trump lied about today, chart edition, Sept 22

This data visualization is no better than it was yesterday. The lines add no discernible meaning to the “chart” other than making it look like a chart.

Make sure to keep getting That Man’s name out there!

Once was interesting, but I’m not sure this is worthy of being a regular thing.

So this is a list of lies? And the truth is stop and frisk is effective, racism didn’t exist before 2008, she is bringing 620,000 refugees her first year, and so on?

FFS, somebody please tell the guy his title is confusing AF?

I’d quibble that pastors are allowed to talk about politics “all they want.” The Internal Revenue Code does absolutely forbid an exempt organization from endorsing, supporting, or opposing any particular candidate for elected public office.

The Internal Revenue Code does, however, allow a 501©(3) organization (which can include a church or religious organization) to engage in “lobbying,” defined as attempting to influence legislation (at any level of government), public referenda or initiatives, or constitutional amendments. Churches and other nonprofits exempt under 501©(3) just can’t engage in substantial lobbying. What qualifies as substantial or insubstantial, however, is vague and amorphous when it comes to churches.

This continues to be a really bad execution of a laudable idea. There isn’t a logic to the use of shapes or of connectors, and different blocks of text function differently.

For a better daily digest of Trump lies, see a bunch of the recent reports filed by Daniel Dale, Washington correspondent for The Toronto Star. His digests lack colored shapes, and I’m not even saying they’re necessarily comprehensive - but unlike these quondam charts the’re comprehensible.

Maybe we can change the graph style: 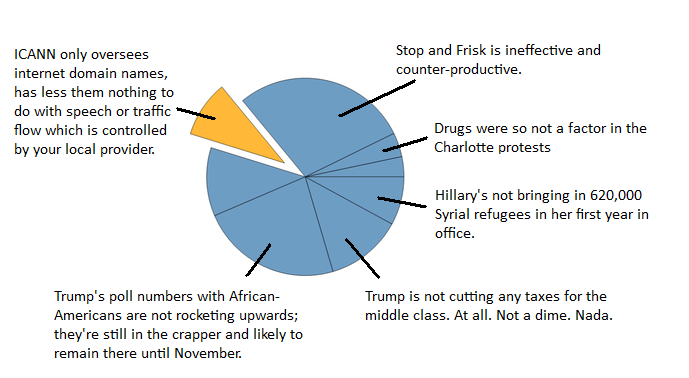 The number of lies does not astonish me.

What truly does astonish me is that anyone would willingly subject themselves to listening to 10+ statements by a politician every day just to make a chart.

It becomes even more incomprehensible when you consider that the politician in question is Trump.

Making a bullet pointed list, sticking it into random shapes, then randomly connecting those shapes with lines does not make it a “chart”. Or is that the joke?

One always wonders with Trump what is deliberate lying and what is does not know or care what the actual truth is. He says what sounds good to him and what he thinks will sound good to his audience. Do you think Trump has any clue at all what ICANN really does? I don’t. Do I think he cares one way or the other? No. And of course, many normal politicians will dissemble and obfuscate, but Trump’s pronouncements often are incomprehensible word salads. He’s stupid, uninformed, and doesn’t give a shit about the truth. This is why he never admits to being wrong, no matter what is presented to him as facts, because in his head what he says is the reality.

Somehow it does capture the feeling of these bizarre pronouncements swirling about in a chaotic manner, while we are being told over and over that they are part of something we are accustomed to considering a real and organized thing called a “political campaign”