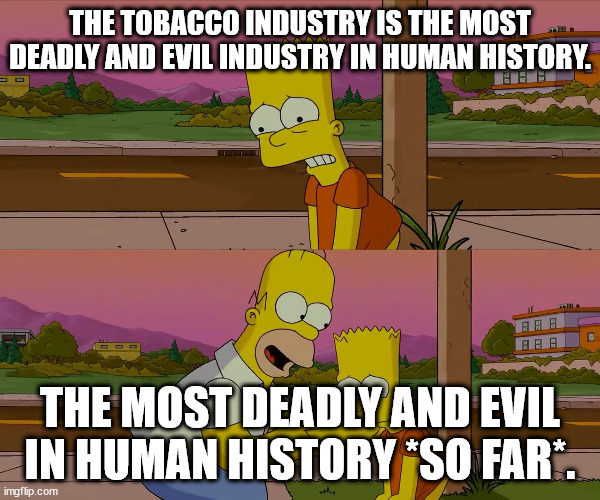 Worst day of my life

An image tagged worst day of my life

@Tribune
the guy I know who smokes the most pot smokes steadily all day, but not chain-smoking. his smoke breaks are – at most – comparable to the the moderate cigarette smokers I’ve known.

the big difference is he’s not consuming an entire joint or bowl each time. he packs a one-hitter and that’s it until next break. the smoke going into his lungs is a fraction, maybe ⅒ (?), of a tobacco cigarette. so the total each day is probably between one and two whole cigarettes worth of smoking.

it ain’t healthy, but when was the last time you knew a tobacco smoker who kept their consumption to 2 cigarettes per day? personally, my answer is “none.”

there was an apocryphal anecdote my English teacher told us that he read in e.g. the newspaper or something: going to work (or in our case, highschool) in downtown Nashville in the late 80s and breathing the air all day was equivalent to smoking a pack of cigarettes. I guess the industrial pollution and commuter exhaust settled in the river basin. there was also a thermal plant burning stuff to produce heat for buildings. I have trouble believing it was a whole packs’ worth, but that’s what it said, anyway.

Cigarette smoker. It’s been a long while since I looked into it. But there’s vanishingly few comparative studies about different forms of smoking tobacco, and practically nil between tobacco and other products. Legal or not. I doubt there’s been much more since I last dug around.

And the proviso that the cigar smoker was not inhaling.The important detail that real world incidence of lung cancer in cigar smokers is higher than non-smokers. So there is a known risk, even if tracking studies couldn’t quantify it.

Other than that all I could ever find were comparisons for smokeless tobacco vs cigarettes. And I could never find anything besides assumptions and speculation backing the wide claims that whole leaf vaporizers were in anyway less risky.

It seems like the x-factor these studies pegged was inhalation. But “number of cigars” is a pretty shit way to calculate how much tobacco some one is consuming. They’re not uniform the way cigarettes mostly are. So I think weight would be better, and the thing they missed is the actual volume of tobacco consumed.

He’s not saying it’s harmless. He’s saying that the dire warnings about weed issued by the anti-drug propaganda industry were by-and-large bogus. When I was in 8th grade (early 1970s), they had some guy come into the PE class to talk about drugs. He said that he knew about one girl who “smoked niiine marry-wanna cigarettes in a row, and that made one of here eyes roll up into her head permanently!”

So you hear all this stuff, then try it yourself and find out that nothing you were told was true, which makes it only natural that you start doubting everything else you were told.

I remember having this argument with my friends as we were smoking weed in high school. One guy was adamant that it was totally harmless. I pointed out that you were inhaling smoke, which is never a good thing, and that it was even worse than cigarettes because it was unfiltered. He remained unconvinced.

His older brother was a great illustration of your point. He smoked so much weed so often that he was in a daze pretty much all the time. Couldn’t focus on anything, forgetful, etc - think of the act that Tommy Chong does, only with him it wasn’t an act. He eventually got busted and put on probation and had to pee in a jar once a week. He snapped out of the haze after a couple of weeks. He got his life back on track. I think he started smoking again after probation, but not nearly as much.

The other thing is the dire warnings about pot I grew up with had nothing to do with cancer risk or other realistic health warnings.

I know a couple people who Half Baked their way to emphysema and other smoking related problems.

I don’t know anyone who smoked one joint, immediately took up meth, killed their parents, then got teen pregnant with a neo-nazi.

I remember having this argument with my friends as we were smoking weed in high school. One guy was adamant that it was totally harmless. I pointed out that you were inhaling smoke, which is never a good thing, and that it was even worse than cigarettes because it was unfiltered. He remained unconvinced.

Well more recent research has shown that filters are pretty ineffective and the benefits in reducing a few compounds are probably more than canceled by making it easier to smoke more.

Yeah filters were originally marketed towards women. As a way to keep tobacco off your teeth, “milder flavor” and to hide lipstick marks on the backend of a cigarette hidden.

Health claims came in later as the damage from smoking became a bigger story. It’s one of those fun facts about cigarette marketing. Marlboro, before the Marlboro man, was created as a women’s cigarette. With the colored filter tip, originally red to match lipstick, the core feature of the brand.

That’s inverted now. Brown filters tend to be used on brands targeted at men and white filters for women. In part because Marlboro’s shift to cowboys and epic butchness created a long standing association.

I don’t think there was ever a reason to think that filters made things less damaging. Any research showing that came directly from Tobacco marketing, and many of them are poked with holes to alter the draw and flavor of the smoke.

And just from the little bit of pot smoking I do. I used to commonly put filters in joints, and despite protests from my stoner friends. There’s no perceivable difference.

I wonder if a racist assumption of inferiority has something to do with it. If tobacco marketers assumed that Black Americans lacked the ‘sophistication’ to enjoy a regular cigarette, they could presumably get them hooked by promoting a flavored product. Similar to how flavored vape products are marketed toward children. Racist projections often infantalize the targets of their prejudice, so this would seem to make sense.

That said, I have zero evidence or research, soooo…

Is it somehow worse than other cigarettes in terms of addiction, cancer rates, or some other health impacts?

As a teen we used to joke that menthols would poke holes in your lungs. But it turns out they are worse than non-menthols not necessary because the menthol itself is any worse (at least evidence is inconclusive).

They are worse because:

As to the why, it’s my understanding that it was just cynical marketing to start. In the 1950s, Philip Morris found that Black smokers slightly preferred menthol cigarettes to white smokers (like we’re talking single digit percentage points preference). Why? Nobody really knows. Tenuous, sure, but it was an angle and they created a marketing segment out of whole cloth and hugely ramped up marketing specifically to the Black demographic. Other brands followed suit and it became a “thing”. Billboards went up in predominantly Black neighborhoods, ads went into publications with predominantly Black readership like Ebony, there was a Kool Jazz Festival back in the day.

I’m sure the fact they were more addictive didn’t hurt either.

I used to smoke Kents, which were non-menthol but had a white filter. Strangers would walk towards me like they were going to bum a cigarette, clock the white filter, then casually arc away pretty regularly.
*shrugs * more lung darts for teenaged me.

there was a Kool Jazz Festival back in the day.

I’m pretty sure they banned cigarettes ads on TV sometime before I was born, but I remember that they did show them at the movie theater before the main feature. Your comment reminded me of “There’s only one way to play it…”

I remembered all of the ads for Kools and Newports tucked between the pages of Vibe and Jet magazine.

I recently helped my chargie sort through his grandmother’s collection of old Ebony and Jet magazines (Vibe wasn’t yet a thing in her day.)

Both being artists, we were on the lookout for some good retro pics of Black people that could be used in a collage we’re working on, so I actually flipped through all the pages of each issue… and I was immediately struck by how at least 50% of the content was all ads for cigarettes, alcohol and Black hair care products.

And the cig brands were always Kools or Newports.

You hit the nail on the head; malicious ‘targeted marketing’ played a huge part.

The menthol makes the cigs less harsh, and more pleasant, so people are more inclined to begin a habit rather than smoking one and deciding cigs taste terrible.

All of that, yes.

I got lucky and tried a terrible one as a kid, so the appeal was lost on me.

Same here, though every single adult in my family smoked cigarettes when I was growing up… it smelled God-awful, and I didn’t even know it back when I was forced to endure it perpetually.

(As an independent adult, my full sense of smell returned shortly after moving away from home… )

After I started smoking weed and realized that it was harmless

He was definitely saying it’s harmless.

I also don’t want to be alarmist; a joint now and then is not going to turn you into some kind of zombie or whatever. However, I’ve seen several people be addicted to weed (among them, my brother) and while it’s not as immediately or thoroughly self-destructive as some other drugs it can definitely do real harm if consumed habitually. They became forgetful, emotionally stunted and mentally unavailable. It also required a lot of work on their part and a lot of support from others to get rid of it. I’m all for legalization, but I think advocates are too quick to dismiss the negative effects and I think it’s important for people to be aware of those so they know to be careful.

it’s kind of like eating an entire birthday cake all by yourself.

Hey now. Let’s not go overboard with the judginess.

Oh my. I might hesitatingly call myself a cigar smoker (keep a humidor stocked with favorites, smoke one every few weeks and sometimes go months between smokes) I cannot imagine how my mouth would feel the next morning after smoking even two in one day. Ugh.

My experience (first tried pot in 1967, so yeah, I’m an old) has been that those with addictive personality traits are susceptible to problems with substance abuse of any drug, including pot. While it is clearly not physically addictive, contrary to governmental claims to discourage it, it can become habitual and harmful to some people. It can be used for entertainment, or it can be used in less helpful and more harmful ways.

IMHO. Your mileage may vary.

I miss smoking. The built in breaks in the day, the built in socializing, wherever I went there were my people. After quitting it was like, shit how do I meet people anymore.

My coworker smoked. She found out so much about what was REALLY going on behind the scenes while in the smoking area that I used to joke that if she quit, somebody else in the office would have to start, or we would be blindsided by events.

He literally said “After I started smoking weed and realized that it was harmless.”