my prior car, a 10th gen Honda Civic hatchback, had a bunch of adaptive cruise/lane keep assist/automatic emergency braking functionality. The AEB stopped me from rear-ending people a couple of times where I as a human would not have reacted fast enough. It also felt strangely like it was waiting until the last possible second and then braking as hard as possible, as I was aware of “oh this is not good-BEEEP screech!” On the other hand, it also did a poor job of staying in its lane and keeping me from straying out of my lane (mostly by telling me I was doing so when I was not), and the adaptive cruise one time decided to accelerate even though there was a vehicle in front of me. Also, it didn’t do anything to stop me from turning left immediately in front of a car coming at 45mph, which resulted in both cars being totaled. on the other hand, the safety systems in me and the other BMW also kept both of us from being injured in any way.

However, the rear-facing equivalents that detect people and cars moving behind me, with both that car and my current car, do a fantastic job of stopping me from backing up if something is there, especially if it’s just out of easy sight but within the radar sensors’ path. And the backup camera? Those should have been mandated the moment the technology was available, not ten years laterish.

Automobile safety technology hasn’t just made driving a little safer, it’s made it nearly an order of magnitude safer.

for other drivers. I just borrowed a Subaru Impreza to move into my new place. compared to the cars I used to drive in the 90s, the new style headrests that protect the heads of the driver and rear passengers make shoulder-checks very hard; thicker roof pillars also decrease visibility. this makes my usually non-driver self on foot or bike less visible. the things that protect people inside cages makes people outside of cages more vulnerable.

However, the rear-facing equivalents that detect people and cars moving behind me, with both that car and my current car, do a fantastic job of stopping me from backing up if something is there,

Oh, this, most certainly. I love my backup camera and warning system. I think this may have to do with the fact that this all relates to low speed to very low speed driving, at which it seems this stuff is far better than humans are. High speed, not so much.

I’m in a two car household. The main car has a screen in the dashboard so I can see what is behind me when the car is in reverse. When I drive the other one, I’ve caught myself staring at the radio while backing up. 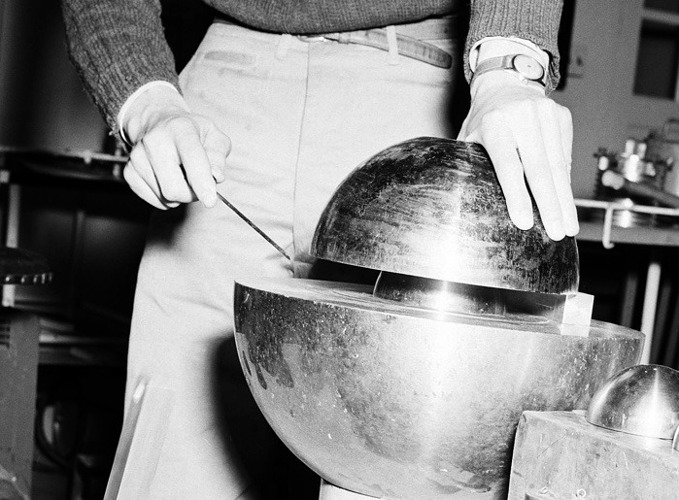 “I live in Boston, which is known among other things for having absolutely terrible drivers.”

I beg to differ. The roads around here are difficult. Which requires somewhat aggressive driving. But also requires, for the most part, good driving.

NY drivers are the most crazy, aggressive that I’ve seen.

Maybe it’s different now, but when I was there, Washington State had the absolutely worst, most clueless drivers I have ever seen anywhere - bar none.

When I drive a car, I prefer smaller ones, ideally with manual transmission.

Me too. And yes: right-turn-on-red is a menace to cyclists and pedestrians. 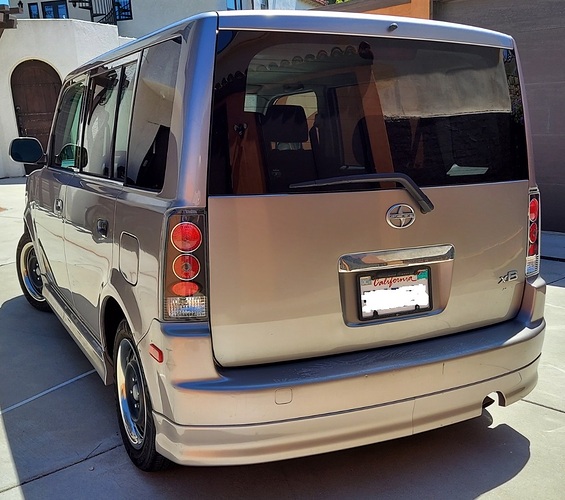 I have a 2017 Volt with ACC and it works beautifully when traffic is slow. It will creep along at 1 MPH if it has to. It is smoother than I am at keeping a safe distance from the bumper in front of me, even leaves room for someone to change lanes if they want (and backs off accordingly if someone does merge in)

For stop and go I have to tap the accelerator or press resume to move from a full stop, other than that, all I do is keep it in the lane. Not having to juggle brake and gas takes all the fatigue out of traffic jams.

It works well for dense slow traffic. It works well for open highway driving. You shouldn’t trust it as much on roads with intersections, as it will brake hard if a slow moving or stopped vehicle suddenly comes into range. It will stop, but the vehicle behind you might not!

The LKA is a different story. It won’t keep you in the center of the lane, it will only keep you from drifting out of it. If you don’t keep it straight yourself, you’ll be weaving. If it doesn’t sense any steering at all from you for something like a minute, even if it isn’t correcting, it will warn you to take the wheel. When it is active, the steering feels less responsive than when it’s off, like it is smoothing input. It doesn’t work at very low speed, or when there are too many vehicles for it to see the lines. So while ACC will handle the brakes and gas for you in stop and go, LKA won’t work at all.

My anecdotal experience was that during the pandemic, the roads were basically empty so many people treated them like their own personal race tracks. We got “spoiled” (so-to-speak) about being able to zip around town with no traffic and no legal consequences. As society has opened back up and we’ve returned to the pre-pandemic traffic patterns (or worse), that primitive, lizard brain, aggressive driving behavior is still beating against our prefrontal cortexes causing all sorts of mayhem on the roads. 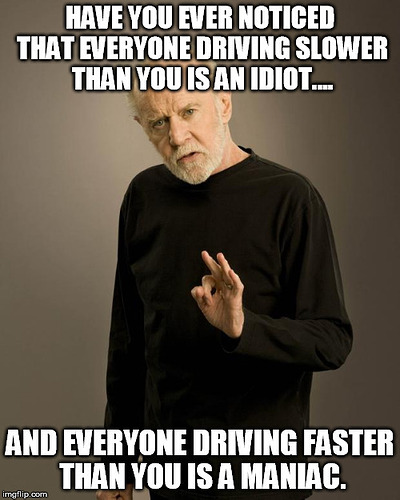 That sounds like a thought experiment. Is there data to support that?

I’d like to contribute some anecdotal evidence of this story’s conclusion. A few years ago, as a staffer for a since-defunct car enthusiasts’ magazine, I was driving a fully equipped SUV of some sort (they’re mostly the same, and I honestly don’t remember which model) with automatically emergency braking on the LA freeway. I am guilty of having to pass on the right another vehicle that was driving too slowly in the passing lane. I then tucked in ahead of him with what I thought was a safe distance, but the car in front of me changed lanes to the left at the same time, triggering my AEB, closing in the slower vehicle behind me very quickly. A bit less passing space and I would have been rear-ended at freeway speed.
–Todd Lassa
Founding Editor, The Hustings
Autoweek correspondent

Testing critical mass with a screwdriver? What could possibly go wrong?

Automated safety features in cars always make me suspicious. There’s no possible way they’ve gone through rigorous testing in all environments, and too much of what happens out there is unpredictable.

But I also am leery of these features because one of my car’s few automated features are antilock brakes that like to activated over the same manhole by a roundabout no matter what the road conditions are. I wish I could understand what was going on there.

I ride a motorcycle pretty much daily in southern California. I’ve been doing it for about 25 years. In the past 5 years or so, it seems like driving has become a gladiator contest. One thing I’ve really noticed is a vast increase in “chicken heading”. That’s what I call it when drivers continuously sneak quick glances down at their cell phones when they are moving along at mach Jesus.

I’ll use this to complain about my least favourite “safety” feature: the red warning alarm that shows up to tell you about traffic ahead coming at you rather fast. The problem is this big red alert takes my eyeballs away from the road where I should be looking.

That said, the rear camera on my brother’s car will tell you what the angle of your tires means to your parallel parking job. That one I like.

My biggest worry about this stuff is that it makes it feel “safer” to take your eyes off the road to return that text or whatever.

Maybe what’s needed is a safety feature that beeps when people take their eyes off the road for too long. What I notice more than phones is people turning their heads to talk with the person in the front passenger seat, or the back seat. When I see the driver’s head doing that, my next move is to get as far away from them as possible.

well, as you say, safety for motorists has been on the rise, yet the low point for pedestrian deaths from collisions was 2009. pedestrian deaths have increased 59% since then. although the iphone came out in 2007 iirc, so could be that, but hey, why not both that and decreased visibility due to the improved safety measures? could be a combined effect. or I could be totally wrong, but the fact is that pedestrian safety has decreased over roughly the same time period that auto occupant safety has increased. what do you attribute it to? 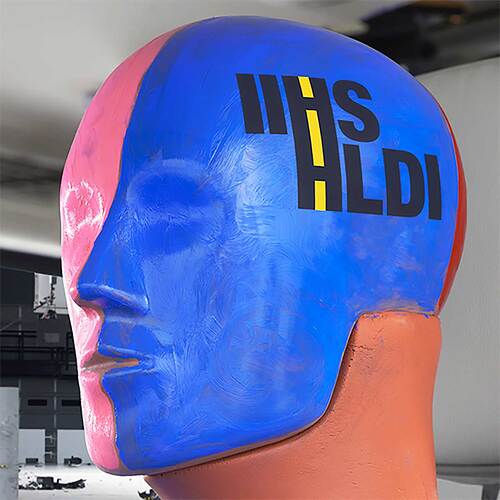 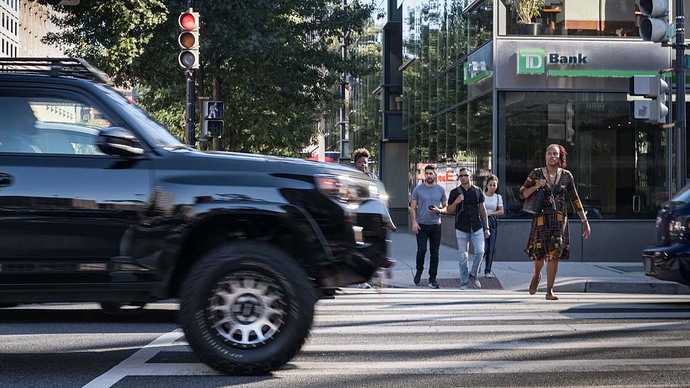 SUVs, which make up an increasingly large share of the vehicle fleet, are more likely to kill pedestrians than cars. Fresh designs haven't changed that.

The number of pedestrians killed by vehicles rose 53 percent from 2009 to 2018, the latest year for which statistics are available. Over the same period, the share of SUVs in the U.S. passenger vehicle fleet rose to 29 percent from 21 percent, according to vehicle registration data from IHS Markit. Pedestrians now account for nearly a fifth of all traffic fatalities — a proportion not seen since the early 1980s.

A previous IIHS study found that pedestrian crashes have become both deadlier and more frequent (see “Study highlights rising pedestrian deaths, points toward solutions,” May 8, 2018). Although pedestrian crashes most frequently involved cars, fatal single-vehicle crashes involving SUVs striking pedestrians increased 81 percent from 2009 to 2016, more than any other type of vehicle

currently, on a global level at least, the fatalities of people outside the cage are greater than for those inside the cage: 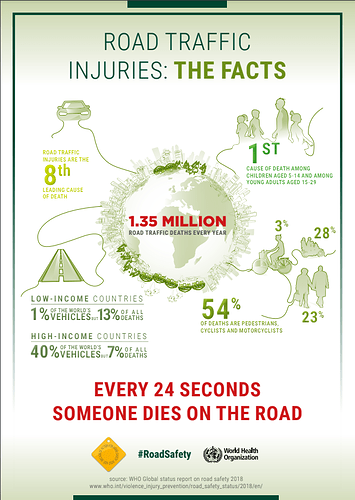 not exactly a smoking gun I admit, but that’s the best I could quickly and easily find.

Interesting. I wouldn’t be surprised if smart phones played a factor, but it’s probably a combination of things. Thanks.

it makes it feel “safer” to take your eyes off the road to return that text or whatever. That is terrifying. It is very, very far from autonomous driving as yet. Useful as an assistant, but hang up and drive.

Yep. I worked for an industrial / medical gas supply company, and driving was a huge part of their business - think of all those delivery trucks you’ve seen.

As part of signing my contract, they showed me a study that measured faster reaction times from drunk drivers than drivers talking on a hands-free phone. And the reaction times just got worse as you upped the phone-ness. No hands-free: worse. Texting: much worse than talking.

That was nearly a decade ago, and I still won’t use the phone - at all - while driving. I’ve not yet had a call or message that important, and I doubt I ever will.

What I notice more than phones is people turning their heads to talk with the person in the front passenger seat, or the back seat. When I see the driver’s head doing that, my next move is to get as far away from them as possible.

If it’s highway driving, I pull over and stretch my legs for about 2 minutes. That gives them a lead I can’t safely close. After I start again I drive anticipating broken glass and oil on the road, around the next bend.