$100 bills outnumber $1s, and they're stuffed in our mattresses

Small arms propellant is made from nitric acid and cellulose, so not really the same thing as fertilizer.

But you can get those from fertiliser. It might not be particularly efficient, but in an apocalyptic situation you probably won’t care much. Just be careful that you keep your limbs attached to your body.

None of this will affect me though. I have a low survival rate in this scenario, no matter how much of a prepper I choose to be.

That encapsulates the deep, fundamental silliness of the prepper fantasy. Gold is no more intrinsically valuable than money (unless you are a government, which can print one but not the other). For gold to be a useful medium of exchange requires an organised, universal consensus that prices everything in grams of gold - requires, in other words, a working society - and if you have that, you may as well use dollars and avoid the problems of dividing tiny bits of gold (to say nothing of coordinating the measurement of weight, which is by no means trivial).

Preppers imagine (/hope) they will outsmart their neighbors and relax with a cold beer and an Xbox when everyone else has reverted to a feral state. But that’s stupid. You can’t have civilization without civilization. We’re all, like, actively interconnected you dumb boobs. If you figured that out instead of voting for Turmp, maybe you wouldn’t have a reason to stockpile soup and guns.

You can’t have civilization without civilization. We’re all, like, actively interconnected you dumb boobs.

If you figured that out instead of voting for Turmp, maybe you wouldn’t have a reason to stockpile soup and guns.

The dark “humor” of the fall of civilization; more people will starve to death and from lack of potable water than they will from any external threats from other survivors.

Aren’t Mercury dimes supposed to be the go-to, currency-wise, when prepping for the apocalypse?

or airplane sized bottles of liquor.

Aren’t Mercury dimes supposed to be the go-to, currency-wise, when prepping for the apocalypse? 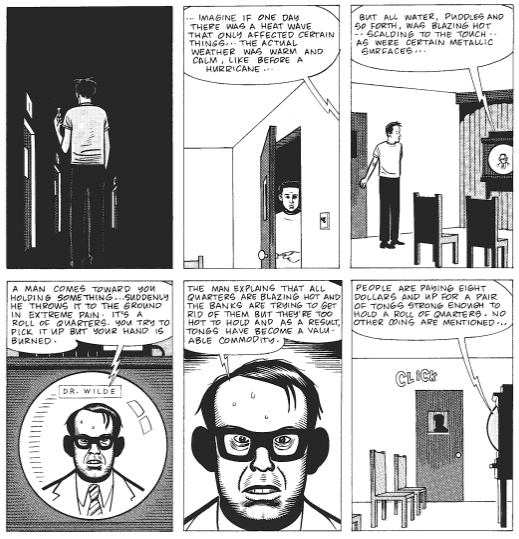 Actually, any pre-1964 silver coin. Roosevelt dimes, Washington quarters, Franklin halves, etc. “Sliders” preferred, as those have no additional numismatic value and are presumably only worth their silver melt value.

The folks buying gold From Glenn Beck aren’t typical preppers, they’re panicked middle class people who can be bilked into buying something that won 't help them.

Serious preppers don’t hoard gold for the obvious reasons. No one is going to be able to make change for a $20 gold piece worth a couple of thousand dollars. A silver dime worth a little more than a dollar, or a quarter, worth about $3 in silver would theoretically be useful in small transactions however.

That assumes they don’t just shoot you in the face and take your shit which seems far more likely.

For real post-apocalypse value, how about tools? Or am I just delusional that my collection of blacksmithing and primitive crafts tools would be of more value than gold rocks and pieces of paper? In the meanwhile, at least, I have a nicely tooled-up hobby and something to do with the extra space in my basement.

If infrastructure totally collapses, and these folks storing their Jim Bakker buckets get to live out their fantasy, it’ll probably be drastically less comfortable and survivable than they think. Unless they have barrel after barrel of water stored inside, you’re going to have to travel outside to get water. Your guns aren’t going to do you much good if someone can just snipe you from a distance, then steal all of your stuff.

If these preppers really wanted to “prep” they’d build little fortified villages with crop land and water sources inside the walls, just like old city states. Then maybe to increase comfort, incorporate outlying populations and govern them with some sort of local government. Of course, to prevent friction between contiguous areas, and work towards the common economic good, it’s better to incorporate all these patchwork governments into a larger state or country. OHMIGOD! PREPPERS, your ultimate prepper dream is to become the government!

Ironic, in a way. It’s just that most preppers (or people I’d categorize as preppers) I came in contact with seem to lean towards the “benevolent dictator” model of government. With, surprise, them on the upper tiers of that system.

Gold is no more intrinsically valuable than money [and] requires an organised, universal consensus that prices everything in grams of gold[.]

I’m not sure about intrinsical, but bold has a much higher practical value.

PREPPERS, your ultimate prepper dream is to become the government!

Do preppers even dispute that?

The thinking is, “everyone else is a fool and things should be run my way” – a train of thought we’ve all had – but what happens with preppers is that they jump off that train at the start, while most of us stick with it a little further and realise that the challenge is not being in charge, it’s figuring out how to work with each other.

I mean, if you literally want to live as a cave man, OK, but if you like having a TV and air conditioning and electric light and flushing toilets, then what you’re saying is that you like the civilisation we already have, and you shouldn’t be getting excited for it to come to an end.

I have snark, art skills and one paper dollar.
Guess I’ll give the States a miss in the End Times.

I think their ultimate goal is to be left alone, which I think a lot of people can relate to.

And there are different degrees of preparedness. From surviving a week or two, to a month or two, to a year or more. This includes water or at least water purification abilities. Some, depending where they live, use modern wells.

And those who really take self sufficiency seriously come up with some interesting hobbies that are fun in other ways. Like HAM radio operators who put it in their trucks, making a mobile communications unit with solar panels.

Of course, it’s hard to account for the buried and rat eaten portion of our $100s

OHMIGOD! PREPPERS, your ultimate prepper dream is to become the government!

Only in the sense of “government” being the feudal lordship to which they believe they’re destined to ascend.

I wish I had read more than just the headline before rushing home and slashing my mattress open looking for fat stacks.

I doubt that even half of them are inside the borders of the USA. It’s the most popular bill for illegal transactions worldwide.

It looks like you’re about right (and the headline isn’t): https://www.federalreserve.gov/pubs/bulletin/1996/1096lead.pdf

TL;DR - The treasury estimates that more than half of US currency is overseas, and that foreign demand for the $100 is much stronger than domestic demand.

That’s why I’ve been burying briefcases in my back yard for twenty years.