A glimpse at the future of online scientific discourse

Testing the Electric Universe There’s a cosmological model that has gained p...

I’d like to attempt a little experiment here. I’ve been heavily criticized on BoingBoing for making a case for the Electric Universe. People seem to imagine that this idea has been thoroughly debunked, even though my own investigation forces me to disagree.

The reason I focus so much upon this controversy is that, in the process of studying the debate, I’ve come to plainly observe that the arguments commonly lodged against the EU are completely inadequate, and are frequently permeated by misunderstandings. Making this case in a manner which people are willing to read has proven to be far more challenging than identifying these misconceptions and weak arguments.

My larger purpose here is to imagine what the future of scientific discourse would look like on this topic: Take the existing debate, and add in an annotation layer which permits us to analyze our own decision-making processes on this specific issue. This is a form of thinking about thinking which – in theory – only becomes clear with the annotations. This same approach can be applied to scientific papers and scientific press releases.

Up until this point, my belief that annotations were a potential solution to the crisis we see with online scientific discourse was just a hypothesis. Now that I have a prototype in hand, I can see that this was more than just a guess. 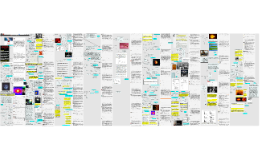 An Analysis of Brian Koberlein's Electric Universe Google Plus Thread

The Electric Universe is a cosmology which competes with the Big Bang. Many people, even professional scientists, have struggled to understand what it claims, and how much evidence supports it.

This is obviously just a static prototype. The final form would include URL links which access the resources and link into a knowledge graph via key concepts, among other features I’ve already discussed in prior threads. It would also obviously include an ability to add further annotations, and a system for rating contributions which prioritizes the visualization of these contributions.

(BTW: Although I am fairly confident in the accuracy of the content here, there may be sporadic technical mistakes)

It’s my belief that by building such systems, we can get a clearer picture for promising lines of investigation in science. I would go so far as to say that innovation in all of the disciplines of science will greatly benefit from systems that are designed to manage controversy and organize our conceptual knowledge.

This topic was automatically closed after 995 days. New replies are no longer allowed.