A Steampunk video time capsule from The Edwardian Ball 2015

Hmmmnnn. What is “Edwardian” about this?

I think it is more accurately a “Tim Burton Music Hall Burlesque” - ‘Not that there’s anything wrong with that…’ It does look like fun, but I hope that the revelers of 100 years hence have an idea that today’s society isn’t best historically represented by recreating Nicki Minaj at a strip club with 3D printers!

Steam? Steam is really late Georgian and Victorian. Edward VII really has us past the era of gas light into electricity and fuel oil.

Steam? Steam is really late Georgian and Victorian. Edward VII really has us past the era of gas light into electricity and fuel oil.

Are we really going to debate what era our alternative history anachronistic fantasy is set in?

What good is pedantry, if we cannot playfully exercise it?

But having Comte Robert de Montesquiou as your Avatar, you probably know this.

The décolletage makes me think more of an SCA event than a steampunk event.

What good is pedantry, if we cannot playfully exercise it?

You can’t be pedantic about Steampunk. You’ll drive yourself nuts. The whole thing is one giant anachronism.

I mean most of the men are wearing clothing that is clearly Gatsby inspired, books are happy to put Edwardian-era airships everywhere, everyone has a mid-18th century Matchlock or Flintlock rifle and everything is made out of brass as opposed to the steel or iron.

Dresses of that period often paired a skirt (many yards of fabric), with both afternoon and evening bodices (a much smaller amount of fabric). The afternon bodice had a proper collar: the evening bodice was low cut.

Which is a shame, because each decade is distinctive.
.

It’s videos like this that make me realize I have absolutely no sense of personal style.

Not really steampunk, but definitely edwardian

Helping artisans and makers to transform their creative passion into a real business that pays the rent and becomes a sustainable career.

aims to recreate this 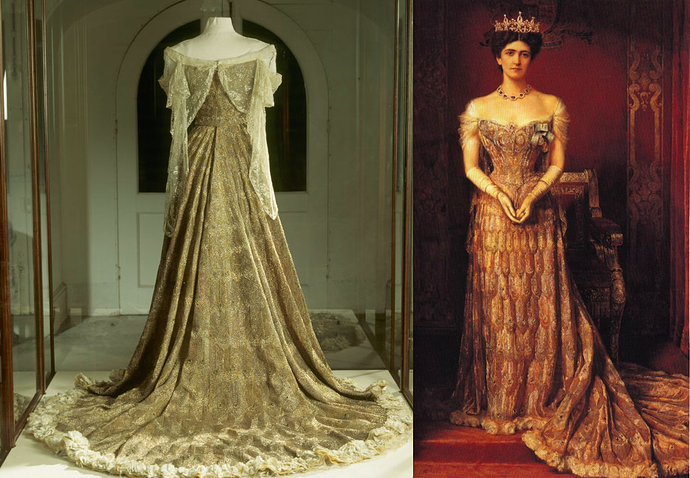 Indeed. The Analytical engine (which was to have run on steam) was first proposed in 1837. Babbage died in 1871.

Since dressing up is clearly an integral part of the steampunk scene, I’ll note that the “first bustle period” began in 1870. Before then, crinolines were the fashion. The design icon Oscar Wilde didn’t really become popular until ten years later. And the film Moulin Rouge which probably inspired some of the aesthetic choices of the Ball’s attendees is set in 1900– though Baz Luhrmann embraces the anachronism…

Gunning for the Pedant Pendant, she types… The Edwardian Ball started as an Edward Gorey Ball many years back in the Cat Club nightclub in San Francisco. It’s evolved into this grand multi-night thing in LA and SF, and although every year they do a staged version of an Edward Gorey story, it would be fair to say it’s much more Tim Burton/steampunk/fantasy/etc. at this point. But some people still DO come in high Edwardian style, while some push it out to the early flappers.

Yeah, there is no real steam in this punk.

Funny how everyone questions the steam but not the punk. Seems too well-behaved to be considered punk.

Oswald Bastable and “Warlords of the Air”. Not steam - but lighter-than-air punk.

The “Edwardian” refers to Edward Gorey, not Edward VII. At least the last one I went to a few years ago.

Edit: Whoops, missed @Elusis beating me to that. By two days.

Ah. Makes sense - but of course, substitutes an “in-joke” for a common cultural and academically defined reference to the 1900 period in the Anglophone world…