Proof is in the pudding…

Boing Boing, isn’t well beyond time to support the living hell out of Bernie Sanders’ campaign?

BoingBoing as a legal entity can certainly support the Sanders campaign if it chooses to, without restriction.

Thanks to the Supreme Court’s decision in Citizens United v. FEC.

Don’t ever think that you (and I) are not in the crosshairs.

BoingBoing as a legal entity

I’m not referring to a “legal entity”. I’m talking about the people behind Boing Boing.

[quote=“lolipop_jones, post:44, topic:70640”]
Thanks to the Supreme Court’s decision in Citizens United v. FEC.
[/quote]Thanks to that decision, legal entities have yet even more power over average people in the political process.

Stop fooling yourself. Citizens United is a political windfall for billionaires and corporatist interests promoted via SuperPACs, not for average Americans.

Yeah, but remember what that low price really means: not a lot of equity in real estate there. I’ll bet your house in a (not very special) part of L.A. would sell a lot faster than one in St. Louis county, Missouri.

There are legitimate practical and emotional reasons to own your home, but there are also times when the same reasons point toward renting instead.

But in any case, having the ability to choose between those two options is already a privilege: as the article points out, more and more Americans are getting shut out from being able to make that decision for themselves.

So the Public employees already sucking on the public tit get subsidized housing too?

In Chicago they finally had to grant an exception to public school teachers because all public employees are required to live within the city limits but a large percentage of teachers with families literally could not afford to do so.

What’s sucking us dry is the fact that an MBA graduate still wet behind the ears will make more in a year than most public employees make in 5 to 10 years.

Maybe if you consider the fact that public employees are in fact doing the work so that people like you can “suck the tit” of a civilized society you won’t mind them making a pittance anymore.

Except in times of extreme economic turmoil, when has rent ever gone down significantly. Marx was right, and the revolution will arrive the day mortgages and rents are beyond the financial capability of average people who watch empty homes remain empty. Where I live there are still entire neighborhoods of empty homes, cookie-cutter in style and poorly constructed, that are just waiting for people to be able to afford $350k.

The reporting at nytimes.com over the past 10 years generally supports the proposition that institutional and private equity firms acquired the majority of distresed mortgages and tended to liquidate rather than negotiate modifications with residents of those homes.

And many if not most of the properties returned to the market for rent or sale were acquired under legally questionable circumstances by private equity firms.

…In addition to Lone Star, other private equity firms have emerged as big buyers of troubled mortgages from federal agencies and banks. They include Bayview Asset Management, an affiliate of Blackstone Group, and Selene Investment Partners.

These firms have swarmed into troubled mortgages because they can squeeze profits from these loans by either restructuring them or by foreclosing on them and then repackaging the distressed loans into bonds that are sold to mutual funds and hedge funds.

Private equity’s push into the distressed mortgage market has produced some benefits. Thousands of homes that were abandoned by borrowers are now back on the market. In the HUD sales, about 10 percent of homes were vacant, according to the February report.

Still, housing advocates argue that federal housing agencies should make it easier for nonprofit organizations to have a better chance to compete for troubled mortgages, believing that these groups would work harder to avoid foreclosures.
…

Nothing just about it, I was born white and on first base and hit a single.

I plan to buy a second property someday, to rent out. Becuse I prefer property to financial instruments.

What I won’t be doing is buying 60 units, maintaining them to be barest standards of habitability, and extracting as much cash as I can from it.

You two appear to be talking directly past each other by the way. He seems to be talking to a caricature of a slumlord, and you would seem to be talking down to a college freshman, and neither of you (i assume) are either of those. Both of you have points to make, but stop taking it so personal.

Maybe if you consider the fact that public employees are in fact doing the work so that people like you can “suck the tit” of a civilized society you won’t mind them making a pittance anymore.

I don’t mind them making a pittance, but change society so that pittance is available. Most municipalities are strapped for money at this point, and no one wants their property taxes raised - yet that is the only solution to giving everyone more. I hate to bring reality and logic into this, but money just doesn’t appear. We can’t just pay people what we feel is fair, well we can but that means everyone must be willing to put in their share to make that possible (which also means your share decreases.) All this paying people more sounds great in theory, but show me the money stream, crunch the numbers and then I will listen. 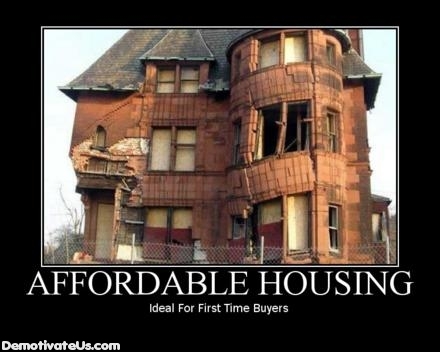 True that. The house next door just sold in about 48 hours. A developer swooped in with cash: $675k, for a tear-down (won’t this coming year be fun, with our ringside seat?). He also bought four other properties that week.

I’ve never been able to do anything but rent in L.A. And it accounts for way more than 30% of my income. We’re lucky that our landlord, who lives across the street (this was the home he grew up in), is a nice guy and hasn’t raised the rent for a few years.

I don’t mind them making a pittance, but change society so that pittance is available. Most municipalities are strapped for money at this point, and no one wants their property taxes raised - yet that is the only solution to giving everyone more.

Oh, ITA with you. It drives me nuts that people think it’s admirable to be cheats, to expect goods and services but not to pay for them. That’s what taxes are: payment for roads and schools and fire departments and libraries and water mains and creation/implementation of laws which keep our society relatively civil. If it’s not OK to walk into a store and take a sweater or a sandwich without paying, then it’s not OK to live in a society without paying taxes.

I’m out of likes, but thanks for the follow-up info.

Isn’t that a misunderstanding of the meaning of “poor”, or a failure to properly define “poor”?

hate to bring reality and logic into this, but money just doesn’t appear.

…The Dodd-Frank Act of 2010 set out to [restore fair allocation of risk]. Now, there would be “risk retention.” Lenders would have to have “skin in the game.” Not 100 percent of the risk, as in the old days when banks made mortgage loans and retained them until they were paid back, but enough to make the banks care whether the loans were repaid.

Barney Frank, former chairman of the House Financial Services Committee, said, “The loophole has eaten the rule, and there is no residential mortgage risk retention.”

[Regulators did not decide for four years.]

The result is that there will be no risk retention to speak of, at least on residential mortgage loans that are securitized.
…
READ MORE

Good job, but that has nothing to do with where I was going.

I was referencing this train of thought:

Democratically administered municipal corporations should be federally subsidized to acquire titles to rental properties subject to rent controlled long term leases benefitting low and midle inome residents, e.g., qualified teachers, law enforcement, social workers and firefighters.
[/quote][quote=“gellfex, post:18, topic:70640”]
So the Public employees already sucking on the public tit get subsidized housing too? (excepting social workers who are not typically govt’ employees, but work for nonprofits) And who pays for your grand giveaway? Shoddy thinking like this led to the terribly administered rent controls we do have. There’s a program for this called Section 8, it’s just that no one want to fund it. It’s easier to continue rent controls that often benefit those not in need, at the expense solely of property owners rather than the general public.
[/quote][quote=“Mindysan33, post:19, topic:70640”]
Employees are people who work. They get paid to do so. How is that “sucking off the public tit”?
[/quote][quote=“chgoliz, post:48, topic:70640”]
Maybe if you consider the fact that public employees are in fact doing the work so that people like you can “suck the tit” of a civilized society you won’t mind them making a pittance anymore.

People have a tendency to complain about what we pay our teachers and other public employees. You floated the idea of giving them subsidized or free housing with the notion that money/services are basically being injected back into the local economy. But how exactly is that to work? Is the county/state suppose to eminent domain foreclosed housing? Pay for them out of their budget? How about upkeep or insurance? You can even go the route of subsidized mortgages directly, but again you need capital to make that work. I can say I’d like to see anyone that is taking care of or teaching children have their pay doubled, but without some realistic way of making that happen it’s just me saying something.

The problem(s) that exist now have a lot to do with percentages. Sure you could raise property tax, but the less you make the more it hurts. You can add rules and tax codes to get the middle/upper to pay more but that just shrinks the middle lower. I’m not saying something doesn’t need to be done, and I certainly don’t have a solution, but just saying I’d like it to happen doesn’t make it possible.

If public employees are “making a pittance” compared to what they would be making elsewhere, there should be a lot of turnover in those jobs.

What can be done is to make it a lot easier (zoning, land use rules) to build affordable rental units, with a stipulation that such units have limits on rent increases or conversion to non-rental.

However, those who are perpetually gobsmacked by the concept of supply and demand rarely seem to catch on to this.

My house in St. Ann was something like $90K for 2000 square feet. It was built in the 40s, but had recently been remodeled. In the 5 years we’ve owned it we still had to replace the A/C unit and water heater, needed roof repairs twice (once due to a major storm), and leaky plumbing three times.

Still though. We went from an $800 rent on a two-bedroom apartment to a $750 mortgage on a 3-bedroom, 2-bath house with a fairly big yard.

just saying I’d like it to happen doesn’t make it possible.

That’s true that saying you’d like it to happen doesn’t make it possible. Those are generally questions of regulating access to credit, allocation of risk (“supply side” or “demand side”) and policing abuses. Political questions need thought, research, effort and cooperation among organized political constituencies.