'An illustrated guide to american personhood'

A “religious corporation” is by definition a not-for-profit!

The law does say that you can’t put certain corporations under “undue hardship” to comply with a law they disagree with. Here’s the problem with trying to claim it applies in this case all all. It costs either the same or less money to provide birth control to women as it does to provide birth and child care. In other words, they incur no financial hardship, and the workaround for allowing the employees to pay directly into a group pool for that portion of the insurance which would be applied to the birth control was already resolved in 2012 after the Blunt Amendment (a broader attempt at this same thing) failed in Congress.

Hobby Lobby owners have also personally financially invested in those evil businesses that make the contraceptives they so religiously disapprove of - including i.u.d.s.! 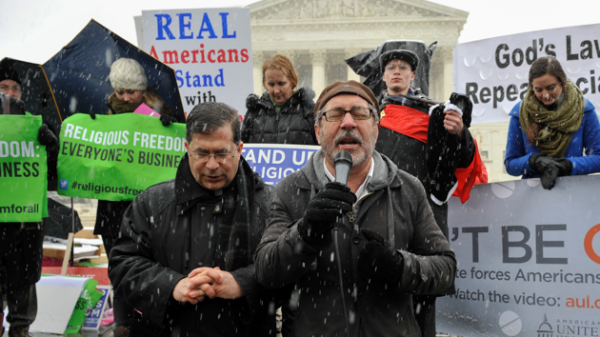 When Hobby Lobby filed its case against Obamacare's contraception mandate, its retirement plan had more than $73 million invested in funds with stakes in contraception makers.

The only real solution is to stop patronizing all corporations.

If it makes you happy another panel with a black teen boy could probably also get “meh” as could a person of indeterminate gender. Oops I said “person” didn’t I?

All white people are college educated and upper middle class just like all brown people are poor and uneducated… duh!

The image on the left is not accurate. I suspect the artist was unable to afford the very powerful microscope necessary to capture an image of a zygote.

Given the trend I believe I will someday be able to get the bacteria growing under my fingernails classified as a person with unencumbered speech, religious freedom, and the right to bear arms.

Corporations are made of ambitious people like our government is made of popular people.

people have a right to their religious freedoms just as much as woman have exclusive rights to there reproductive organs.there are 16 other options still on the table. the 4 that we are discussing here terminated viable fetuses. no one is being disenfranchised. when i as a male have the right to abort an unwanted fetus for my emotional stability then we can discuss equality in reproductive rights.

Problem solved, right? All of them get to be faceless concepts now!

Pretty much the only place in the country where the white dude isn’t front and center.

Well, I think it has a lot to do with their perception of religion, too.

Women have a right to their religious freedoms too, not just “corporations”.

Every single woman in the country has been disenfranchised, and life for their actual children is harmed as well.

We’re not talking about viable fetuses.

I know you’re a troll, but I’m sitting here waiting for tech support so I’ve got time to kill.

The first time you become pregnant… let us know.

Just calling it what it is though.

It’s every man’s right to have babies, if he wants them!

The only way we have of changing people’s behavior, short of direct, one-on-one voluntary behavior modification or by force, is to change the environments that they operate in. The legal and economic structures that define the world also define the avenues for action that individuals have. Changing the structure of, and rules that govern corporations is the only way to change the behavior of individuals operating within them.

My religion says I don’t have to listen to trolls. Why are you oppressing my religious freedoms?

A corporation itself cannot hold a religious view. However, it can act on behalf of those that control it,

There was a time when a corporation didn’t just serve those who control it and was chartered as a public trust for a limited amount of time. I think we desperately need to struggle to get corporations back into that form before they do anymore damage than they’ve already done. Corporations in their current form are too dangerous and concentrate far too much power in the hands of the few. It’s as anti-democratic as one can get bordering on fascism.

Sigh… I wish people understood what a corporation is a bit better. And what corporate personhood is. It’s a convenient fiction

Hyperbole would be more pointless if it weren’t for people crying about “Double Taxation”(whine, whine, the legal fiction that protects me from financial liability in the event that my business loses money has to pay taxes because it’s an independent entity in order to so protect me! Cry!), and Verizon asserting that network throttling is its first amendment right and similar such stuff.

If users of ‘corporate personhood’ would agree to understand that it is supposed to be so strictly for the purposes of limited liability for investors (though, even there, I’m not sure we should extend it so easily and broadly as we do. Time was when forming a limited liability corporation took some doing, rather than being even easier than a drive-through wedding in Vegas); I’d be more than happy to not touch the subject.

I eagerly await the…dramatic… response when biotechnology makes that ‘right’ operationally relevant. I don’t know how many takers there will be; but the sheer volume of headsplosion on the reactionary side of the aisle when the first gay-married man with a synthwomb fathers a child, biologically speaking, will be remarkable.