i have no idea what you’re talking about, but I am loving the attitude and writing style. seriously, the world needs WAY more of this (as long as it’s a credible argument of course). too much BS gets too little aggressive challenge.

That was TV’s Frank from MST3K!

How about if we stop passing laws and let companies run their business the way they damn well please? That means, no anti discrimination laws, healthcare laws, no labor laws (within reason, I’m not arguing that 12 year olds should be hand dipping matchsticks next to spinning saw-blades).
Now bear with me here, in this day of instantaneous mass communication, wouldn’t the owner of restaurant that refuses to serve a gay couple or the company with horrific labor practices rapidly learn a lesson about responsibly running a business when what they are doing becomes known? Of course this assumes that people would boycott a business because it refused to serve X or had policy Y.
Besides, why would you WANT to force a business owner that hates everything you stand for to take your money? Why would you want to be employed by them? Why not just let them continue on their own ignorant path to ruination without your assistance?

Better idea - how about you move to Somalia and give a real free market a try?

Read Upton Sinclair’s “The Jungle”, then let me know if you still think that’s a good idea, because things like letting kids dip matches next to spinning blades is exactly the kind of thing that happens when companies are unregulated.

i have no idea what you’re talking about

Yeah I think I got there by the end, but a little background on this case would have helped coherence a lot. Laughed though.

If this passes, what is to stop the rest of the large corporations “converting” to a new religion that holds that once one becomes seriously ill the only proper medical care is for that person to commit suicide? Or whatever sect that doesn’t allow for most, if any modern medicine? Driven by the pure profit motive wouldn’t that make perfect sense? One religion is no more valid than another in the eyes of the law, true?

Oh, and I am sure every Styrofoam wreath and tube of glitter are only made in the Christian Chinese factories located in the “abortion-free” provinces. 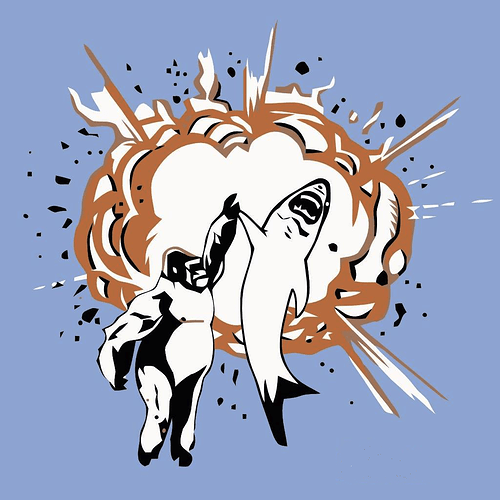 How about if we stop passing laws

(within reason, I’m not arguing that 12 year olds should be hand dipping matchsticks next to spinning saw-blades).

And fuck laws on fucking. That’s what I say.

Yes! So great to see that he’s still finding work even after Totally Biased folded.

The author demonstrates a misunderstanding of the lawsuit. Hobby Lobby did not object to paying for birth control pills. It objects to the morning after pill which it considers an abortifacient. There is no constitutional right to free birth control. There is a constitutional right to the freedom of religion. This was inserted into the bill by Democrats knowing it would spark a controversy and subsequent lawsuit. Everyone wanted a better system than what we had. The Democrats simply overreached. There are more lawsuits coming. Little by little, the law will be diluted. Because of the heavy-handed ramrodding of the bill without any GOP support, the GOP will let the Dems stew in it until at least after the '14 elections and more likely the '16 presidential election. Some day, I would love to see a law passed for the good of the country, not the political spin of one side or the other.

If I consider toilets to be an abortifacient, does that mean I don’t have to provide toilets for my workers? If I consider heating and lighting to lead to sinful behavior, can I just ignore those OSHA regulations?

Considering something to be the case does not make it so. The morning after pill is a strong birth control pill. It prevents fertilization, meaning there is no abortion.

No, it is about religion. The problem is that they don’t believe their employees have any first amendment rights but they do. Just another in a long line of right wing religious crackpots who believe that they are not free to practice their religious beliefs unless they are also free to force others to practice them too.

And if the owners were devout Jehova’s Witnesses, could they refuse to pay for any medical procedure involving blood transfusion or organ transplant?

I believe in yoga, energy healing and accupuncture as vital to my spiritual practice. Can I refuse to cover employee costs related to Western medicine while paying for Reiki treatments?

Also, where is “capitalism” a guaranteed constitutional right?

How about if we stop passing laws and let companies run their business
the way they damn well please? That means, no anti discrimination laws,
healthcare laws, no labor laws…

Because the straight white christian men who are still in control of most things in this country are just barely descended from people who thought it was ok to keep other humans as slaves and had to be told by the government that our constitution guarantees the same rights and privileges to EVERYONE in this country, regardless of what they look like or who they like to fuck.

Get ramrodding, democrats, ramrod like you’ve never ramrodded before!

No, really. We tried this already. It didn’t work. It didn’t work incredibly. That’s why food was so awful in the late 19th century, and we had to pass a Pure Food and Drug Act; that’s why we had to form the EPA after the Cuyahoga River caught fire; and why we had the Great Recession after we completely deregulated investment bankers.

Stop it. Just fucking stop it. The GOP would never, never support any kind of health insurance for anybody at all. They have no interest in doing so. And you have no evidence that they do. Don’t come on here pretending otherwise.