Anti-protest sign at Mall of America is epically dystopian

Did a quick google search, and sure enough, couldn’t any such thing as a publicly-owned mall or municipality-owned mall. Odd, you’d think some city would have tried it.

Well, the Mall of America itself seemed pretty dystopian last time I bumbled my way in there. Couldn 't leave fast enough. Ugh.

By hiring a lia… er, lawyer to argue it for you, and hoping that the “rioter” had less money to spend on lawyers than you. The same way you hire someone to lie for you about anything else.

Few things for the dissenters.

Are guns that uncommon in American society that one can rely on ones fellow protestors not to be armed?

Because when you’re argument kind of sucks and is really weak the next best thing is exaggerations and hyperbole. Sadly most people don’t realize this only weakens a persons toothless argument further.

I haven’t read about anything that fits that description occurring. Though I suppose some “angry black men” can be uncreatively interpreted as a threat of violence.

Depends on your level of cynicism.

Honestly, I couldn’t decide whether I wanted to know if there was an actual legal standard, or if I just wanted to express contempt for the arbitrariness of the legal system.

Had I seen the picture unattributed, I would have thought it was some sort of viral marketing campaign. (I mean, that OBEY thing is pretty widespread.)

Somewhere out there, some marketing executive is probably already weighing the cost of smashing one of those giant screens versus potential advertising revenue.

Trespass to land in English, and I think US, law is, or at least used to be, a tort not a crime. Of course in practice in both the US and the UK now, almost everything that the police or government don’t like is regarded as a crime so perhaps these nice distinctions don’t matter anymore.

I think the close equivalent is “business district”.

if someone asks you to leave their property, and you don’t, you’re trespassing

There’s the important extra step in there between violating mall policy and being arrested, though - telling someone, “You’re violating mall policy, therefore I’m going to have to ask you to leave” and then allowing them to do so (or not do so, at which point you can have them arrested for trespass). You don’t get to skip to that step.

Though I suppose some “angry black men” can be uncreatively interpreted as a threat of violence.

The “angry” bit is optional. For too many people, “breathing black men” are interpreted as a threat of violence.

Somebody is going to be held responsible for scuffing this floor!

I think this version of the message was even more dystopian – “THIS DEMONSTRATION IS NOT AUTHORIZED”.

Yeah, heaven forfend that we have any unauthorized demonstrations. 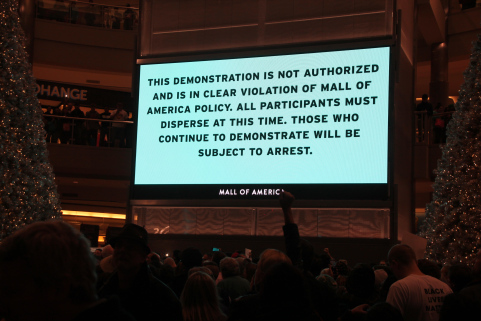 Yes, and the authorized demonstrations are so useful!

Depends on state law. In some states (Ohio), mall cops have pretty extensive rights. I don’t know about MN but given the way things work in the midwest, I wouldn’t be surprised if they had the right to detain.