The Christian Bible. Hands down.

Remember that story where some kids called Elisha a baldy, so he summoned two bears and they mauled the shit out of 40 little kids? Then god was like: “this is the morally correct thing to have happened”

BRB reading all these

Remember that story where [everybody died horribly]? Then God was like: “This is the morally correct thing to have happened!”

And then He did it again a few more times?

Classic God move, such a crowd-pleaser.

The Day of the Locust by Nathaniel West. It was the last book in a college course that I loved, but I hated that book. Nightmare fuel.

As it is said, shall it be done

“You’re an atheist because you’re angry at god”

“no, I’m an atheist because I’m not convinced a god exists. I’m antitheist because all the gods I’ve been told about are disgusting and morally repugnant.”

Carlos Castenada I tried to reread them years later and thought, WTH! This is just a guy getting stoned and thinking it’s something special. Even later I read it was all fake.

It’s not a super profound thing, but still:

The ending where the main character and his girlfriend were finally getting their relationship back together, she sacrifices herself to save the rest of the characters from cosmic horror. Maybe it’s trite, but I’m a pretty lonely person and it felt like a gut-punch to me since I was pretty attached to the characters. I was reading it in bed and basically couldn’t sleep that night, then felt awful for a few days after.

The Jungle made me a vegetarian for quite a long time.

But I used to read a lot of “strange but true occurrences” books as a kid about UFO encounters, alien abductions, ghost encounters, etc, and they really messed me up.

Atlas Shrugged. Not so much me reading it, but I live in a dystopian future where adherents of it believe it’s the gospel and act accordingly. Truly fucked up.

Yep, I dated a Christian at one point who kept asking me to read the bible. I did, and that was her mistake.

I love that whole series, but I can definitely identify with the gut punch.

House of Leaves. A book review of a book review of a film that may not exist, that’s either a terror story or a love story, told by an unreliable narrator. I still am struggling to figure out what in the hell was going on.

Dead Lines by Greg Bear. As ghost story fiction goes, his was delivered plausibly, which only pulled me in further. Reading it got me staring warily into dark corners.

Johnny Got His Gun – “is horrifying”

The movie is pretty fucking horrifying, too.

(Thanks, Metallica for making me curious about it back in the day after seeing the One video and getting me to seek it out and watch it.)

Sorry, I misread these posts and laughed. 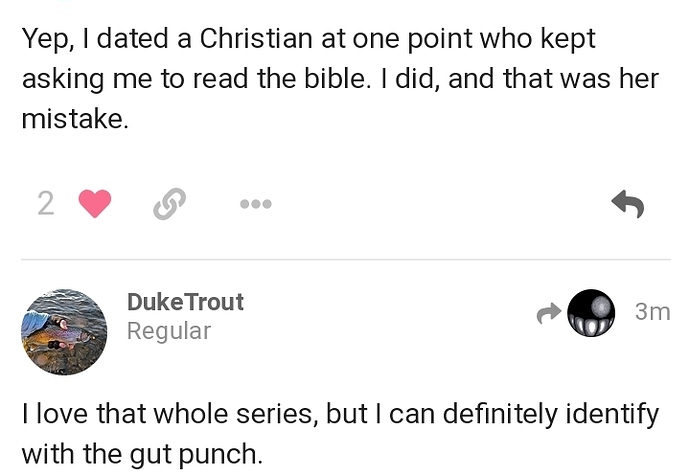 Thanks for the recommend, people.

Ahh, you beat me to it. Nothing quite like it. 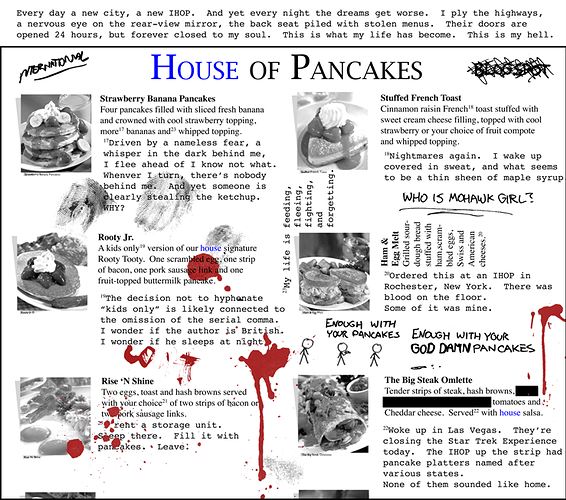 I also quite liked this old parody (though it makes no sense if you haven’t read the story first). Why it is consigned to the mists of Archive.org, I know not – though it’s kind of fitting.

(EDIT: Someone also put it on imgur, at least.)

Also, if graphic novels count, then there’s Junji Ito. Aragami Fault was quite enough; I’m not sure I need more of that.

Fragments of Horror – Wonderfully creepy stories that are as weird as they...