Aurion imagines a new history for Africa, free of its imperial past

This relates to the article but is a somewhat tangential point.

“Unlike most fantasy titles, where European lore and history serves as the backdrop”

One of my big issues with fantasy settings in so many things is they really don’t do that. They take inspiration from Lord of the Rings and latterly Dungeons and Dragons as well (which is basically a LotR/generic fantasy rip off). I also sort of blame the brothers grimm and disney. There will be a temperate climate, some castles, knights or whatever but that’s not really deeply drawing on traditions.

Those things have their roots in European history and so on but it’s very vaguely and really pretty much all history and traditional mythology has been expunged from them. So with most fantasy you get a distant copy of a creation whitewashed of most of the cultural baggage around it.

Japanese writer/developers will often embrace Japanese mythology in a way we never do with european mythology and include all the insane stuff and have created some absolutely incredible books/games/films very specifically based on very specific japanese myths.

We have so many brilliant myths in Europe but people doing medieval fantasy stuff never consider it let alone get creative enough to use it.

I’m hopeful that it looks like we are getting over LotRs and fantasy is becoming ever more creative again after the dark dark days of so much tedious unoriginal crap.

Jonathan Strange and Mr Norrell and The Ladies of Grace Adieu draw upon British mythology, folk mythology in a way that is astonishingly good and was so refreshing because Suzanna Clarke dared look back past the 1950s into the actual mythology that people now ignore. Similarly the amazing writer Alan Garner (read The Owl Service) draws very specifically on folk tales (he has been writing since the 60s but one of his latest books is specifically a collection of English folk tales).

It’s part of the reason GRR Martin is so much better than most other fantasy writers doing similar knights and medieval war type stuff. He copied and played with history rather than standard fantasy quest/hero narratives.

That’s not what the quote said… it said that Europe lore and history serves as a backdrop, it makes no real mention of how deep that is… And I agree that this is what makes the books you mention worthwhile, because they delve a bit deeper into those histories and traditions, which as someone with European roots, I appreciate. Add Neil Gaiman to that, as well.

However, they are still, in many ways, deeply euroentric works. There is nothing wrong with and much to like about looking outside of Europe and bringing fantasy to bear on other cultures. They are just as rich and deep as the European traditions, many of which are longer, in fact.

This is a pretty brilliant idea of counterfactual history. I also vaguely recall somebody wrote a story in which native Americans discovered Europe, which is not as farfetched as it sounds.

That sounds like an interesting story… I too love counterfactuals, as they are a useful exercise at cutting through ideology.

There are a lot of great things that can be done with such a counterfactual, where Europe is silent and Africa rises. Imagine a world where the European Christian church doesn’t dominate history for 1000 years, where Islam doesn’t battle with Christianity for control of Europe, where an Africa unmolested by European domination continues to develop its culture, and whose culture becomes dominant in the world.

Steven Barnes wrote a couple of novels along the lines of “what would happen if the sub-Saharan Africans dominated American history and the Europeans were the conquered lands?” They’re great adventure with strong character development.

I see your point, but I think you’re overlooking Scandinavian mythology, most obviously. Sure, there’s a lot of cartoon Vikings-in-name-only stuff and Thor movie tie-ins that have nothing to do with the actual mythology, but also games like Jotun and The Banner Saga and Year Walk, each of which take mythological inspiration in various degrees of fidelity.

(I’ve heard that The Witcher series incorporates a lot of Polish mythology, but I’m unfamiliar with that so can’t identify it.)

It seems unfair to blame Lord of the Rings specifically, since it actually did draw deeply from European myth. It’s not Tolkien’s fault that he inspired a bunch of shallow pastiches.

Quite a lot - there’s a few Polish people who post on the Witcher subreddit who occasionally go into detail about the various myths it taps into, which is fascinating. The first book of short stories also plays with & subverts a fair few Grimm & Perrault stories as well.

Supported this and would love to see more. I’m a firm believer that life can imitate art.

So… ah, this is about a project, out of Africa, to build a video game, in a country with no pre-existing video games industry, and the majority of comments seem to be about Europe.

Agreed. What a fantastic project and an interesting game!

I’m guessing most of the people who commented about Europe are European, at least to some extent. I’m also (mostly)European, I’ll say this: I would love to play a game that draws on a long tradition that I don’t know anything about! Sounds fun. Crusader Kings II is a grand strategy game set in the Middle Ages, developed by Paradox Development Studio and published by Paradox Interactive as a sequel to Crusader Kings. It was released for Microsoft Windows on February 14, 2012. An OS X version, Paradox Interactive's first in-house development for the operating system, was released on May 24, 2012. A Linux version was also released on January 14, 2013. It has been Paradox's second most successful release to date, after Cities: Skylines, wit...

I had a history teacher who loved pretending to almost cry about how bad the past actually was. (Talking about the 19th century in Europe: “Just imagine, back then, children younger than you had to work in factories 12 hours a day! <sniff>”).

So, without further ado:

What I learnt about African history at school

Well, the first step is admitting you have a problem. Still, that particular lesson was quite unsatisfying.

That would have been Orson Scott Card in Pastwatch: The Redemption of Christopher Columbus. Before he went . . whatever he is now.

Man I loved him in the 80s. Him and Duran Duran.

You could read a book about African history - there are tons of them. But that is the problem with how African history is imagined - always through the eyes of Europeans, whether that’s as the conquering and enlightening hero or the one-dimensional oppressor.

I’m not an Africanist, but one that I’ve recently read and enjoyed, that isn’t actually about Europeans in Africa, was Africa in Stereo: 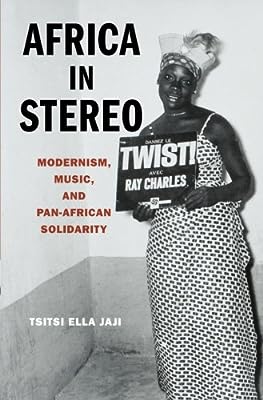 Africa in Stereo analyzes how Africans have engaged with African American music and its representations in the long twentieth century (1890-2011) to offer a new cultural history attesting to pan-Afric ...

The past actually was pretty shitty. For lots of people. Today ain’t too awesome either.

You could read a book about African history - there are tons of them.

Thank you, Captain Obvious. But thanks for the book recommendation.

The past actually was pretty shitty. For lots of people. Today ain’t too awesome either.

True. I was mainly commenting on “shedding fake tears” as a teaching method.

The truth is, the world is shitty on a transhuman scale; no decent human being would wish that level of shittiness on any other human being. But there’s also plenty of good stuff. For thousands of years, even during the most shitty times in the most shitty places, people have mostly preferred living through that shit to not living at all. And, more importantly, in most places, things have been improving. A lot.
Don’t allow your shittiness detector to be maxed out. Constructive optimism is much more enjoyable.

That would have been Orson Scott Card in Pastwatch: The Redemption of Christopher Columbus. Before he went . . whatever he is now.

After I finished reading Speaker for the Dead, I looked up the author. I usually don’t care about what authors do outside of their works, but after reading the fascinatingly even-handed treatment of the interactions between an atheist/nonbeliever (Ender) and a strongly Catholic community, I wanted to know whether the author was religious or not. I honestly couldn’t tell from the book.

This author has indeed fallen deeply.