Ban proposed for ads for drugs and medical gadgets

This is good.
Though why anyone would want to take the drugs based on the tv ad after listening to the side effects disclaimers boggles me.

Ask your doctor if Hydrozurpicone is right for you

(Side effects may include only seeing the color blue, nausea, hunger, an irrational hatred of men named Jeff, sweaty palms, hairy palms, and death by a thousand cuts)

But…but…if they get rid of all those bizarre, inscrutable, cringe-inducing drug ads that go WAY too long for comfort…who will sponsor the local early evening news? I’m especialy fond of the masterpieces that never really communicate whatever it is they are supposed to cure or alleviate. It’s always “ask your doctor about strangephonicsalad” drug… My first questions would be “what the hell is it…and what’s if for?”

Apparently I misinterpret the visual clues too. I’ve seen that Abilify babe…and I thought she was flashing bedroom eyes for someone’s benefit. Turns out she’s just zoned out on pills. Too bad. I might have gotten some of those for…well, you know.

I don’t know about patent abuse… exactly. It’s a little more complicated. It costs a great deal after regulatory safety mandates (which are absolutely necessary, don’t get me wrong) to bring a drug to market. By the time the drug makes it out onto the market, the drug companies usually have only three to six years to recoup costs and to make a profit before their patent expires. Generally, I don’t defend large business conglomerates, but it clarifies why they do a lot of the things they do, including very aggressive marketing. Weirdly, I think extending drug patents might partially alleviate the problem. Or if not extending them universally, granting them an extension after they clear regulatory hurdles for safety. It really depends on whether companies will end up pocketing the difference. I think there’s sufficient diversity in the market that they won’t, but some extra regulations to prevent that might be in order.

Ask your doctor if prescription Nomorads® is right for your case of mild to severe irritation with pharmaceutical commercials!

I think one of the things that Canada does correctly is not allow medical advertisements. It works well. It’s always extremely disconcerting when I go to the USA and am bombarded with those; it’s like, on what POSSIBLE basis could I make the determination that a particular medication is ‘good for me’? Let the doctor make the call. Medication is firmly in the “not my problem” category. Let the insurance companies squabble about how much it costs.

I guess this will free up more money for pharmaceutical companies to bribe doctors directly.

They’d still ingest it, look at “fast food”, people eat it every day.

The scary thing is you’re not that far off from reality which, for me, is really the most annoying thing about the “Side effects may include…” part of drug commercials. It’s impossible to make a joke about them because almost anything you can think of really is a potential side-effect. The line between reality and any conceivable satire is just way too thin.

It’s like trying to make up crazy baskets for an episode of Chopped. “Your ingredients are gummi bears, asphalt, liquid helium, and barracuda nostrils.” And my friend says, “Oh, yeah, I’ve seen that episode.”

All those animated drug ads are weird as hell and give me the creeps. There is something just off putting about them that I can’t put my finger on.

This was exactly my thought. O noble doctors, banning the marketing dollars from flowing anywhere else except themselves. Crony capitalism at its finest.

Instead of supporting a ban, they could just, you know, say no when someone asks for prescription for something not appropriate or effective.

I smell what you are stepping in

(But I literally just had one of those crazy side effects last week, so I granted myself one silly joke :D)

Oh, I’m not in favour of public adverts for medication either.

Just cynical about the whole industry.

What you need are for all medical insurers to die in a fire and be replaced by a single payer healthcare system, non-gamed clinical trials, and an independent body something like NICE to be making funding decisions.

My aunt was a nurse and took a job for a while working for a pharma company. Ostensibly, she was meant to visit doctors, go to conferences etc. and let people know about these new treatment options that were available. But it was just such a sordid experience. She hated it. My dad worked for big pharma for years, told her it would be like that.

I don’t believe that the ROI on drugs is higher in the US than in, say, Germany, where ads for prescription medicaments are not allowed.

But then we wont get to see charming characters like this little guy. I shall call him…Menudo Man.

(As if the walking talking mucus ball wasnt bad enough…) 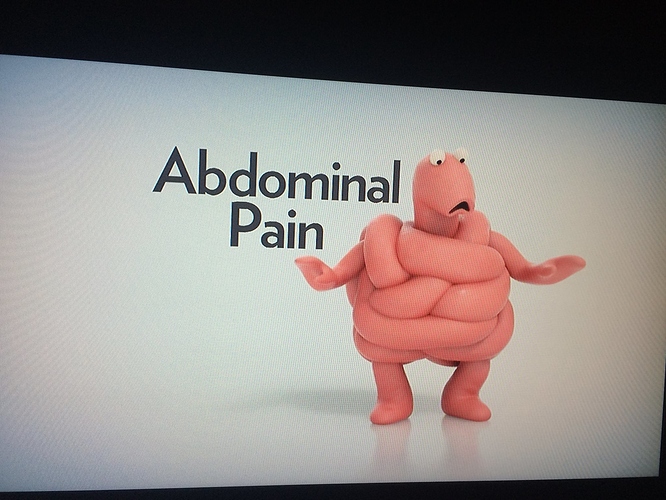 I don’t believe that the ROI on drugs is higher in the US than in, say, Germany, where ads for prescription medicaments are not allowed.

I’m not sure how to parse that statement… because if it didn’t work, why would they do it? Not saying businesses can’t be irrational, but then it’s a non-issue. Are they losing money elsewhere?

Also, I’m not averse to banning prescription drug advertisements, but when people talk about the drug patent lifeline, I think most people don’t understand that it’s a big part of rising drug costs.

The early viagra (et al) ads baffled me also at first. In fact, I think that was the point where I started thinking, why can they even do these ads in the first place? I had thought that that was illegal.

But how else will I ever learn about risky drugs that might add six months of agony to the end of my life, should I somehow get a rare, incurable disease?

You wrote that it is financially useful for the pharma companies to advertise because of the short time span they have a monopoly on a new drug.

I’m not convinced, the pharma profits in the western world are comparable - in markets with and without marketing directed at consumers.