Originally published at: Books I'd sell my soul to read again for the first time. | Boing Boing

The Book of the New Sun is the only thing that I wish I could read again for the first time.

Having read it once before, re-reads don’t inspire nearly so much furiously, curiously addictive confusion.

Toni Morrison/s Song of Solomon comes to mind first as a book where I said at the end, Wow, that was really a good book. So yeah, I’d be glad to be able to read that again for the first time.

I love that the list started with Alice Walker. Her shorter works changed my world, and I wish I could go back and experience them for the first time as an older adult, instead as a young adult forced read them in timespans too short to give the stories justice. I think

Kelly Link- Magic for Beginners
Karen Russell - St. Lucy’s Home for Girls Raised by Wolves and Vampires in the Lemon Grove- Both Link and Russell collections were like watching Twilight Zone episodes, where one can revisit and enjoy, but those early realizations during the reading can never be re-experienced once one knows the twist.
Kazuo Ishiguro - Never Let Me Go or all of them. I have returned to them, but have never recaptured the rapture in the revelations of the stories.
Stephen King - The Shawshank Redemption or so many of his early short stories. Stories that were just fun.

Shirley Jackson - The Lottery, and her other shorts. (There is only one first time to experience The Lottery.
Philip K. Dick - So many of the stories are ambiguous as to what the endings are. Many of his stories are like ambiguous drawings, and I wish I could relive the moment where two outcomes oscillated back and forth in my mind and were both mutually exclusive and simultaneously possible.

These are stories or collections that surprised me on some level, mostly emotionally. I came to reading rather late, due to learning disabilities. I am quite sure this is why short stories and particularly, those with a twist are the one’s that I wish I could reread for the first time. Quite often, it is the skill of the writing or a trick used that I wish I could see for the first time, so I can feel overwhelmed at reading something that I am awe of.

Going to heartily agree on most of the Philip K Dick stories. I’ve reread several of them multiple times, but that first hit when you hit the twist you KNOW is coming is intoxicating.

For me, the top books would be:

Reaper Man, Terry Pratchett. Heck, all Pratchett, for that matter. Great books, but I devoured each of his books the first time I would read a story. Reaper Man though has the most brilliant scene in any of his writing, which only becomes greater after you read it and then read HOW he set it up. Hogfather might be another one that has a really left-field twist for Pratchett.

A Spell for Chamelon, Piers Anthony. Most of his early work, really. It has giant flaws, yes, but the style and theme were original. Xanth up to say the 14th book to re-enjoy, and at least the first 6 Incarnation books. 7th is a bit of a slog and 8th…um…no.

Ringworld, Larry Niven. The entire series is good, but the first one is great. Protector also is a fantastic read after you read the third book.

Enders Game, Orson Scott Card. Once you read it, you can’t help but look for clues earlier on to see if you can figure it out earlier.

The Necronomicon? I mean, the parting with your soul part is already there in the fine print. In invisible script.

Blood of Roses by Tanith Lee
One of the most epically mysterious fantasy novels of all time. Her oeuvre is up and down, but this one shows the peak of her talent. The mystery keeps twisting and turning, and I had absolutely no idea what the truth was through the first half of the book - in the best way. Not a light fantasy, this one is high lit.

Though I think Small Gods is top of the heap for me, and I preferred the incarnations series by Piers Anthony, back when I was into that.

And to add the the list:
Fuck Yes by Rev. Wing Fu Fing (AKA Tom Robbins, or so the rumours say)

I actually heard that rumour about Tom Robbins from someone who claimed to have known him.

The Debt to Pleasure by John Lanchester.

It’s a great re-read, but I know where it’s heading and I’d love to experience the dark unexpected joy at how it unfolds.

There are so many that after the first successful read you do not want to go back.

For one that reads great the first time and very well in repeats, I present Curse of Chalion by Lois McMaster Bujold.

A Suitable Boy is also my desert island book, I’ve read it over and over and was so thrilled when it finally came out as an ebook, since the print in my three volume copy is pretty tiny for me now.

I waited too late to try to read Neuromancer; by the time I got around to it, we were basically living in that cyberpunk dystopia and it was just too depressing for me. Maybe I should try again, though.

Have you read his novel in verse? Very clever! 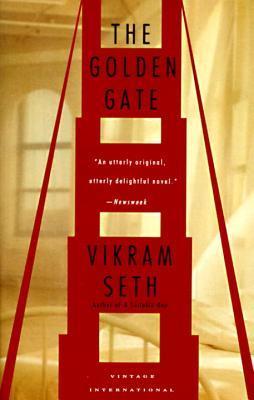 One of the most highly regarded novels of 1986, Vikram …

Never had the guts to tackle Suitable Boy though. Isnt it like, 1400 pages l9ng?