British man shows off cosy off-grid house in the woods

Yeah, I wonder at the people taken in by that fantasy: They’re in a cute little pod in the mountains, beautiful view, but they have no pantry food storage, no alternate heating, no closet of clothes for difficult weather, no place to stretch or walk except outside, a water system that will freeze, and the trail down to the road is deadly until spring.

All the comfort a Japanese tube motel, combined with the disadvantages of a mountain-side shack.

The not-so-far future of the world if the income disparity continues at the present pace.

Cause of death: Cold hard reality; and hypothermia.

I guess it depends how you define “the grid”-- his internet connection is an antenna in a nearby field, not cable. Off-the-grid is a system and lifestyle designed to help people function without the support of remote infrastructure, such as an electrical grid. In electricity, off-grid can be stand-alone power system or mini-grids typically to provide a smaller community with electricity. Off-grid electrification is an approach to access electricity used in countries and areas with little access to electricity, due to scattered or distant population. The term off-the-grid (OTG) can refer to living in a self-s...

Stuck inside that hab capsule, I bet they’d kill each other before the power failed.

That off-grid round-house might not be the shiny tiny perfect future, but someone could stay quite sane in that place.

How about an Unidentified Floating Object?

For when the waters rise.

Does it have a tiny track for doing laps around your houseboat? I’m also imagining just how hard the harbor master is going to laugh when you try to find an appropriate dock for this.

How hard is it to right when it gets flipped over in a storm? Is there an escape hatch on the bottom?

At 1:00… “this house now has everything a normal house would have,” he says, panning across the ubiquitous Bob Marley.

(I’m sayin’ that with love)

How about an Unidentified Floating Object?

Argh! Another unworkable magic design concept that would be a cramped death trap in real life. The specs are a lie; they do not have “40 sq. m” of solar panel. A shape that makes it difficult to take out of the water, transport and store, and a dinky 4 mph motor, probably with paddle boat range. No sign of running lights, nav and radio, or even a place for the pilot to sit. Good gods!

Makes a cosy house in the woods look pretty good no?

How on earth did he get planning permission?

Probably by agreeing to pay the same “rates” as anyone else. Money almost always makes a politician happy.

“You will not be surprised to hear it is extremely unusual to get planning permission for a dwelling in a wood.”

Very interesting to hear how he did it. Three guesses from a cynic. He pulled down (or modified) another little house which is wasteful. He pulled strings at the council which is corrupt. Or he didn’t bother, which means now it’s gone viral they’ll make him return the wood to the way it was before he built his house, or pull it down. British planning is everything that is wrong with British beaurocracy. I really hope he’s bucked it.

Yeah, “submitting a planning permit to the town council” is exactly the sort of thing that people move out into the woods to avoid.

I really hope he’s bucked it.

I wouldn’t bet on it 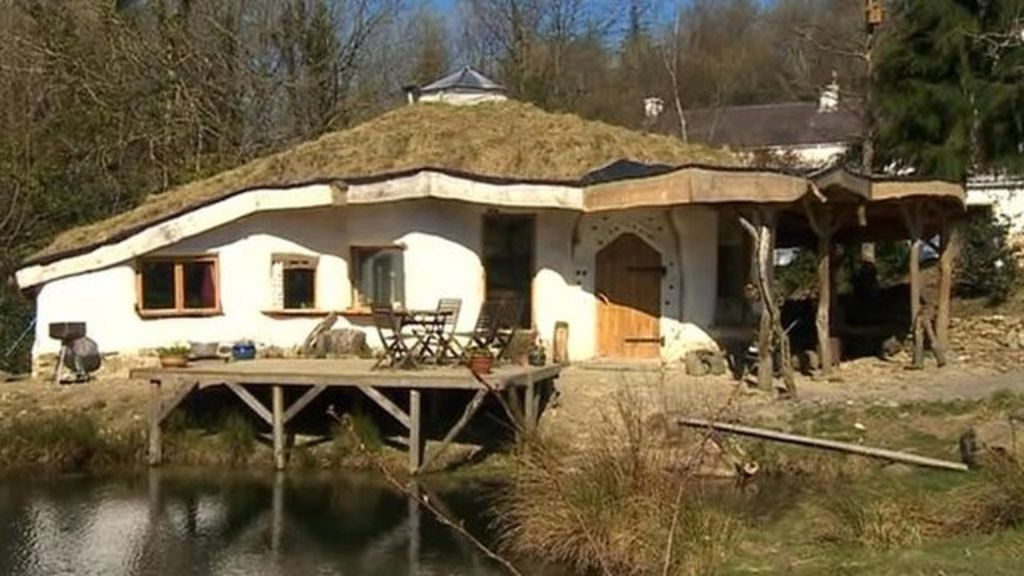 I think the 40m^2 of solar figure comes from that one where the useless and impossible to maintain tiny grassy areas are replaced by solar panels.

Also, I love the audacity of the design where the shower is behind a big piece of glass in the viewing area. That’s so Italian. They didn’t even bother frosting the glass. That shower stall also takes up a substantial amount of the usable internal space on the thing. It appears to have been more important than for example the toilet, storage, cooking, or even sleeping areas.

Maybe the way they work is that you have half a dozen pods each specialized for one thing. There’s a shower pod, a sleeping pod, a kids playroom pod, etc…? Presumably this is intended to appeal to avid swimmers who won’t mind having to jump in the water to go between rooms of the house?

It appears to have been more important than for example the toilet, storage, cooking, or even sleeping areas.

And the fresh water tank, heater and a decent battery bank (more than that little thing by the motor). Hopefully they have a bilge pump to drain the lower section.

When I was a kid we used to call those caravans. They used to have wheels so you could move them without a helicopter too.