Are you sure… because…

You seem to be indicating that there is no real reason for regulation here. That it’s “just because”…

Here in Colorado, we survived an attempt by newly minted US House Rep Yadira Caraveo to limit THC content (For the Children!)

Yet more dismissal of regulatory efforts. Although you seem correct that she’s using it as a pretext for denying some access, but that seems a classist issue.

Prohibitionists wear all kinds of hats and scrubs.

again, seemingly to deny a need for general regulation.

FYI, here is an article about the house rep you mentioned, and the overall issue of THC content: 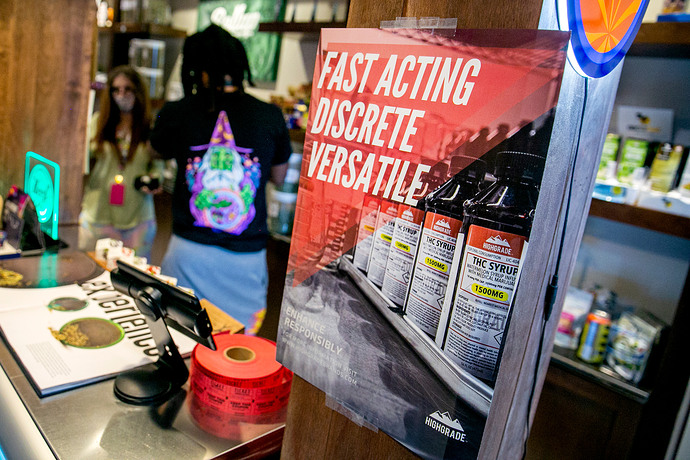 Concerns Over Teens And High Potency Marijuana Have No Easy Answers At...

An effort to set a cap on the potency of marijuana products looks like a no-go with lawmakers this year, but other measures are still on the table.

I’m from Kansas. Beer here is locked at 3.2% unless you go to a liquor store, IIRC. (I don’t drink very often.)

While I am against limits, per se, I am for proper labeling. Accurate THC labeling like we do for alcohol content.

While I am against limits

IIRC Everclear is damn near that. I wouldn’t want to drink even a shot of it, but you can use those high volume ones for mixing too.

You grok what I’m saying. Agree 100%
MO just legalized marijuana. Arkansas declined to do so.
Joplin is about to become even more a hub for “tourists” from KS, AR, and OK.

Sure, but it’s also regulated. This whole idea that government regulation is always bad ignores the fact that prior to forms of regulation around shit we put into our bodies, people died in much larger numbers from ingesting products that had no form of regulation. You can’t trust corporations seeking to make a profit, who will cut corners for whatever reason.

I’m from Kansas. Beer here is locked at 3.2% unless you go to a liquor store, IIRC. (I don’t drink very often.)

That went away a couple of years ago. Now any KS retailer with a permit can sell whatever they want… In the KC and surrounding areas anyway, I don’t know about the rural areas

OH I agree. Especially when it comes to things we put in our bodies or are exposed to. If it is something that has long term effects but doesn’t out right kill you, and it saves a buck, someone will go that route.

The shit we put into food at the turn of the century before the FDA is terrifying.

I do, but I wouldn’t call placing limits prohibition, per se.

That went away a couple of years ago. Now any KS retailer with a permit can sell whatever they want… In the KC and surrounding areas anyway, I don’t know about the rural areas

That’s good to know. I just moved back to Kansas earlier this year. I remember when I first moved to Missouri to be shocked you could get liquor at the grocery story (but IIRC at one point you had to wait till after noon on Sundays.)

But I don’t really drink, so haven’t bought any beer since then.

Alfred Korzbyski was reported to have stated, “I said what I said. I did not say what I did not say.”
You seem to be addressing the latter.

I actually agree with much of your stance on regulation vs prohibition.

I do, but I wouldn’t call placing limits prohibition, per se.

I don’t equate them unless limits are abolute. Much of the support for Caraveo’s bill came from prohibitionists who’ve been seeking to undermine the voters who approved medical and legal weed in CO. The long game is to limit access, not potency, but in this case, they only hurt patients on disability who cannot afford to pay for two MD evals (insurance doesn’t cover) or who now have to buy much smaller quantities. That increases suffering, especially for those who live rurally or in areas with no dispensaries and have to drive long distances more often as a result of this bill. I’ll equate that to prohibition for affected patients, but generally speaking limits do not equal prohibition.

As a terpenthusiast, for me, lower-potency cannabis is a good thing because it’s easier to appreciate a plant’s aroma and flavour when you don’t get zombified after two hits.

It’s nice to have less than Snoop Dog

You mean, “Dad” weed, as in, weed my dad would like me to have smoked, instead of weed that me as a dad now never smoked.

wow, it’s like your cannabinoid receptors just got straight up blocked and say “No thank you! We’re good!”

It’s not like everyone wants to get falling down drunk on whisky, some folks like just having a beer.

I’d take that metaphor further; when I go to the pub I’ll usually pick a ‘session beer’, ie one with around 3.5-4% ABV, rather than (eg) one of the 7%+ IPAs that are out there. That way I can enjoy several ppints without getting too drunk.
In the same way, I have asked a dealer for “session weed”, that I could smoke a few joints of without getting completely blitzed.
Not that weed is likely to be legal around here any time soon, but I could imagine a taxation system that treated ‘strong’ weed like spirits, and ‘session weed’ like beer.
Although as others have pointed out, with booze you only have to keep track of the concentration of a single chemical (ethanol) to gauge it’s potency, weed is a bit more complicated.

I’d take that metaphor further; when I go to the pub I’ll usually pick a ‘session beer’, ie one with around 3.5-4% ABV, rather than (eg) one of the 7%+ IPAs that are out there. That way I can enjoy several ppints without getting too drunk.

I do the same. I increasingly seek out lower alcohol beer when I’m out. What’s great, is that there seems to be a light lager trend in the craft beer scene right now. I love it because anything over 5% absolutely kicks my ass (and I’m a big fan of lagers) and I don’t have the patience for hangovers I used to.

On topic, the idea of a less potent pot is smart for folks who want to puff a little, but not get blasted. The more options there are like this (including things like alcohol-free piquettes and other tasty non-alcohol drinks) the better.