A classic case of “I disapprove of what you say, but I will defend to the death your right to say it.”

Certainly Charlie Hebdo have the right to say what they want, and some of their work was pointed satire, but much of it was sophomoric racist depictions of Muhammed, just because they could.

It’s one of those situations where it’s difficult to make this distinction without coming off as a terrorism apologist, so good job Sacco for trying.

I’ve seen lots of accusations of racism aimed at Charlie Hebdo’s cartoonists, but from people who seem completely ignorant of the context the images were created in. Sure, some of them use stereotyped imagery, but the meaning behind these images is the mocking of actual racists and bigots (FN, Dieudonné, and Islamic Extremeists for example). The re-use of racist imagery to mock racists is hardly a new tacitc in satire.

I’d say that quite easily qualifies for the mockery of a satirical magazine, just as if someone condoned killing someone for not believing in the Easter Bunny.

The crashing pompousity of the self-important radical extremists of any religion rightly deserves lampooning.

No excuses can be made for such cretins.

No, we’re talking about extremists who use that as an excuse for murdering people.

They’re not even following their own rules correctly, the hadith in question (no mention in the Quran) only prevent Muslims from making representations of Muhammad, and even if they were to do so, the punishment was never death.

[quote=“joehodgson, post:4, topic:49614”]
We are talking about a religion which condones killing someone for daring to mock an imaginary man-who-lives-in-the-sky.
[/quote]

Where do the people responsible for this fit in? Because they are the government.

Saudi Arabia sentenced Raif Badawi for creating an online forum for public debate about the dominance of religion over public life in the kingdom.

They really were pathetic cartoons, the ones depicting Muhammed. They barely register as satire at all.

Cowards? Most Anglo news outlets didn’t spread that stuff for the simple reason that the images would not have met the standards of most news outlets. It could be called prudish, but not cowardice, to refuse to broadcast or print images depicting asshole, taint, balls & cock of Muhammed, bent over in a vulnerable position that exposes all that at once.

Frankly I don’t want to see that shit & that doesn’t mean I support killing the artists either.

If there is a line between satire & outright, unimaginative insults then it varies from one person to the next, but the artists at Charlie Hebdo sidled right up and straddled it, no matter who you are.

Still not an apologist or victim blaming. Just laying it out there since this incident will doubtless be milked by the security state to the utmost, which will negatively impact my life & my children’s too. Fuck all that.

That narrows it down.

“There are no great religions; they’re all stupid and dangerous”

Also, all of Joe Sacco’s work is awesome. I especially love his work on the middle east and the Balkans. If nothing else, everyone should read Footnotes in Gaza: 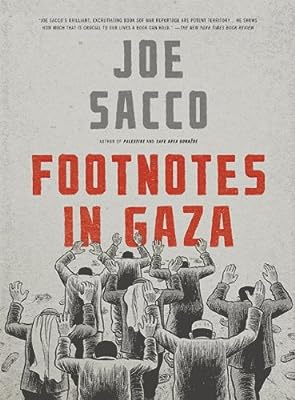 Footnotes in Gaza: A Graphic Novel

"Sacco brings the conflict down to the most human level, allowing us to imagine our way inside it, to make the desperation he discovers, in some small way, our own."â��Los Angeles Times Rafah, a town ...

One point about satire is its multi-faceted impact.

If you found yourself sniggering sneakily at a supposedly racist cartoon, then moved on to read about the National Front’s advances in electoral spheres, yet thought yourself an obliging neutral, you discovered a problem, an inner conflict.

You never had to face that if you’d never noted the satirical cartoon.

Listen to interviews with the editors of Hebdo on youtube (they’ve stopped giving live ones). The level of intelligence, awareness, feel for the people - those are astonishing, and defile any idea that their supposed racism was sophomoric.

Oh that’s awfully under-educated of you.

Much as many Germans didn’t shout back at the Nazis, many muslims do not fight the system because they are perfectly, lucidly aware of the awful potential consequences if they do.

Malaysia is a muslim country, and the majority position is one of anxiety, fear and uncertainty in the face of a prejudicial authority.

Even simpler - a couple of down and out clowns with AK47s who lean on a supposed matrix of rules; but only because psychopathic murder is generally deemed unacceptable.

Someone said it was wrong? Nope.

When we’re done yelling about The Muslims, the author provokes an interesting set of questions. Why is Islam producing more terrorists these days than most other religions? Why now, and not 1930? I sure don’t know enough to even speculate, but I’ll bet there are some very smart Muslims who have some idea of why, and what to do. Why don’t we ask them - or would that be fraternizing with the enemy?

And what’s wrong with this magazine?

It has buyers and subscribers who clearly enjoy seeing a bit of outright and unimaginative insult.

Again, no one’s saying they don’t have the right to publish it, and no one condones the terrorists in any way, but we’re still allowed to call it sophomoric and racist if that’s what it is. And that’s what this discussion is all about.