From the New Yorker: Trigger Warnings and the novelists mind

During a graduate-school lecture on “Lolita,” my professor stood up in front of a crowded classroom and said something I have never been able to shake: “When you read ‘Lolita,’ keep in mind that what you’re reading about is the systematic rape of a young girl.”

I had read “Lolita” in high school and then again in college, when it became my personal literary liquor store—whenever I got stuck in a scene, or whenever my prose felt flat or typical, I’d open “Lolita” to a random page and steal something. My professor’s pronouncement felt too didactic, too political, and, although I tried to put it out of my mind and enjoy “Lolita” ’s cunning, surprising games with language, I could no longer pick up the book without feeling the weight of his judgment. The professor wasn’t wrong to point out the obvious about Humbert and Dolores Haze, and I don’t believe—at least not completely—that literature should only be examined as an object unto itself, detached from time and history, but I haven’t read “Lolita” since.

A lot of defenders have compared trigger warnings to the justifications the MPAA uses to relegate certain movies to the less financially rewarding marketing segments, a part of of the culture of media consumption, but I have always regarded them as reductionist, and perhaps an opportunity for a reviewer’s wit to shine.

“I Still Know What You Did Last Summer” assembles the building blocks of idiot-proof slasher movies: Stings, Snicker-Snacks, false alarms and point-of-view baits-and-switches. We’ll get back to those. The movie’s R rating mentions “intense terror violence and gore,” but only its publicity team could consider it intense or terrifying. Gore it has. (ebert, 1998)

(edited to blockquote the second paragraph of quoted material) 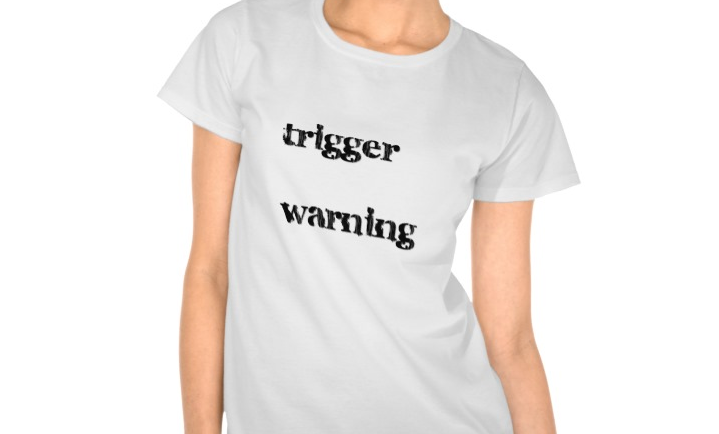 What I Learned About 'Trigger Warnings' From Teaching College Students

I have a dream of walking into a classroom with a shirt that says “Trigger Warning: I’m the Prof” across...

Today I learned that people use trigger warnings in real life.

I’ve so far been less than impressed by the coverage of this ‘trigger warnings and academia zOMG!’ stuff.

On the one hand, every article has the requisite “find the demand for trigger warnings, from any individual or organization, on any campus in the US, with any degree of hope for being taken seriously, that wavers closest to Poe’s Law, then snark at it” section, then the ones that are sympathetic or ‘balanced’ have the “recount the most arguably ill-advised instance of somebody rolling RapeCore War Violence Flashbacks: The Movie to a 500 freshman lecture hall before even handing out the syllabus” section; but so far none of them seem to have asked one fairly basic question:

On the internet, ‘trigger warnings’ (along with a lot of more banal NSFW, ‘PDF warning’, ‘Source (Paywalled)’, and all sorts of other informative snippets) are provided largely because links are virtually blind. Even a cautious user, with a modern browser that displays the URL on hover, and no URL-shortener nonsense, can basically only see the URL before they click it. It could be damn near anything, and often is. Are these necessary, or even logical, in environments where substantially more context and pre-contact information is provided?

I only have my experience to go on; but dredging up the syllabus, (worst case, last year’s), was usually pretty trivial and there was some penalty-free add/drop window that everyone used to get their schedules in a row, decide what class they would rather avoid than fail, and so on. Is there any real information imbalance, that the warnings would address, analogous to the one that internet trigger warnings are used for?

As far as I’m concerned, “trigger warning” is just an update to MPAA-like content warnings, only more oriented toward actual desires of viewers/students/participants. Eventually, there will be a broad consensus about two or three different schemes for how to do it. Then we can tell the MPAA to trundle their sheltered, pearl-clutching “test viewers” off to the rest home, and we’ll reach a new milestone in de-theocratization.

The problem is real, otherwise these solutions wouldn’t keep getting invented. I think the pompously long titles and sub-titles and alternate titles for early novels were a way of providing this kind of warning about content, and even now the NSFW tag is considered to be absolutely expected for most forums which don’t immediately moderate “questionable” content.

As far as I’m concerned, “trigger warning” is just an update to MPAA-like content warnings, only more oriented toward actual desires of viewers/students/participants.

This topic was automatically closed after 1000 days. New replies are no longer allowed.