You know, if we are going to have a death penalty (and I don’t think we should - reason 2 in the post completely negates the need to even discuss reason 1), then we should apply it like China claims to to businesses. If you were the CEO of a company and you knowingly did something that killed people (putting Melamine in baby formula is an actual example that springs to mind), then you get treated just as if you had put it in and fed it to the victims yourself. I can think of a lot of financial and environmental corporate crimes that probably meet this test in the US. Today we don’t frequently really even penalize the corporation for these.

Now, since your idea doesn’t take a human life I am completely in favor of killing corporations for just about any wrong doing, down to parking tickets. Though really, what we need is better contraceptives to prevent them ever being conceived in the first place.

The death penalty and the war on drugs sometimes makes me feel better about myself whenever I find myself on the fringes of American society on other issues. About 75% of you are kinda stupid and definitely draconian.

I was a dummy who supported the death penalty up until my mid-twenties. I even freaked out about it once and got all riled up because someone was trying to reason with me about it.

Over time I began to learn it was too expensive. Then those awesome law students went in and vindicated some people that were on death row and I learned it killed innocent people.

And then one day I learned it was wrong because I realized that it doesn’t even prevent crime. And, finally, I grew up and realized it’s simply an animalistic, debasing, disgusting way for humanity not to evolve.

So I stopped being a dense asshole, put aside my pride, put aside senseless desires of bloodthirsty vengeance and evolved into a better human being.

I’m embarrassed that I ever supported it.

I wonder how they worded the question. In theory, I have no problem with executing murderers and I don’t think it makes me bloodthirsty. In practice, the justice system is so flawed, so racist, so classist that the death penalty’s responsible and consistent implementation is impossible.

I’m in the crowd who’s gone from favoring the death penalty to wanting it abolished because of the frequent appalling mistakes (and the vast economic/social/racial biases). Age and maturity helped change my view. I also realized that if you are really wanting to punish someone, life in prison (or longer) seems far worse than death.

However, if I have to live in a country with the death penalty, a silver lining will be Dzhokhar Tsarnaev’s inevitable execution.

I just want prisons to keep people out of society while they can’t function in it, and work to turn them into people who can function in society when they get out.

And I don’t want people profiting from it.

I don’t believe that the death penalty or stiff sentencing works as a deterrent and I have no interest in vengeance. 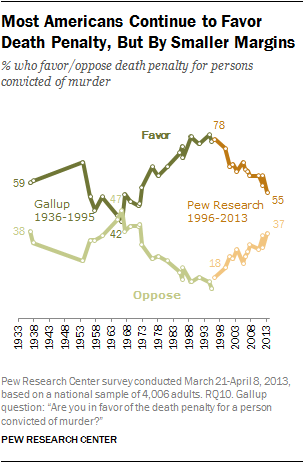 I will change my views on the death penalty as soon as the justice system figures out a way to consistently dispense actual justice, instead of the flawed facsimile that we now have. When they can eliminate the disadvantages enjoyed by the poor, when they can eliminate the prosecutorial discretion that is driven by political concerns, when they can honestly say that everyone is treated equally in the system, then maybe we can talk about a death penalty for truly heinous crimes.

Until then, not so much.

That would make him a martyr, life in prison is the better option.

It is interesting how closely that chart parallels the rise and fall in the per capita murder rate in the United States.

I was really in favor of the death penalty when I was younger. My parents were, and I never thought about it. What changed my mind was a class on ethical philosophy. My instructor took various topics like death penalty, animal testing, abortion, etc, and made us read both sides most compelling literature. He never took a side, but instead let us decide for ourselves.

It was a cool class.

Not only is the death penalty ineffective in reducing murder rates, but it also is certain to execute an innocent person eventually, for the simple reason that the justice system is not perfect, and will always convict a small number of innocent people as part of its functioning. The supporters of the death penalty, therefore, support a policy which claims to protect innocent people from murder (but doesn’t) while ultimately murdering innocent people. FAIL.

In 1996, 16-year-old Shareef Cousin was sentenced to death in Louisiana for murdering a man in a holdup. At the time the murder occurred, Cousin was playing in a midnight basketball league game, and there were not only multiple witnesses to that, but there was even a videotape of Cousin playing that also showed a wall clock indicating the time.

Cousins was eventually freed from death row, but a system that would allow that to happen is not one that anyone should have any faith in at all to administer justice.

Tsarnaev placed a bomb at the feet of a eight-year old boy and walked away. I’m not concerned with the opinions of anyone who sees that as a part of their dogma. Although, life in prison may be better because he’d suffer more…

In any case, the debate is arbitrary. The outcome of the trial and sentencing is a foregone conclusion. I may as well be content with what it is: the only sort of execution that I am, in theory, OK with.

Unfortunately, this is just the type of case that stands in the way of abolishing the death penalty. People talk about using it in only the “most heinous of crimes.” The next thing you know, it’s being used in any old murder case where a DA’s office sees political gain to be had.

A start in the right direction would be to restrict the death penalty to federal cases. The feds have a better track record of convicting the right person (I am unaware of any federal exoneration cases). Also, since the reinstatement in 1988 only three federal executions have actually taken place out of about 70 prisoners on death row.

I’m not losing sleep over Tim McVeigh’s execution but he and Dzhokhar are not in the same boat as a murderer in a drug deal gone bad or a murderer (or not?) in a bank robbery that went sideways.

“But it is because of changing beliefs about the morality of killing people, or because there are simply too many appalling mistakes?”

Perhaps “too many appalling mistakes” is changing the beliefs about the morality of killing people?

My guess would be that it’s tied to the supreme court decision in 1972 that basically suspended the death penalty for a while. That started up the hard-on-crime noise-machine and led to a great deal of pro-death penalty agitating. Because of the way the chart is done it’s impossible to tell exactly where between 1968 & 1973 the rise occurred, but my guess is that most of it is in 1972.

Edited to add: Oh, and there might be a Sirhan Sirhan related bump in the polls in 68 that would probably raise the pro-side on both sides of the aisle a bit.

In theory what good do you feel it does?