Did US kill al Qaeda leader with "flying Ginsu" drone?

As I said, I’m no terrorism expert. However, there’s also this.

The Republicans are all about terrorism. 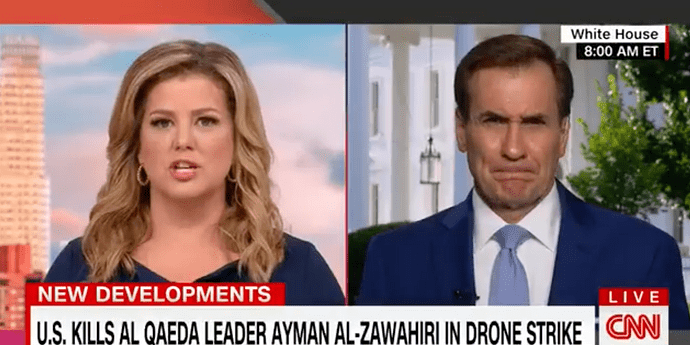 They’re just never happy, are they?

What about the news stories that show a video of smoke rising from the area (but without claiming it was coming precisely from the location of the strike)? Was that just a smokescreen?

It kind of scares me to think about what the last few seconds of video from the onboard camera must look like.

To be honest, I’m not sure what I’m supposed to take from this.

That the possibility of an increased probability in premeditated or off-the-cuff attacks from anyone in retaliation for al-Zawahiri’s death means that al-Qaeda is equally capable now of sending operatives to the United States and coordinating and financing a multi-month plan from another country? Because a number of experts say AQ is not.

It’s a travel advisory. It’s not about anything happening in the US.

Domestic terrorism from white nationalists born here is a far greater threat on US soil than foreign born terrorists of any ideology right now and it’s likely to remain that way. Wasn’t my point anyway.