Dreamland: Adventures in the Strange Science of Sleep

Carlin (of course) nailed it:

“People say, ‘I’m going to sleep now,’ as if it were nothing. But it’s really a bizarre activity. ‘For the next several hours, while the sun is gone, I’m going to become unconscious, temporarily losing command over everything I know and understand. When the sun returns, I will resume my life.’

If you didn’t know what sleep was, and you had only seen it in a science fiction movie, you would think it was weird and tell all your friends about the movie you’d seen.

They had these people, you know? And they would walk around all day and be OK? And then, once a day, usually after dark, they would lie down on these special platforms and become unconscious. They would stop functioning almost completely, except deep in their minds they would have adventures and experiences that were completely impossible in real life. As they lay there, completely vulnerable to their enemies, their only movements were to occasionally shift from one position to another; or, if one of the ‘mind adventures’ got too real, they would sit up and scream and be glad they weren’t unconscious anymore. Then they would drink a lot of coffee.’

So, next time you see someone sleeping, make believe you’re in a science fiction movie. And whisper, 'The creature is regenerating itself.”

My main abiding interest in sleep is the subject of dreams… though well acquainted with insomnia as well as sleeping for really long times.

I see in modern society a lot of work and play is virtue, but rest is vice. Typically where I think this gets bad is when people do not give themselves time to think.

To a degree we think all the time, but if also engaging in constant input, that thinking is very limited.

Typo in the first sentence of the synopsis. “reivew” Should be “review”.

Does the book cover lucid dreaming at all? By FAR the weirdest aspect of sleeping and dreaming, which in my opinion forces one to be utter existentialist about the whole thing. Just bought the book A Field Guide to Lucid Dreaming, it’s pretty decent. And yes, I do have lucid dreams periodically and have been since childhood. It doesn’t get weirder than lucid dreaming.

Would you mind describing what lucid dreaming is like for you? (I could Google it of course, but thought you might not mind since you sang its praises.)

In short, lucid dreaming means that you become aware of the fact that you are dreaming while you are dreaming. It can manifest in a few ways, to various degrees of lucidity. At the most “extreme,” the only way I can explain it is you suddenly being like “holy fucking shit, I’m in a dream, and all of this is either being generated by my mind on the fly, or I’m literally in another dimension!” And when you’re in that state – well, the idea that it’s all being generated on the fly by your brain seems a little tough to believe. You can feel objects, hear sounds, communicate with “others” (?!), fly, morph the dream reality around you, have sex with aliens, etc. It is BIZARRE and totally cool, and it can be learned.

Apparently this sort of thing is not common.

I find that if I am too tired, I cannot control my dreams as easily. The best lucid dreaming has come when I was unemployed and able to sleep way too long for several days on end. There is a point where you really shouldn’t be sleeping anymore, and your brain knows it, and things get really fucking weird.

I guess the other way to put it is, it’s like being on the Star Treck Holodeck while mega-dosing on acid. It’s fully-realized virtual reality. Often it seems MORE vivid than waking life.

Interestingly, it often works the opposite way for me. I’m a chronic hardcore insomniac, and my lucid dreams often come about when I’m delirious in the morning after not getting much sleep at all, while drifting in and out of sleep.

Also, if I remember correctly, it was when I was taking Chantix to quit smoking, while also taking micro-doses of Seroquel as a sleep aid, that I had some of the most insane lucid and quasi-OOB experiences regularly. Chantix wrecks havoc on dreams (some downright freaky shit ensues), and somehow mixed with the Seroquel, shit was just nutty. 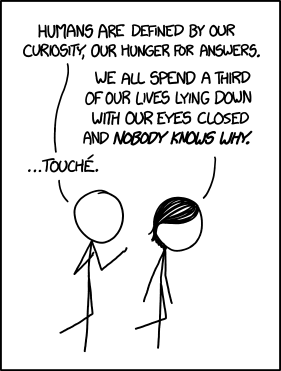 Stanford sleep researcher William Dement said that after 50 years of studying sleep, the only really solid explanation he knows for why we do it is 'because we get sleepy'.

What gets me is that, with a tiny fraction of the brain activity compared to waking perception, I can build, maintain and modify, at will, an entire solar system of coherent perceptions; places, objects, story-lines and characters with whom I can have full conversations (usually about the nature of dream reality and our existence within it).

I’ve even managed to read a few pages of some books, which quickly break down into meaningless letter-forms and diagrams. It’s the inconsistencies of logic that impress me the most. You can’t dream the perception properly but you can notice that it isn’t behaving as it should. Or sometimes the reverse. I can build a puzzle that I can’t solve in the dream but upon waking, immediately think ‘Ah! Of course,’ go back to sleep and implement the solution. Integrating into the dream some idea that I only seemed to have the logical faculties to realise whilst awake.

This weekend I dreamt that a girl I was sitting with read a poem to me called “On White Pillars of Amber”, about us playing in a giant palace. After I awoke, I searched for the title, and found that in India there is indeed a palace called Amber (aka Amer, aka Amba) , which is known for its many gorgeous courtyards and pavilions built of sandstone and marble pillars. Either I had this information very deeply buried, or else it’s just an interesting coincidence. It was a pleasant dream, in any case!