Driver installs train horn in his Miata, possibly saving his life from an idiot driver

I’ve driven a Miata for around 15 years and know you have to drive that thing like it’s totally invisible. Defensive driving is the key to staying alive. A train horn is entertaining but a bit excessive.

train horn, or maybe just not be cruising along in his blind spot.

Everyone is saying ‘blind spot’, so you know you have them. TURN YOUR HEAD and check the blind spot when changing lanes.

The idiot driver is the driver of the Miata. Watch the video. As soon as the SUV turns on his right turn signal the Miata accelerates to cut him off and then blasts him with the horn. He created the dangerous situation he’s complaining about. He should be condemned for reckless driving rather than being praised.

Is it really fair to require large-vehicle drivers to check below their field of view?

It’s in a different country, but the recent changes to the British Highway code say that they should be more aware, on the grounds that big vehicles do more damage than smaller vehicles. There are limits to this though, and smaller vehicles/pedestrians/horses are still at fault if they cause a crash, despite what the anti-change complainers claim.

Defensive driving is an important part of learning to operate a motor vehicle. In this video, we can see a driver who has zero ability to drive defensively and who decides to aggressively hold their lane despite a bigger car signaling their intention to move into it AND a driver who very likely cannot see their little vehicle in the blind spot. Yes, cars have blind spots, they all do. It would have cost the Miata driver nothing to simply let off the gas just a touch and let them in, allowing for them to safely change lanes. But no, gotta have that big ass horn to loudly proclaim their right to hold their line.

Sorry, but I just don’t find this funny or enlightening. I see too many videos where folks drive super aggressively and block others as if it is their right to own a lane and they’ll be damned if anyone else is going to cut them off. Resulting, of course, in accidents that could have been avoided. The point of driving is to get where you’re going safely, and giving up a tiny ounce of your ego to do that is small price to pay for avoiding a crash which, whether or not you’re at fault, is going to ruin your day.

I actually watched twice, because I saw the SUV driver brake twice. But the turn signal wasn’t used until one second after the SUV driver had already started the manoeuvre. The SUV driver was also trying to merge in too close behind the car the Miata driver was maintaining braking distance from in street traffic.

So I am not going to ding the Miata driver for being in the blind spot because it’s impossible to not be in that spot on street traffic (as opposed to road traffic). The SUV driver should have signalled the intention, then looked, then started the lange change.

think that may be his MO. Hang out in the blind spot and wait for the other driver to attempt a lane change. Blast them with the train horn. Post on social media. Repeat

Yeah, if someone takes the trouble to install a train horn, they’re not planning to enjoy it privately on deserted country roads.

And OK, the horn thing is funny up to a point. But the rule holds that, in most internet dashcam videos, everyone’s the bad guy. Cars are murder weapons – if they’re being operated in any way that isn’t boring, the driver is in the wrong.

I actually watched twice, because I saw the SUV driver brake twice. But the turn signal wasn’t used until one second after the SUV driver had already started the manoeuvre

Aha, I misread the brake light as a turn signal on first watch, since the left brake light is apparently out.

Here in Michigan when you use you’re turn signal it signals drivers around you to speed up and block your lane change.

Happens all the time in my regular vehicle but when driving the RV cars will intentionally block me from changing lanes.

You know who does let me over? Other semi trucks.

It looks like it sped up and slowed down trying to get in front of or behind that Miata.

Even the most defensive driver of a small car will eventually, through no fault of their own, find themselves in another car’s blind spot. So yes, drivers of every type of vehicle need to be trained to look out for any other type of vehicle.

The video is rather garbage because he could have just moved over and slowed while tooting his horn. That assumes he was being proactive and paying attention. Sure he isn’t at fault for getting hit or the SUV coming over on top of him, but as someone who has had that same scenario happen to multiple times I’ve come to anticipate such things. It would be interesting to see how current production cars with blind spot monitors handle a car the size of a Miata (or a motorcycle).

That said, the Miata driver was passing on the right, which is a no-no, and bears at least some responsibility if this had resulted in an accident.

Unless there is a longer video he didn’t pass anyone. To me this looks like a non-divided multi-lane road, which means traffic could turn right or left across traffic. This would mean either lane could slow and you would get different flows for each lane. In my opinion if the left lane slows and the right lane continues it really isn’t “passing”. If someone jumps out of the left lane to get into the faster right lane traffic that could be dangerous (same as jumping right to left). I don’t see that he did anything wrong other than not being proactive enough.

No one’s forcing them to buy or drive a vehicle larger than they can handle.

But the motor industry is trying hard, you’ve got to give them that.

Everyone is saying ‘blind spot’, so you know you have them. TURN YOUR HEAD and check the blind spot when changing lanes.

Or get a car with BLIS

The SUV driver should have signalled the intention, then looked, then started the lange change.

As per the British Highway Code: Mirror, Signal, Manoeuvre

Comments in the reddit topic suggests the guy does this all the time and posts the videos.

Here is his set up, watch the end where he scares birds and people with the horn. He may not be a good guy with a horn. 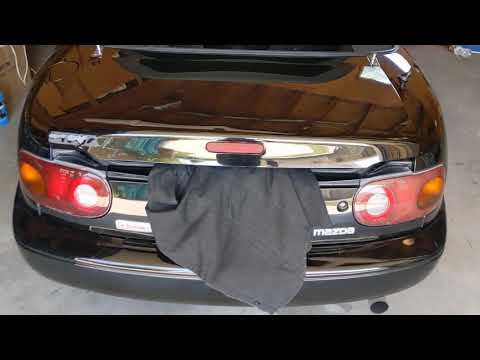 This whole thread makes me glad to live in a country where I can go anywhere without driving.

A small and very immature part of me wants a car horn that sounds like a very loud fart.

I’ve driven a Miata for 22 years and it’s been a recurring fantasy to replace my horn with a train horn.

Having said that, the Miata driver does seem to be creating a need for the horn in this situation. I drive very defensively, because even with a screaming yellow car I’m invisible to 70% of the drivers on the road.

Any 7-12 year-old passengers, however, are waving and yelling out the window about how cool my car is.

To me this looks like a non-divided multi-lane road, which means traffic could turn right or left across traffic. This would mean either lane could slow and you would get different flows for each lane.

That is what I feel is important. The Miata driver is maintaining distance to the car before him, which is why they are drifting in and out of the SUV’s blind spot. Too close and you risk an accident when the lead brakes, too far and people will jump in the hole. It’s not how you’re supposed to drive, but it is how so many people drive that you’re forced to follow suit after a while.

In the end, the horn was a cute gimmick, and no one was injured.

The nature of my job involves me driving often thirty or forty cars a day, moving them in and out of fairly tight parking spaces, and even before that I was driving a wide range of vehicles often several hundred miles at a time, covering north of 100,000 miles over two years, so I’m very familiar with how car mirrors can be adjusted. I can’t begin to tell you how many cars seem to have their door mirrors adjusted so that the drivers can defend themselves from attacks from the air from behind! It’s perfectly possible to set the mirrors on even big SUV’s, vans and trucks so that smaller vehicles can be clearly seen; although, to be fair, many do have huge blind spots where a vehicle approaching faster from behind can’t be seen at all, just at the point you’re indicating and starting to pull out to pass another vehicle - it’s happened to me, I checked my interior mirror, then my door mirror, then started to pull out, just as a van started to come alongside me! A quick blast of his horn had me pulling back in sharpish, plus a bit of an adrenaline rush. I hadn’t seen the van at all, despite it being about the same size as the car I was in, and painted white, and on a bright sunny day, too.
I’d bet that the SUV driver would have probably failed to see a semi alongside let alone a Miata MX-5.

As per the British Highway Code: Mirror, Signal, Manoeuvre