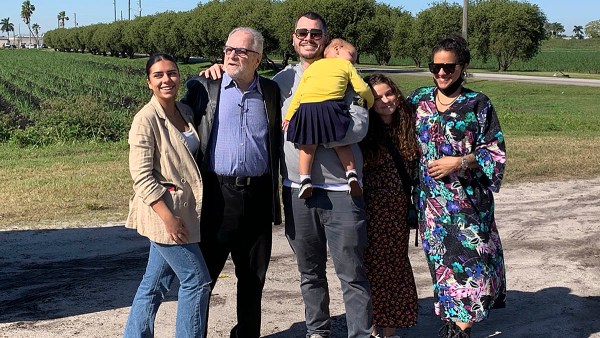 Richard DeLisi is a free man after serving 31 years of a 90-year sentence for selling marijuana.

Yeah, it’s difficult to think of a less dangerous “illegal” drug than THC. Hopefully more and more US states will get on board legalizing THC – and not just get on board, but release everyone who is currently serving a sentence based on prior THC “crimes”.

I’m encouraged that even Mississippi, perhaps the most backward of US states, is getting it right.

Politicians didn’t want it. Leaders in medicine, law enforcement and religion warned against it. Conservative talk radio railed against it. The Legislature, after years of inaction, offered an alternative.

https://www.lastprisonerproject.org/ is a great cause. Thanks for bringing it to our attention. Sending a donation their way right now.

From what I can tell, it’s less dangerous than caffeine - or lack thereof - in some people.

Yeah, it’s difficult to think of a less dangerous “illegal” drug than THC.

From what I can tell, it’s less dangerous than caffeine - or lack thereof - in some people.

Here’s a neat summary of the ranked danger, which draws on the Nutt et al paper in the Lancet from 2010.

How scientists rank drugs from most to least dangerous — and why the rankings...

A tale of difficult scientific policymaking.

I enjoy drug danger graphs like this, though the “harm to others” part is a little squishy. No argument whatsoever on alcohol, heroin, opioids (in general), and meth being at the tip-top. Buprenorphine being so very low danger that it’s near psilocybin is a bit of a surprise to me.

Also does anyone know what “butane” is? Is that like… the fuel… butane?

I guess the only one I’d seriously disagree with the ranking on here is GHB.

Also does anyone know what “butane” is? Is that like… the fuel… butane?

I guess the only one I’d seriously disagree with the ranking on here is GHB.

I have friends who’ve used small amounts regularly for years, from when it was still legal to buy (in Australia) as a bodybuilding post-workout “relax” and it always seemed safe enough. I’m assuming the harm is in the dose and the risks of mixing with booze, which would makes it an alcohol issue as much as a GHB issue. I have had to babysit semi-conscious friends who were “G-eyed” for choking risk at raves years ago, although that involved multi-drug use so not easy to ascribe it to GHB.

I’m still extremely pissed off that they put these “damages to society” bits there, as most of them unsurprisingly are damages caused by illegality. Heroin is expensive because it’s illegal, if it cost the cents a dose it does where it’s produced, there would be fewer isues with crime, selling it on the black market means adulterants, or quality issues, illegality means you’re likely to lose your job, making paying for it harder.

Tobacco is just as addictive, but it isn’t illegal, you won’t lose your job for smoking (maybe in the US, where private insurance wants to become ever more invasive in the pursuit of profits), public health initiatives have helped reduce the amount of smokers, and taxes on the substance have helped pay for health care in places with mostly functional health care systems.

They all need to be treated as health care issues, and legalized, remove the profit from drug cartels in south america, from islamist groups in afghanistan and pakistan, and from the CIA in the US, among others. Illegality is dumb, is based on Protestant holier than thou attitudes, and used as yet another way for society to control the poor, and especially those who aren’t white.

Yeah, drugs aren’t on the whole, good for you, but a good part of the damage is due to treating them criminally, instead of medically.

At the very least stuff near the bottom of the list could be legalized?

I’m actually OK with opioids and meth being tightly controlled. Heck, not saying I want prohibition back (that’d be nuts) but the damage alcohol causes every day to so many people is just astronomical, there ought to be a lot more pushback on such easy alcohol availability even for adults.

Psilocybin (mushrooms) are legal in a number of cities now, perhaps LSD / MDMA could be next… MDMA (along with Ketamine) is being used for PTSD therapy now, and Psilocybin has a lot of therapeutic uses as well. All are quite safe being at the bottom of that chart…

It is a UK-centric chart, not sure if that matters too much?

Decriminalized, like alcohol. I agree that alcohol is a problem, the solution is almost never to restrict access (in terms of illegality) though, that just creates more problems as people head towards suppliers with few morals.

More education, less poverty,and more compassion. 90%+ of people can partake in alcohol (and many other drugs probably) without being threats to society and order. Some people need help, often drug use is that cry for help, or that thing that helps them get away from the pain.

Amphetamine is great for people who feel like they have no agency. It gives you so much fuckn control of your environment due to the hypermotivation.

Heroin is often used by people who feel like they are missing love and acceptance.

People often smoke weed because they feel like they’re not allowed to rest and have their own time. So they try to make the most of the little time they do have. That’s why so many working people trapped in the capitalist wage slavery rat race smoke so much.

Alcohol is useful for people who feel isolated and like they’relacking connection to others socially. It opens up those shells.

There’s a class of drug for every need the modern world fails to meet and the thing is: drugs really do feel like they’rebetter than not having your needs met at all.

It’s society that’s sick for the most part. At least as much as addicts themselves.

Certainly is for me! (At least in the “lack thereof” category)

Along those same lines, the benzos are all about suppressing anxiety. Did you know that the FDA recently added their strongest warning to benzos, the black box warning?

Includes potential for abuse, addiction, and other serious risks

Benzodiazepines can be an important treatment option for treating disorders for which these drugs are indicated. However, even when taken at recommended dosages, their use can lead to misuse, abuse, and addiction. Abuse and misuse can result in overdose or death, especially when benzodiazepines are combined with other medicines, such as opioid pain relievers, alcohol, or illicit drugs. Physical dependence can occur when benzodiazepines are taken steadily for several days to weeks, even as prescribed. Stopping them abruptly or reducing the dosage too quickly can result in withdrawal reactions, including seizures, which can be life-threatening.

Prior to benzos being invented, barbiturates were used (to suppress anxiety) and those are much more dangerous – way easier to overdose on, more drug-drug interactions, and more side effects.

Ah this is more of a UK thing perhaps, but yes, “huffing paint thinner” … not the smartest activity in the book…

Inhaling butane gas can cause drowsiness, unconsciousness, asphyxia, and cardiac arrhythmia. Butane is the most commonly misused volatile solvent in the UK and caused 52% of solvent-related deaths in 2000.

Tech investor Peter Thiel has led a $125 million funding round into a start-up aiming to make psychedelic drugs to treat mental health disorders.

Totally. Reminds me of rat park, which I first learned about here on bb a few years ago.

Rat Park was a series of studies into drug addiction conducted in the late 1970s and published between 1978 and 1981 by Canadian psychologist Bruce K. Alexander and his colleagues at Simon Fraser University in British Columbia, Canada. At the time of the studies, research exploring the self-administration of morphine in animals often used small, solitary metal cages. Alexander hypothesized that these conditions may be responsible for exacerbating self-administration. To test this hypothesis, Ale...

Yep. Fuck this right to hell.
There are safe, basically free ways to get psychedelics and marijuana. There doesn’t need to be an effing patent.

My favorite article on psychedelics and depression is this one, it is an absolute must-read if you haven’t yet:

Research into psychedelics may hold a key to coping with anxiety, addiction, and existential dread. Michael Pollan on psilocybin.

Considering most official anti-depression meds produce results barely better than placebo, some of the results from the studies on psilocybin have AMAZING results in comparison. Just incredible off-the-charts stuff like:

Griffiths’s double-blind study reprised the work done by Pahnke in the nineteen-sixties, but with considerably more scientific rigor. Thirty-six volunteers, none of whom had ever taken a hallucinogen, received a pill containing either psilocybin or an active placebo (methylphenidate, or Ritalin); in a subsequent session the pills were reversed. “When administered under supportive conditions,” the paper concluded, “psilocybin occasioned experiences similar to spontaneously occurring mystical experiences.” Participants ranked these experiences as among the most meaningful in their lives, comparable to the birth of a child or the death of a parent. Two-thirds of the participants rated the psilocybin session among the top five most spiritually significant experiences of their lives; a third ranked it at the top. Fourteen months later, these ratings had slipped only slightly.

For what it’s worth, I can personally vouch for their effectiveness in this regard. If you struggle with depression, I recommend researching the topic in depth. A friend of mine runs https://enthea.net/ and that’s a good starting point. Psilocybin can literally save lives.

(and they are correctly at the very very very absolute bottom of the potential harm chart for “illegal” drugs.)

The Legislature today is expected to pass the two pieces of "enabling" legislation designed to turn NJ voters' wishes for legal weed into reality.

Found another harm chart! Let me try to source it. And WOW that’s a lot of color bars…

If we lean towards legalization of Cannabis (which I wholeheartedly agree with, and it seems many US states do too, these days) then you could probably make a solid case for legalizing at least some of the drugs to the right (safer) side of these graphs as well. Probably starting with psilocybin which has already happened in a few cities.

Psilocybin decriminalization in the United States

Another harm chart in kind of a weird format:

I added the rings to 0.5, 1.0, and 1.5 for comparison. It looks sorted: least dangerous is Khat, moving up clockwise until you get to most dangerous, Heroin.

Weird that “solvents” and “cannabis” would be grouped.

in kind of a weird format

I believe that is what’s known as a Pie Shart.