Election Reform Ideas: What, How and Why

Recycling part of a post from an earlier thread:

Australia has plenty of problems, but voter suppression and electoral corruption aren’t amongst them. And the structure of our electoral system plays a large role in that.

Note: the methods outlined below are not the only ways to achieve these goals. However, they are methods that are proven to work, and similar strategies are used throughout much of the industrialised world.

Anyway, how we do it down here:

Want to limit the excessive power of the rich? Sensible controls on campaign expenditure and party donations, effective disclosure rules, public funding, non-fixed political terms (e.g. a majority of parliament can call an election whenever they want, but must do so at least once every four years) to keep campaigns short.

Want to stop the gerrymander? Election boundaries set by fixed, publicised rules and administered by another independent federal agency.

Want to stop extremists from taking over by controlling turnout through enthusiasm or intimidation? Again, well-resourced neutral voter admin and not-too-racist police. Preferential (instant runoff) voting. Proportional representation rather than local members in at least one house of parliament.

We also use compulsory attendance at the voting booth; $50 fine if you don’t show up to vote without a minimally-plausible excuse, but you’re free to spoil the ballot if you don’t want to vote. This one is unique to Australia, but it seems to provide substantial benefit with minimal downside.

Want to avoid a two-party system? Proportional, preferential voting and public funding of election candidates. In Oz we give moderate public funding based on the proportion of first-preference vote in the previous election. The cash isn’t enough to really matter for the major parties, but it helps keep the minors in the game while they build credibility and support.

None of those things are easy to achieve with the USA in the political state it is today. But that isn’t because democracy is inherently undoable, it’s because the US political system is so badly broken already. And it was broken on purpose, by the people who benefit from its breaking.

Some of these problems have been with the US from the beginning. But there has been an active push over recent history to make them worse; “money equals speech” and “corporations are people” didn’t come from the founding fathers. And the “people who benefit” are still here, still in charge, and forever getting richer from the proceeds.

With mail in voting WA uses good old fashioned scantron sheets. Quickly counted by a computer but can be hand checked when needed for a recount. I think that is probably the best use of human readable / computer readable for ballot counting we got right now.

Voting machines are just plain unnecessary, and add an avoidable point of failure.

Voting down here is done with paper and handwriting; they’re counted with eyeballs and mathematics.

While transferable voting systems look great on paper (I occasionally teach them when I teach the mathematics of voting) I would strenuously oppose it for our national elections. The tabulation is too dependent on the computer, and too hard to audit on the scale of US voting districts. Handwritten ballots would likewise not work with voting districts as large as ours, and if you made districts smaller, as great as that would be from a representation POV, it would make our legislature unmanageably large.

Making election day holiday is fine idea, but it is a state holiday where I am, and the increase in voting is not huge. Its not like more than a few places of employment close on such holidays. You might get more mail carriers voting.

W/r to gerrymandering, you could just automatically create equinumerous districts by one of several well known algorithms, but that will end up artificially splitting communities, and probably only work well in fairly homogeneous states. Independent redistricting commissions are a better fix since they can try to respect community groupings, but this is already not uncommon and it doesn’t seem to have fixed the problem. Some of the strange borders in current districts really do correspond to legitimate community groupings.

I personally think the system works as well as can be expected in a country this big. I’ve noticed here on BB that some of the loudest voices complaining about features of our system have come from people in other countries, and often reflect a lack of close-up, concrete experience with our elections, both the particulars and the scale. Many ideas simply don’t scale sensibly from a small country of 100 million or less, and I don’t think it is a coincidence that other countries the size of ours have their own problems with keeping some semblance of democracy functioning.

One thing I really would like to see is a move from primaries to caucuses. I’ve voted in 7 states, and in the three where I’ve caucused the decisions seemed to be much more thoughtfully made than in the others.

Human redistributing already does this. And what is wrong about it is that it’s done intentionally to dilute or concentrate a voting bloc.

Mathematical models already exist to draw equal-population districts that prefer geographic continuity and year-over-year consistency. When they “split a community,” it will be mathematically provable that it was the best way to reach those ends. And in the worst case, it won’t have been done to achieve a political goal.

One reform that I never hear mentioned, and which I am intent to force, is that of registering to vote by geographic boundary rather than a specific address. The US has since its inception explicitly legislated making nomadic and homeless life difficult. Probably for ethnocentric reasons. Many rights and responsibilities USians expect and take for granted are made prohibitive without having an address. Including the right to vote.

The excuses are usually that an address is required for administrative ease. Also it shifts the burden of proof from the civil servant to the citizen. Back in the 20th century I could maybe buy that the logistics of this would be difficult for currently existing government models. But the increasingly surveillance/statistically-driven nature of government now undermines those arguments, as it is really trivial to know where people are.

So, for example, suppose I live in Montana. If I claim citizenship of Montana, and spend a requisite amount of time within its borders, then I can vote, drive, and other such normal things. Living within the boundaries of the state is what triggers our mutual obligations. NOT me claiming some personal territory or property.

This would be a boon for homeless people, who are often discriminated against deliberately. Where “help” seems to involve a requirement to tie them to a fixed position rather than encouraging them to function in society.

Or hold them all at once so all the states actually get a chance to cast a meaningful vote for which candidates they want.

Screw you, Iowa and New Hampshire.

Or hold them all at once so all the states actually get a chance to cast a meaningful vote for which candidates they want.

Yeah the extended primary mess made sense in the days before instant communication and mass media… not so much anymore. Making a single primary vote and limiting the campaign run up would be a very good thing.

Human redistributing already does this. And what is wrong about it is that it’s done intentionally to dilute or concentrate a voting bloc.[/quote]

Or hold them all at once

That’s a good way of making sure the early front-runner wins the nomination. Without Iowa being early we would have had Clinton to vote for in 2008 instead of this year, and got her over with by now.

That’s a good way of making sure the early front-runner wins the nomination.

I don’t see any problem with putting all the debates and campaigning before any of the states actually get to weigh in with their votes. The logic of letting some states choose from a wide array of candidates and effectively excluding others from the process altogether escapes me.

It’s to spite you dirty hippies down in California.

It’s to spite you dirty hippies down in California.

That’s the impression I get.

Candidates for national office love visiting California when it’s time to schmooze with rich campaign donors, but they rarely make an effort to convince voters one way or another because California’s primaries come too late to make an effective difference in the Primary selection process and everyone assumes the state will go blue for the general election no matter what happens.

Same here. At least Trump won’t be showing up to screw up my commute like Obama did when he came up here for fundraising - which was the only reason he ever did show up.

everyone assumes the state will go blue for the general election no matter what happens.

They’re right though, aren’t they?

If you’re a downmarket candidate - not the 1st choice of the fatcats - you probably can’t afford to campaign in all 50 states.

If you want them staggered, why not have a random draw or something? Why always Iowa and New Hampshire? (other that their stupid state laws that say they have to)

Some restrictions on campaign spending so that poorer candidates can compete on a level (ish) playing field would be nice, too. But there’s that pesky 1st Amendment unintentionally screwing things up.

They’re right though, aren’t they?

Not necessarily. The state went Republican for six consecutive Presidential elections between 1968 and 1988 and a number of times before that. Remember, Reagan and Nixon were both Governors from here.

(ETA: Reagan was governor, Nixon ran for that office but lost)

Remember, Reagan and Nixon were both Governors here.

Sure about Nixon? Didn’t he lose that after losing to JFK? (to the father son of the current guy?)

Yep! California’s actually voted for the Republican candidate more often than the Democratic one since the early 1950s. 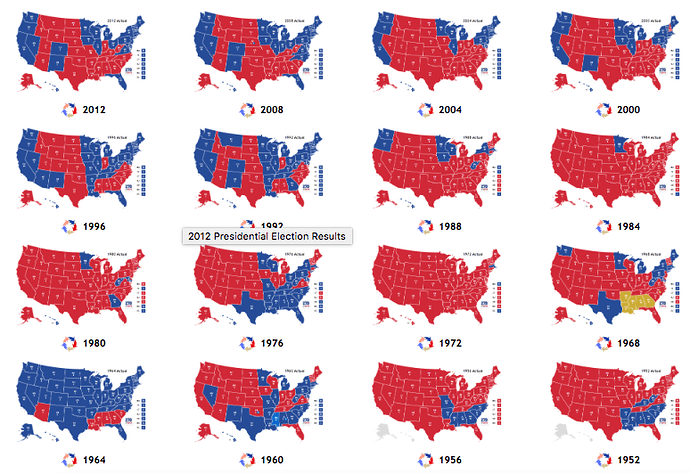 If you’re a downmarket candidate - not the 1st choice of the fatcats - you probably can’t afford to campaign in all 50 states.

Then the solution is “find a way to allow candidates to campaign in every state,” not “allow a handful of small states to control the primary selection process.”

Excluding the majority of the voters from meaningful participation in candidate selection is inherently undemocratic.