Total side note. Your site is driving me nuts. I cannot view anything on my phone here because I get this wanting repeatedly.

It seems like they’re basically just pissed that they can’t manage to permanently ban him (and I can’t blame them), which is reasonably the only thing they can do, so they’re throwing a lawsuit at him for the deterrent effect (both against him and other cheaters).

From what I understand, the mother filed a countersuit against a dcma, which, by our wonk copyright system, the company has to contest or could lose claim to copyright.

No one who watches a 14 year old’s screen capture of a videogame will decide that it’s as much fun as playing the game.

Clearly you have never met my son.

From what I understand, the mother filed a countersuit against a dcma, which, by our wonk copyright system, the company has to contest or could lose claim to copyright.

That is an incorrect reading of US copyright law on just about every level. Please stop.

Total side note. Your site is driving me nuts. I cannot view anything on my phone here because I get this wanting repeatedly.

We know! It’s annoying us too, and we’re on it!

You know I love you boo.

He was also involved in development of cheat codes for the game. It is more than a simple fan youtube video.

Where is there any reference to genericization? The quoted passage says “Under these circumstances, the law requires that we file suit or drop the claim.” AFAICT that is, technically, true, those are EPIC’s 2 options, and officially preventing lawsuits is what DMCA notices are supposed to be for. The case is obviously baseless of course, but that specific statement isn’t false. It’s just that the correct choice here was to drop the claim.

Same here with the iPhone. Can’t get through an article without numerous reloads. Makes me sad.

But I did get through this article and it reminds me of something I read today on B.B. Now what was it? Oh yeah! The Mooch suing a student journalist. Same story. Different douchbag.

could you PM me your address?..I’m going to Fedex you an iPhone charger.

This is an abuse of DMCA, but the things that DMCA allows corporations to do are pretty egregious, too.

I’ve seen it pointed out elsewhere that Epic is still able to sue for breach of the EULA despite him being a minor as the responsibility passes to the parent or guardian. The mother directly admits in her letter that her son used cheat programs that violated Epic’s EULA, which seems like a bad thing to be admitting to in this case. Personally I don’t care that this involves a kid, he persisted in violating Epic’s terms despite multiple warnings and a slap on the wrist via a suit is just the sort of thing that will stop the behavior as well as deter others from following his lead.

They claim he was involved in development. As i understand it, he denies this claim. 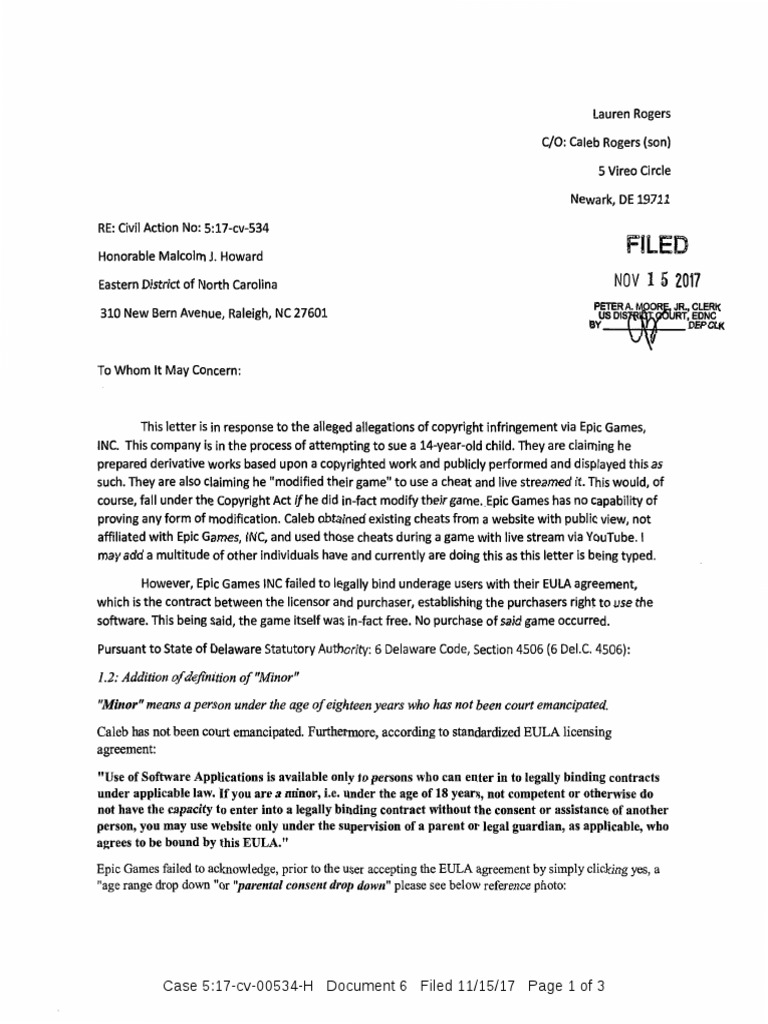 Letter filed on behalf of Caleb Rogers by his mother, Lauren Rogers.

Unfortunately, her argument about minors not being covered in the EULA is not accurate, because Epic Games states that you are assumed to be an adult in their privacy policy which is part of the terms of service which is part of the EULA. It’s interesting to see a “as I parent I didn’t know, and therefore there was never consent given to use you platform” argument, but I’m pretty sure that isn’t a valid excuse (INAL).

Caleb Rogers did some obnoxious things

I read on Imgur that he posted that Epic Games could “eat my ass” (meaning Caleb). The vibe I’m getting from elsewhere like Imgur is that he’s perceived as the loose cannon that could make things worse for many gamers in a war of attrition between gamers and developers.

They claim he was involved in development. As i understand it, he denies this claim.

my understanding of the case epic is making is quite different than what many news sources are stating, and it is largely being misunderstood. if my understanding is correct this is a much different and more interesting story than is being reported.

epic isn’t claiming he created the cheat, nor that he distributed it, nor that his video on youtube was copyright infringement, although those would all be standard things historically, and i could see how parts of their wording could be misconstrued. (also how can so many people miserably fail to understand that free-to-play is a for profit model and how it works)

my understanding is that Epic is trying something new legally, they are trying these new approaches:

this is somewhat new legal ground and this is actually a much more important story than is being reported for that reason. digital rights are tricky to understand and often tried in front of courts that lack the necessary understanding to make sound decisions. crazy times.