Ever had gooseneck barnacle meat?

Originally published at: Ever had gooseneck barnacle meat? | Boing Boing

They look beautiful. Not sure if that means they taste good, too.

Technical note: I see that @frauenfelder is marked as the author in the comments section, but on the BB post, it’s Jennifer Sandlin.

Nope. For some reason I have always found them creepy looking.

Thanks for the recommendation. Going to Portugal next month and will keep an eye out for barnacles.

2 bits of info from a Galician here

One, the Costa da Morte is not named like that for the deaths of barnacle harvesters. I mean, yes, a lot of them die - less nowadays but it is still a dangerous job. But the name is due to the more dramatic number of ships sinking nearby; there are > 500 documented shipwrecks. Again, much safer now with all the new technology but still, latest was the 2002 sinking of the oil tanker Prestige… that covered the Costa da Morte in oil

Second, price of the barnacles… yes, they can be very expensive, but you have to take into account that it is also a highly volatile price. Depending on size, how many have been harvested and the season, the price can go absolutely crazy, but then return to normal just as quickly. Main “peak” is normally around Christmas, because a lot of people want to make them for the big Christmas dinner, so the extra size barnacles can reach even 200 € or more for a Kg if weather has been bad and the harversters couldnt work as much… and then it can crash back to less than a 100 for the extra ones. The small ones wont even reach that number - normally they would go around 30 € per kg. Of couse you want the extra big ones if possible, but again, all that means that going to a restaurant and asking for a dish of percebes is not going to be by default a “I need a mortage” experience

And yes, even 30 € kg is “expensive” next to, say, chicken or pork, but nobody is going to eat the same quantity of barnacles.

Being from Porto, a few more things…
next week (night of June 23rd) it is the city’s big party (S. John Baptist for the Catholics, Summer solestice for the pagans). Everyone goes around with a hammer(fake) or an elephant garlic hitting each other in the head. Eating charcoal grilled sardines and peppers “all night long”… really.
Once in Porto, try the Port wine in the Caves… Porto is the place that gave the wine the name (although for tax reasons, in the olden times, the Caves all changed to across the river…)

They are also found on the west coast and I have harvested them on the coasts of Oregon and Washington and in Puget Sound. I don’t think that most beach foragers in those areas know about them.

I assume those prices include the shells in the weight, though? What percentage of the weight is shell?

I used to live in the Netherlands, where a kilo of mussels is considered a single portion, but only about 20% of that by weight is edible meat.

These are the barnacles that were thought to be the other stage in the life cycle of the barnacle goose.

Yes, those are the prices right out of the fish market, shell and all.

We have something of the same in HI. A local delicacy is opihi, or limpets, scraped off low tide rocks like the barnacles. They have been harvested so enthusiastically that they are now harder to find and expensive. Oddly, it turns out that Ireland has a surplus of large barnacles that are virtually indistinguishable from Hawaiian opihi; if Ireland would start collecting and exporting their limpets, they could make bank in HI. 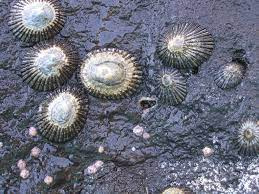 There are lots of limpets along the whole west coast of the US. They are chewy but very tasty. They are also not very popular with beach foragers so you can always get a lot of them,

Gooseneck barnacle meat? No. That would be too much like giving MTG a hickey.

If they are identical to Hawaii’s opihi, I sense a profitable opportunity!

Gooseneck barnacles ought to be served as a side dish with one of these - even better, I’d like to see “Gooseneck Barnacle-Stuffed Barnacle Goose Neck” 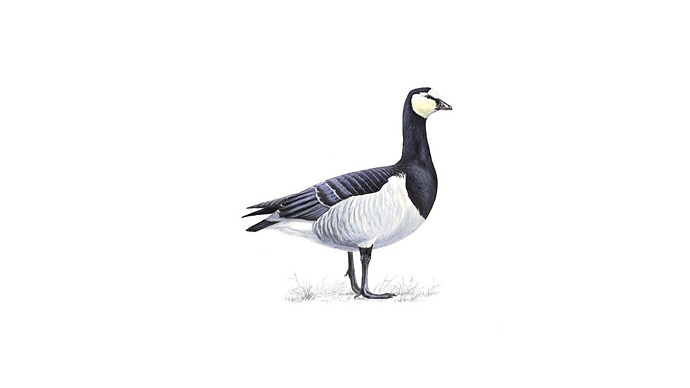 A medium-sized, sociable goose, with black head, neck & breast with creamy-white face, which contrasts with the white belly, blue-grey barred back & black tail

Technical note: I see that @frauenfelder is marked as the author in the comments section, but on the BB post, it’s Jennifer Sandlin .

May be connected to an ongoing issue with guest posters finding their comments links go back to their post - temporary action is being taken to get links to comments to work, I suspect.

Bolinas Ca. we would often harvested barnacles, black turban, and geoduck for food.
Here is a good article about how to use them: 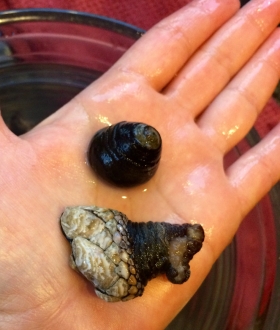 I grew up eating shellfish and seafood; my grandparents trawled for ship and had crab traps and everything in Grand Isle, Louisiana.  I caught my own large shrimp in the seagrass and soft-shelled c…

Apparently the blue crab Callinectes sapidus, which is similarly a sought-after and increasingly expensive delicacy in Maryland, is causing problems in France as an invasive species which destroys the local eel, oyster and mussel populations.

The problem is that this sort of seafood doesn’t travel very well- French fishermen struggle to sell the crabs they catch, and market prices there are a tenth of what they are in the US.