His quote in context is bad, but not as bad as it seems.

He’s suggesting the privatization of water utilities. Which, fuck that.

What’s particularly ironic is that in many cases the bottled water has higher levels of contaminants than the tap water. Flint is not the whole world.

(Written by someone who lives one town over from a Dasani bottling plant. That particular bottled stuff is basically city water, run through a filtering system that “removes” stuff that isn’t there in the first place. It tastes of the plasticizer in the bottle. The tap water doesn’t.)

Go to any fast food chain when abroad and politely ask if you can refill your water bottle. If there is a language barrier and there’s a need to access water while keeping conversation to a minimum then this app is pretty handy but my experience while traveling has been that you can typically get along and communicate your needs even if you can’t understand the other person. Don’t be pushy, act polite and smile as friendliness goes a long way.

you can typically get along and communicate your needs even if you can’t understand the other person.

True, one notable exception being non-English speakers traveling to Magastan.

with some tragically notable exceptions, in most of the united states, at least, it is.

True, but when Cities are dumping in large amounts of chlorine and other chemicals water has become undrinkable in the sense that that it tastes like a kiddie pool in August.

i can attest that “poland spring” is the same idea, municipal tap water “purified,” bottled and marketed as rustic.

They have done exactly that in the town of Fryeburg, Maine, where Nestle extracts tens to hundreds of millions of gallons of water annually from a pumping station that is owned by the family who owns the water utility. The Maine PUC eventually approved this ridiculous 25 year deal between Nestle and the Fryeburg Water Company after a while because at least one of the commissioners had to recuse himself as I recall, and more than one should have because they all had connections with Nestle. It’s a small state and after the paper industry was decimated first by Reagan and then just by the evolution away from people using paper for reading, writing, etc., Nestle is one of, if not the largest employer in the state, and the people who were and are on the PUC then and now are all corporate friendly attorneys making corporate friendly decisions.

This one in Fryeburg is crazy though, they are sucking up as much as 178 million gallons of water from that one pumping station. And they pay 0 tax on the water. Any attempt to impose any extraction tax has been killed by Republicans (obviously) but also corporatist Democrats. This state is poor and needs money. These crooks are taking millions of gallons of water out and don’t even pay a cent in tax for extracting it.

They do pay the family that owns the water company and they pay them quite nicely.

Just another note, they have other pumping stations about 5 and 10 miles away from this one that they are filling trucks at daily as well. I’m not a hydrologist (?) but I took some geology courses and clearly this is the same aquifer. They are probably taking 300 million gallons of water annually from this aquifer alone. Crazy. 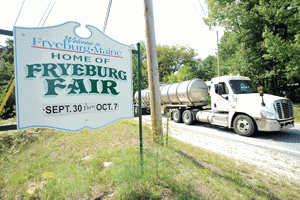 The new agreement would change the way the Fryeburg Water Company charges rent on the two-acre filling station leased to Nestle, set a yearly minimum that Nestle agrees to extract,

This is especially noticable when one has an untreated well in their yard.

If only there was some sort of “internet for water”. Some sort of “tubes” that could deliver water directly to where it was needed.

Of course, you know who they need as a celebrity spokesperson:

Let’s not be so hasty. IIRC, She wouldn’t douse a Burning Bed.

Ye gods, the United States of America truly has changed in the past few decades. When I first moved to Europe, I made fun of Europeans always drinking bottled water, and the dearth of drinking fountains. Before, bottled drinking water was something I associated with southern California, where the water came in these 15 litre jugs. But buying some brand name tap water? What a weird idea!

You you know of dopper.com?

Now if only we could make this work wirelessly, delivering water straight from our phones in our pockets.

Nestle is one of, if not the largest employer in the state

according to the maine department of labor, nestle (listed as perrier-poland spring group) ranks at no 42 with fewer than 1000 employees, placing them in the same league as new balance and marden’s. that’s part of the problem, though, because a lot of these companies get support from the perception of people who think they’ll provide a ton of jobs, when the reality is that they hire relatively few people in the long-term and contribute very little back to the communities they exploit. though you’d be hard pressed to find a significant environmental group or cause in the state that hasn’t accepted donations of poland spring bottled water as an empty gesture of goodwill.

Shouldn’t it have a little dousing rod graphic interface?

You are absolutely right, Jonboy. I didn’t even think about Mardens, Hannaford, Shaw’s and wal-mart to name a few. I just instinctively think of the largest employers to be manufactured related in some way, foolish on my part, especially in this state in 2019.

Just downloaded and noticed there is a huge void in the GGNRA - our largest and highly visited National Park in the SF Bay Area. The NPS needs to get rolling on this!

Unethical life hack: this can also be used as a list of places to poop. Any accusations I have pooped in a fountain are entirely unfounded however - I’m just noting this application could aid someone who poops in water fountains, which I absolutely do not do. Capiche?