It’s all fun and games till somebody gets a Jart in the eye.

No deal. Without steel tips, they’re not Jarts…they’re Plunks.

I’m kind of a stickler of tradition. I keep my vintage lawn darts in the garage next to the vintage boxes of DDT and cans of Dutch Boy lead paint.

When I was 10 or thereabouts, I wanted to see how high I could throw a lawn dart. So I did. Straight up.

It was tipped with hard plastic rather than steel, but it was still a salutary lesson in how much scalp wounds can bleed. From eye-witness descriptions, I gather the effect was similar to that in the climactic scene of Carrie. And I was washing dried blood out of my hair for weeks.

They have to have some weight to them or you’d never get any distance.

Eventually someone will build a ballista launcher capable of serious impact.

My brothers and I used to play catch with the old-school metal lawn darts. We would lob them at each other and catch them in half inch thick wooden boards. Honestly, I am surprised we made it through our youth…

I agree metal tipped Jarts were more fun. I’m also sure they needed to go. 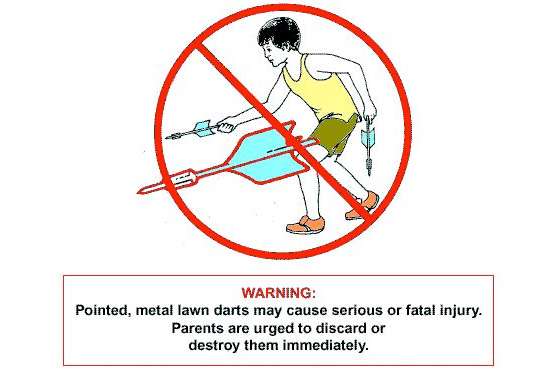 How One Grieving Father Got Lawn Darts Banned

Lawn darts, or Jarts, were all the rage in the 1980s. With a few Jarts, a few friends, and a few beers, American backyard-barbecue-goers would lay down small plastic hoops as targets and play a game not entirely unlike horseshoes. Each player would...


I listened to a great story on RadioLab last night about how the effort to bring the Kirtland’s Warbler from near extinction resulted in the death of a young man (trapped in a prescribed burn). The author wondered if saving one of about 60 species of warbler (in the US alone) was worth a human life. Along those lines, is the survival of one of a large number of ways to have fun in your back yard worth a human life?
4 Likes
oothoon September 16, 2018, 8:16pm #10

And for my 2nd post in 18 months, I will share this catchy tune that manages to be hilarious without being cruel:

It was the third of July and the weather was fine
Ed brought the hot dogs, the croquet set was mine
But the red ball was missing, three mallets were bent
Ed suggested lawn darts, so to K-Mart we went

We looked by the yard games, we looked by the grills
But we couldn’t find lawn darts over water or hill
So we talked to the sales-clerk but she started to cry
She said they’re off the shelves now, and she told us both why

We both felt so bad that we gave up the search
Ed went to bed and I went to church
Now we never grill hot dogs and we don’t play yard games
Since we heard that sad story, things just aren’t the same

I remeber when bouncy-houses were made with steel tips too.

Not the greatest name, but maybe it’s just me. When I see “jarts,” I don’t think “darts,” I think it’s referring to some sort of fart. Like farting while wearing jeans or something.

I became rather skilled at throwing cards after I saw a demonstration on To Tell the Truth. My brother tried it using one of those inflexible metal Army-issue hand mirrors from the Korean war era, and guess where it landed?

In his own head.
It didn’t fully penetrate the skull, but it did stay stuck for a moment until he started yelling and dancing around.

Or you can only play with them while wearing jorts… 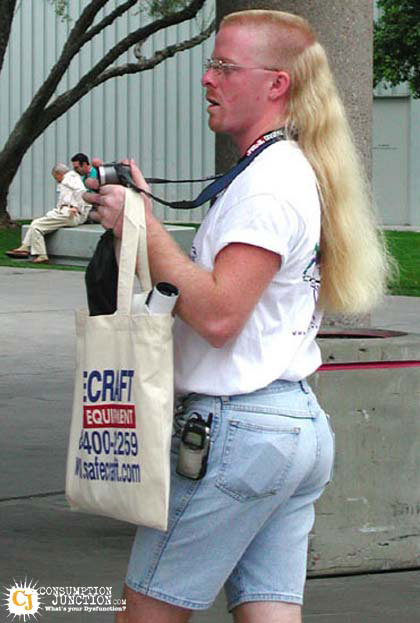 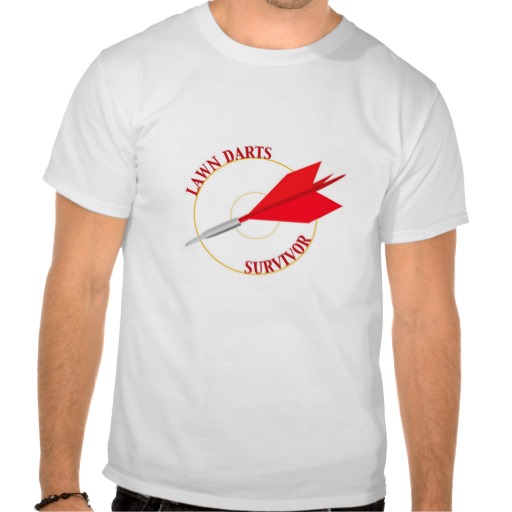 Also did that with my brothers. But with the old school kind. It went REAAAAAAALY high. Then came down REAAAAAALY fast…right in the middle of where the three of us were standing. There was no time to track and adjust/ move out of the way.

Tacit agreement to NOT do that ever again was rapidly reached.

You can still buy them from the UK apparently. They just get shipped to you as a kit of parts. The parts aren’t illegal. Playing with them isn’t illegal either. There are even tournaments in the US.

Jart? Is that what you get when you shart in your jorts?

They’re pretty easy to make. You’ll need some cardboard, some pvc pipe, some rebar, and some sugru. Sharpen a 1 foot piece of rebar. Sugru that to a 2 foot piece of pvc pipe. Cut four slots into the other end of the pvc pipe, then fashion 4 fins from the cardboard and Sugru them into the slots. Boom! Lawn dart. Throw it like a javelin or drop it from buildings. Great fun.

How is it fun if it doesn’t stick in the ground? You could play this version with sticks and a rock.