All of the dialog in The Sims games is in “Simlish”, a gibberish version of American English. The Sims 3 has radio stations that play pop music with the lyrics in Simlish, some of which are real pop songs with the vocals re-recorded by the original singers.

I’ve always wondered if versions of The Sims localized into other languages include Simlish versions of that language.

(Also, I just remembered that Rayman 2 — one of the greatest video games of all time, I’ll have you know — had dialog in French-accented gibberish. One of the things that ruined later Rayman games for me was that they ‘advanced’ to intelligible dialog. Once you could understand what the characters were saying, it turned out to be really stupid.)

A gibberish song many of us are familiar with is the ending theme song to the WKRP in Cincinnati sit-com. Originally it was supposed to be a test track to see if the producers liked the sound of the music, so gibberish was sung for the vocals. The producers liked it, and kept it.

I’m pretty sure that this is the normal territory for several recording artists.

My daughters and I have loved listening to this ever since we first heard it on BoingBoing 4 years ago. It’s great listening to them try and sing along.
http://boingboing.net/2009/12/17/gibberish-rock-song.html

This is how the RW sounds to me.

Something I liked about the Japanese band the Boredoms is that you could tell when they switched back and forth between American gibberish and Japanese gibberish in their songs. They even sang in a specifically James Brown gibberish.

A gibberish song many of us are familiar with is the ending theme song to the WKRP in Cincinnati40 sit-com. Originally it was supposed to be a test track to see if the producers liked the sound of the music, so gibberish was sung for the vocals. The producers liked it, and kept it.

That’s hilarious! I had no idea.

And while we’re all on the subject, here’s my favorite, Charlie Chaplin singing gibberish at the end of Modern Times:

And it was also the first time his voice was heard in a movie.

According to a 1980 DV news item, the gibberish song Chaplin
sings “stems from a classic old ribald joke about the girl who goes to
[a] pawnbroker to cash in the ring she earned by getting picked up only
to be told by him it’s a fake. The tag-line, uttered by her, was ‘My
God, I’ve been raped!’”

You can even hear the “pawnbroker” word, and everything that happens in the story is clearly seen in his pantomime.

EDIT2: Hey, here’s this song with this line! But why is it cut in most clips, including the full film I found?

The blonde dancer in the B&W video is Raffaella Carrà, who was the singer in the Beatles Medley video recently featured on Boing Boing.. I gave a link there to Prisecolinensinenciousol, here is a link to her Tuca Tuca.

Thanks for reminding me of Prisecolinensinenciousol again.
When you first posted this video, years ago,
I inflicted it upon absolutely everyone and I laughed every single time.

I recall seeing a video on youtube a couple years ago, taken by a US soldier of one of his Afghan soldier counterparts doing a hilarious “American Gibberish” impression, complete with mirrored glasses and bubblegum.

For the life of me though, I’ve never been able to find the video since.

Speaking of Chaplin, his earliest Tramp films are now 100 years old. I thought they might impress the kids, but they weren’t having any of it. “It doesn’t have any words!”

Utterly my favourite video of all time. At weddings, when the dance floor beckons late in the night, Prise…sol is the AV expression of my internal dancing disco man.

I always found it fun to hear how much stripping all intelligible verbal content never really made much of a difference to the songs. Who needs lyrics?

Shit, my kid won’t even watch anything in black and white…

To understand Mr. Slim Gaillard you might need this dictionary. 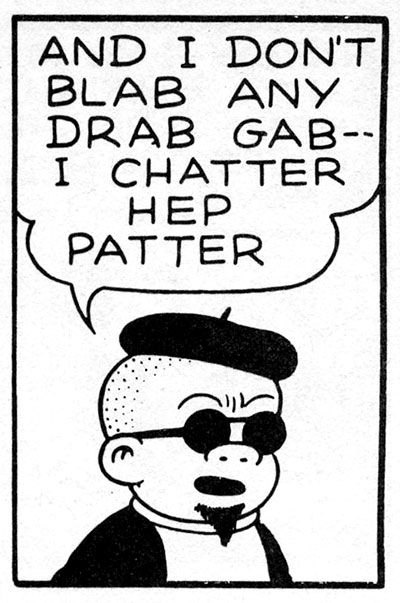