ugh, I am no fan of the Koch bros, but Harry Reid is becoming insufferable.
hey Harry, drink some coffee, get jazzed up, READ YOUR NOTES before speaking in front of the entire damn country. Don’t accuse the Kochs of doing the same evil for Rs that many do for the Ds. Money in politics at this scale is a huge problem but this kind of thing simply does not help.
His comments on Affordable Care Act detractors that “all Obamacare woes are untrue” had to be taken back as hyperbole; and without hesitation foxnews gave the headline “Harry Reid walks back claim that ObamaCare woes are bogus”

Harry, you are not helping progressives. Tone down the rhetoric and bring real facts with real passion.

Don’t accuse the Kochs of doing the same evil for Rs that many do for the Ds.

The Kochs are effectively seizing control of individual states, dictating the precise language of entire legislative agendas, voiding local elections, changing the election laws so their puppets stay in office forever, and disenfrachising millions of voters.

Sounds like you are mostly not a fan of Harry Reid. What -do- you think of the Koch Bros?

“…whoever has the most money, gets the most free speech…”

The first truth is that the liberty of a democracy is not safe if the people tolerate the growth of private power to a point where it becomes stronger than their democratic state itself. That, in its essence, is Fascism—ownership of Government by an individual, by a group, or by any other controlling private power.
-FDR. message to Congress, 1938

A much younger Harry Reid, opening a can of whup-ass. 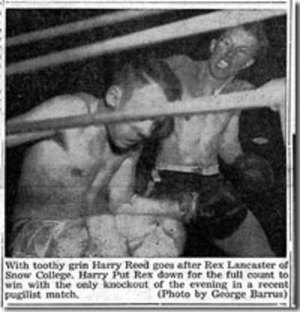 If you have enough money to perpetually make more money just off the interest and investments, it’s essentially free to you. To normal people, money is earned and spent to live. For the Kochheads, money is used to control others.

This is the tragedy of the working class Republican base. They’re so paranoid about Obama taking their guns and precious liberties that they don’t see that corporate America is already dictating their lives and livelihoods.

Those that use their wealth and power to do nothing more than get more wealth and power, especially the Koch brothers I do not like. What I do like is pragmatic defensible and eloquent characterizations of the real and tragic problems the bastions of power present. What I seem to get is a half assed ad hominem attacks where we could have had have real substance and get appropriately and justifiably pissed off.

There’s nothing wrong with expressing disappointment when one of the few people in a position to call attention to a serious problem do a poor job of it. It’s a paint-or-get-off-the-ladder situation.

Koch Industries ranks 45th on the current list of major political contributors as compiled by OpenSecrets.org.

For every dollar by Koch Industries, the top ten unions on the list chunk in a total of about $14.

The real indicator of corrupt practices is the biggies (AT&T, Comcast, Honeywell, Goldman Sachs, Natl Assoc of Realtors, Northrop Grumman, GE, Verizon) who give close to 50/50, thus making it very difficult to find any candidate who will cut off their access to the trough of tax and regulatory breaks.

Never bring a fact to a Koch fight.

Harry Reid would not approve of this message.

Bleh. It was if he was reading a bedtime story. I nodded off a few times, and it’s morning.
It’s the system. Both sides need to operate in a climate without campaign donations, lobbyists,
and promises of wealth and rewards after or during office.

BTW, as much as I think the obsession with Koch/Soros, depending on your political flavorings, is essentially a political bogeyman, the Open Secrets link is only for 2014 giving. Clearly since the 1990s the Koch brothers and Koch industries have had an outsized influence both in direct giving and the very successful system of nonprofits they have set up to raise money to push their agenda.

It also doesn’t reflect the millions of dollars in lobbying that Koch Industries and its subsidiaries do related to fossil fuels that Cory references in the OP.

tl;dr - These people disagree with me, and have the gall to fund advertisements and candidates that oppose my political agenda. Therefore, they are evil and must be censored.

The problem with this argument is that the climate you describe will never exist. The federal government uses politics to hand out over three trillion dollars a year. With that much power and wealth, stopping people from trying to get a piece of it for themselves is like trying to take gravity offline - it simply isn’t going to happen.