It’s called asymmetric warfare. When a peace officer abuses the civil rights of a random civilian, it’s not anyone’s problem but the random civilian and whatever lawyer they can afford. But woe to the peasant who lays hands on a police officer without making a clean getaway! They quickly find out they might as well have layed hands on every uniformed serviceman in the country!

So the gun-toter’s argument that we need guns to counter the force of the governent, just doesn’t hold water. It’s not enough to carry guns, you’d also need uniforms and a flag. 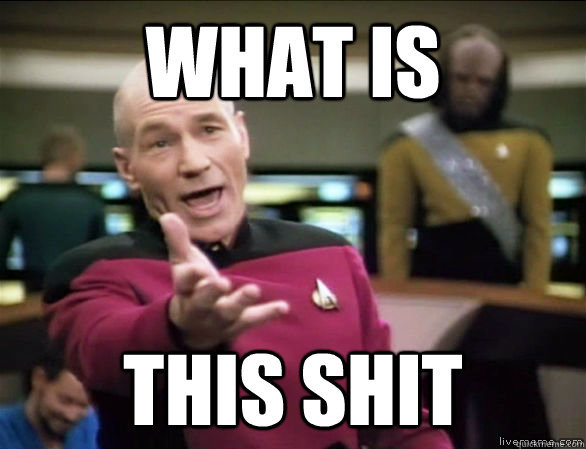 I would rather let my kids play with toy guns (indoors only, depending on my partner’s and therefore their skin color).

When a peace officer abuses the civil rights of a random civilian, it’s not anyone’s problem but the random civilian and whatever lawyer they can afford.

Why would you ever assume this to be the case? Police don’t only claim to be acting on your behalf, but that of the public at large, which includes practically everybody. Also, it seems rather naive to assume that, if you can trust the institution of police to abuse you, that the rest of the justice department will be impartial and act in good faith. Each of us is personally responsible for what is done in our names.

But woe to the peasant who lays hands on a police officer without making a clean getaway! They quickly find out they might as well have layed hands on every uniformed serviceman in the country!

Sounds rather indiscriminate. But, my point was, the converse can also easily apply. I am not clear as to why you assume this relationship to be asymmetrical.

So the gun-toter’s argument that we need guns to counter the force of the governent, just doesn’t hold water. It’s not enough to carry guns, you’d also need uniforms and a flag.

I don’t know that it follows, since I am not clear on your fundamental assumptions here. Anyway, I was not talking about guns, but rather replying to your comments about:

If officer friendly can use tear gas and a riot shield along with his night stick, then there’s a way to rationalize that he’s only doing his job.

What is the significance of your remarks about “uniforms and a flag”? Uniforms imply a specialization, implying that civil society is not the concern of the average person, but only a certain segment. And USians do have a flag - the one their government hides under while trying to evade accountability.

Well possibly because I have actually seen the executioner set on the shelves in a toy shop. Happy smiling prisoner bent over on the chopping block and all. I wish I could find a proper box picture.

Well that and they had a medieval executioner at one time among other sorts of odd things. Cowboys and Indians, a medical operating room, policeman harassing a homeless person, wolves attacking a moose. So this seems totally normal for Playmobil to me.

I guess I’ve become sort of the official playmobil-weirdness defender over here after the discussion of some previous outrages.

Let me say this, aimed not at you but at the vaguely defined imaginary outraged “won’t you think of the children”-er: if you think it’s not appropriate for your children to play with toys themed after crime/police/hunting/religion/racial or gender stereotypes/nuclear power/pirating or whatever it is that ruffles your feathers, good news: you’re the one, as a parent, who gets to educate your child as you see fit. Stop expecting the damn toys to do the educating for you.

Playmobil has always made toys mirroring the parts of our own culture they think boys and girls might already be interested in enough to want to play with, including “bad guys” and even some stuff that some might find exciting and others distasteful. Are those themes verboten to you and yours? Channel the outrage into forbidding them in your household, leaving them for the children of less virtuous parents to consider as they see fit, and everyone is happy.

I prefer that arrangement to the blanket, overwhelming political correctedness that pervades the era, but feel free to disagree.

(It just occurred to me, too late, that I could just link to what I said exactly one year ago and save myself the trouble, since it’s the same counter to the same reaction, all over again.)

Nah I agree with ya. I think they have great stuff. Heck I think an operating room is an amazing idea for a toy set really. Even the executioner set was fine but it was just weird with the HI I AM HAPPY AS CAN BE TO HAVE MY HEAD CHOPPED OFF smile on the prisoner. Kids get interested in all kinds of things that rarely translate into what they really want to do in real life, or what they do when they grow up.

Saturn, the toy manufacturer from Jodorowsky’s The Holy Mountain (1973): 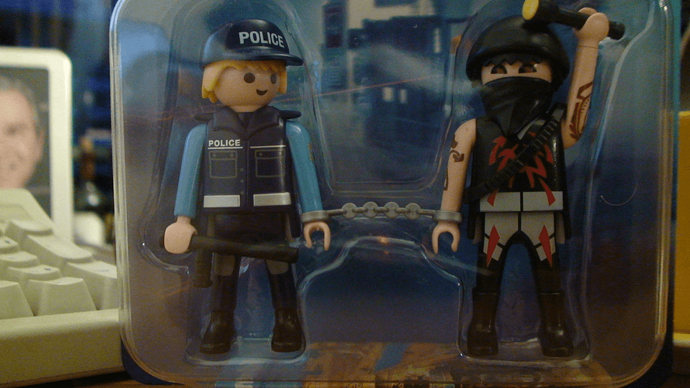 Outside one fairly mild alarmed review, everyone seems to love them and think them perfectly appropriate…

Well, parents of 7 year olds were mostly kids when we normalized endless war over here in the US.

As Bill Hicks said…“I would hate to be a dustbin in Shafsbry tonight.”

ATtiny chip, SPI flash with the sound, piezo transducer driven with PWM, CR2032 coin cell (possibly even a smaller one). One timer that calls interrupt for reading sample and setting PWM, one GPIO for triggering the output.

For bonus points, ATmega32u4, microUSB, small Li-ion cell, more GPIOs for more samples, and ability to upload your own sound to the flash.

Edit: Also, a possibility of adding a wearable cop-cam for recording or realtime-streaming the point-of-view action. A little camera module of the front-facing cellphone kind is less than a quarter-inch sided cube, some such chips have on-chip JPEG compression, and if they can be read out via SPI, they could be directly coupled with e.g. ESP8266 for low-framerate MJPEG streaming. (More likely we’ll need to read the data out via the parallel interface and use a microcontroller to shove them into the serial port of the ESP…)

I’m saving that for the “militarized police” Furby set.

Maybe we should call you ShaddackClause, since you seem so interested in making toys 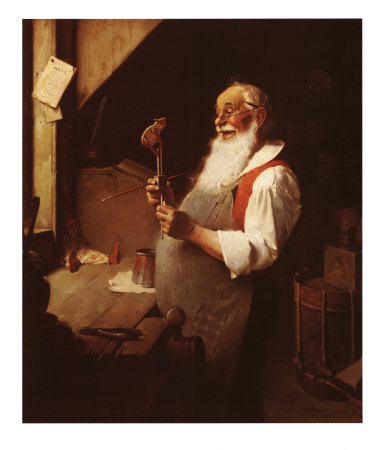 Maybe we should call you ShaddackClause, since you seem so interested in making toys

EVERYTHING is a toy!

(I learned this from cats.)