During the Vietnam war, I was a codebreaker for the Army Security Agency and we also had morse code intercept operators that could copy at righteously fast speeds - they were called “Hogs” due to the last letter of their MOS - 05H. Knew some guys that could easily copy this guys speed. Hard partying bunch that often served weeks or months in a row without a day off. Many are still with us. Google “7th Radio Research Field Station” for more info on one of our posts (I was there for a year). We all wore red ball caps that had “Cobra 7” on them. And as a note to back up a previous comment, there were, in fact, women hogs that served there.

Since it’s clear that the key is not connected to anything, how do we know what is happening here?

The key is connected to a sounder. You’re hearing a coil tapping out the message.
You know what message he’s sending by being the other half of a human UART.

All I see is a twisted pair wire connected to the key and terminating in a plug lying on the floor. What am I missing? 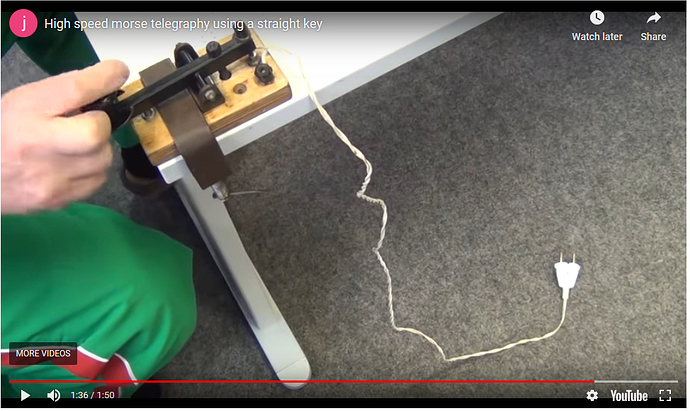 American Morse is landline or telegraph Morse listens to the spaces between the clacks. This is rarely heard in the real world.
International Morse listens to the sounds of the radio signal when the key is depressed.
https://www.youtube.com/watch?time_continue=1&v=pRuRE-Bwk1U&feature=emb_logo
This is more common.

Most operators moved from straight keys to semiautomatic keys (Vibroplex bugs) to reduce carpal tunnel and increase the speed.
Modern operators often move to iambic keys (one side generates dits, the other dahs and can alternate is held together) or keyboard. Both of these required electronics or a computer to connect to the transmitter.

Come on, Rob. if you’re just going to make stuff up, then you’ll have to make it more believable than that.

Top 10 rappers Eminem is to afraid to diss

I advocate that everybody learn Morse Code and try to both send, and, especially, interpret it coming at them; now that computers can be your teachers and drill instructors, it just takes time and free software you can get for phones, and everything else.

It’s not that its useful, though who knows, in some extreme circumstance, it might be. (Everybody loves the YouTube of the Korean war prisoner blinking TORTURE with his eyes as he “confessed” to war crimes. You don’t always need more than one word per minute…)

What it’s good for is impressing you with how good these people are. Getting to five words a minute is HARD, just a couple of hours a day of practice. I got to about four before packing it in. The only way to do even that was to be in such a trance that you had no idea what the message was until you looked down at the sheet with your copied letters on it; my brain had no time for the words as it just wrote down letters.

I still check that I have the whole alphabet memorized, a few years later. The little-used letters like X and Q and J (yes, J is rare) slip away on you. And, hey, I might need it some day.

In 1972 it was 10WPM for the amateur license in Canada, I can’t remember how fast for the Advanced, but 15 sounds right.

That stayed till restructuring in 1990, when things were rearranged and a simple Basic license added, 5WPM for that. Until code was dropped, I forget what year.

Watching this I was seriously tempted to get one of these things, spam it as fast as I could, and see how viral it would get before a radio codger exposed me as having tapped out salidkujghaisuerbvlaiusdfbvliasdufbgasdrfhgaerhadfoubaslikughleiwugnlIasdfbliuhlvi

Aren’t their programs that translate MC clicks to letters?

Could someone strip the audio of this and feed it into that? Because I can’t do it.

Kinda a starting point…but I think you’d have to slow it down a bit and then feed it to the translator.

Fun fact, morse code is not a binary scheme.

basic american license was 5 wpm. Technician was just another written test so that was easy. Of course, to get access to all the HF voice bands you needed a general class, which was 13 wpm. Extra was 20 wpm (!)
After about 10 wpm, you really need to stop listening to individual letters and hear them as words. I never got to that point and passed the general by the skin of my teeth.
That was thirty years ago and I still remember being a frustrated 15 yo yelling about having to learn morse code so I wouldn’t have to use morse code.

Vibroplex is strictly electromechanical. The dits are made by having a pair of contacts that closes as a weight bounces on a spring. There were two-paddle mechanical keyers back in the day - some of them had clockwork. You don’t really need electronics - it’s just cheaper and easier nowadays.

73 de ke9tv, Kevin (I liked the Advanced call, so never changed when I made Extra. But I did have to learn high-speed CW. I’ve lost it all now.)

Didn’t the original telegraph machines have tiles that could be placed in the machine to automatically encode the signal?
I’m CERTAIN they had paper marking “output” devices.

There was a Jay Leno episode where he pitted a millenial with a number pad phone (dumbphone) against a morse code expert. The kid got smoked.

It’s easier to hear with tone rather than just the contacts clacking.

Just love it! This is now in my Must Visit List.