How Dogs Love Us: A Neuroscientist and His Adopted Dog Decode the Canine Brain

We don’t know the details; but I think “So much better than we do that we should probably be ashamed.” is a reasonably accurate summary.

I do not need an mri to know my dogs love me as if I have never made a mistake, or they just really adore a bumbling clown.

Is “adopted” necessary in this subtitle? Did we think it might be his biological dog?

Is “adopted” necessary in this subtitle? Did we think it might be his biological dog?

Scientists can be pedantic, too?

Did we think it might be his biological dog?

Are you happy? Your dog can tell | Science/AAAS | News

Now, researchers have trained dogs from a variety of breeds to look at a pair of photos arranged side by side—one showing the upper half of a woman’s face looking happy and the other showing the upper half of the same woman’s face looking angry—and pick out the happy expression by touching their snouts to it (pictured). When then shown the lower halves of the faces or pieces of other people’s faces, the perceptive pooches could still easily discern happy from angry. Another group of canines similarly learned to identify angry faces. Dogs in a previous study that distinguished expressions on whole faces could have done so using simple visual clues that reappeared in every face: the white of teeth in a smile, for instance, or creases in angry skin.

Glad to see that all human neuroscience problems have been solved and questions answered, freeing up time/energy/resources for this.

They “love” you because you feed them.

Too bad that there’s absolutely no chance of learning anything interesting about human cognition by examining a non-human model organism that is known to have (quite recently in evolutionary terms) gained a number of human-like abilities in the area of reading human cues and interacting with humans.

That sounds like the sort of thing that definitely couldn’t teach you anything. Especially if you were to take advantage of the supply of wolves that are nearly genetically identical but don’t have nearly the same degree of skill in reading human affect. That would be a totally illogical way of attempting to unravel a set of processes that is brutally complex in humans.

In fact, why are we bothering with ‘research’ at all, when it requires assuming that some useful generalizations about classes of objects can be made? Clearly the world is nothing but once-offs that can only ever be analysed in isolation and which cannot conceivably yield generalized information.

Scientists can be pedantic, too?

Give dogs some credit. A dog’s love and its dependency on food and the person who dispenses it are not the same thing. If that was true why would dogs fear those who mistreat and abuse them? Love and fear aren’t the same.

They love you because they are pack animals, and you are part of their pack. If you have raised your dogs properly, you are their Alpha. The Alpha’s mate and children automatically rank above others in the pack hierarchy, and the Alpha can designate any other creature (human or not) to have pack membership and ranking. It really is that simple.

Just as creatures like orcas, humans and elephants are genetically programmed to love their children, the dog is genetically programmed to love any pack member that is above it in the hierarchy. If they were humans they would be perfect slaves. But it’s not fair to judge them so; on their own terms they are the descendants of wolves who were beautifully evolutionarily adapted to be pack carnivores, mutually reliant on a group that lived in shared quarters. Unstinting love for the pack’s hierarchy makes the pack stronger and more likely to survive, and is thus an evolutionary selection factor.

I’ve always considered “adopted” as meaning they rescued it from an animal shelter. For people who get their dogs from pet shops, puppy mills and breeders, I would use the term “bought”.

Dogs are better than people. 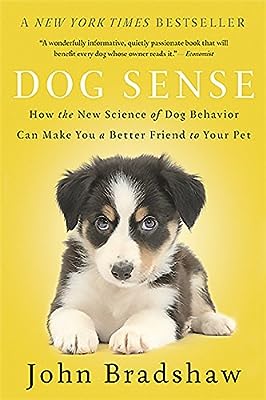 Dog Sense: How the New Science of Dog Behavior Can Make You A Better Friend to Your Pet

Title: Dog Sense( How the New Science of Dog Behavior Can Make You a Better Friend to Your Pet) <>Binding: Paperback <>Author: JohnBradshaw <>Publisher: BasicBooks(AZ)

is a great book along the same lines. It focuses more on behavior than on neurology, but also a from a well known scientist in dog research.

I would refer you to the work of David L. Mech who has studied wolves for 50 years and has debunked the old alpha wolf/pack mentality myth. He published an article in 1999 in The Canadian Journal of Zoology and another in 2000 in The Canadian Field Naturalist that explain the wolf social structure which is family based and not one of a constant struggle for domination. This is the current thought among contemporary progressive animal behaviorists and trainers. Cesar Milan and his ilk are to modern dog psychology as FOX is to real journalism.

IMHO the word matters because the dog came into the man’s life with whatever baggage the dog’s previous life(s) left him. It’s pretty much a given that a dog raised from a puppy by a kind and unabusive person will bond (love) that person without hesitation. Taking an adult dog with an unknown background into one’s home and life can be a gamble and once the dog understands it can relax and begins to trust the person it lives with the bond, as it grows, is significant in that the dog made a conscious decision to go that way–to love.

I read a dog book around 2000 that I liked. I was just googling a bit trying to find it, but no. The part I really remember (and not very well) was that during the time neanderthal man (or whichever) was transitioning into humans was also when wolves transitioned into dogs. Therefore the author stated (and I believe it was evidence-based, or presented that way anyhow) that we had a long enough period of co-habitation that we co-evolved to understand each other. It sounded cool, anyway; I bought what he was selling but you know how it is with pop-sci books.

You’re correct in that he transition from wolf to dog was complete, hence the false comparisons. That’s what Mech and so many other scientists and animal behaviorists are saying. Genetically speaking the wolf/dogs that were the most compliant and least fearful of humans would be the keepers and those traits would be more developed in their progeny as the ages passed.

uh huh, but what I seem to remember was that it worked both ways; the proto-humans that were able to incorporate having the dogs live with them ended up being the most successful, survived, and became us. therefore a unique mutual empathy developed. I don’t remember it very well though, I don’t want to spread misinformation.