Rotary phones work when the electricity goes out.

In 2013 we had two power outages that lasted 72 hours each, one of them in the winter. Our landline was our only link to friends, relatives, and emergency services, which is why I still keep a corded phone in a drawer just in case. (Touchtone works fine.)

You can get a nasty shock playing with those wires.

As I learned at one summer job wiring phone racks.

We did not have a dial phone until I was in my teens.

it takes a lot of voltage to drive those bell ringers

My brother-in-law worked as an electrician for another city’s power company. He’s told me a few secondhand tales of the phone guys using their thumb to check the connections in one of those little gray utility boxes. They’d just rub their thumb down where the wires were punched into the box and feel a tiny tingle to indicate they were connected…unless one of the lines had a phone ringing!

Mr. Burns answers the phone in the way it was proposed by Alexander Graham Bell.

I saw this movie (below) years ago, and in it, James Garner and Lee Remick are each using a rotary phone (looked exactly like a desk phone) in the car. Whenever I mention this scene to phone dorks, they trip over themselves to try and explain that “…those aren’t really cellphones, they’re radio phones/satellite phones/etc.” The part that really stuck in my memory is that James Garner has to go through the same chit-chat about the weather with every sucker he places a call to. The Lee Remick character snarks, “65 dollars a minute for a weather report.” 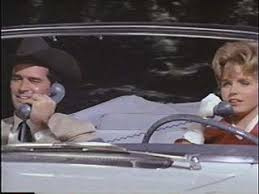 I’ll have to check it out. I’m a sucker for retro-futurism in old movies.

… and J Ray, Ray J and J R call him on the car phone just to say hi. And one guy who got the wrong number.
I’ve got to find a DVD of this film.

But yeah, technically not a cellphone in the modern sense, more like a (not very reliable) radio link to a landline.

The big difference is that there could only be a few (well less than 100 anyway) simultaneous calls in the entire metropolitan area. They were toys of the 1%ers and very rare. https://gizmodo.com/5661414/5661414/5661414/this-is-what-a-mobile-phone-looked-like-in-1964and-there-were-over-a-million-of-them At a guess, the buttons are to pick the frequency. That would imply that only 11 calls at a time.

“A hoy hoy.
I am ringing to enquire if your icebox is running”.

I’m a bit confused over the dial “8” for information vs. “0” for Operator.

Is it the information ladies had more up to date books to give you the number, but an operator might be able to connect you directly still? I would have thought if they don’t have the number, then someone was probably unreachable.

Still today, you call 411 to get the number, but call the operator for special assistance - “I need help to place a call to an aircraft carrier in the Pacific, please.”

So, you call 411 and get the number. Then, the 411 person asks if you want to be connected immediately, instead of you hanging up and dialing frantically before you forget the number you just got. If you opt to let the 411 operator dial it for you, it’s an extra charge.

My western Electric 2500 and 500 phones kept us connected when we got hit with 4 hurricanes in 2004 (Charley, Frances, Ivan and Jeanne). It’s the only reason I’m still paying Ma Bell for a landline. I’m not sure that 15 years later they still have the same battery setup, or where the twisted pair turns to fiber.

I would assume they are required to keep some sort of battery/generator backup for emergency purposes.

As I understand it, once you switch to fiber, your phone service is VOIP, so if you lose AC you will lose service immediately or when your UPS goes dead.

That’s why there’s a battery backup at the ONT. But yeah, no power at the ONT (AC or DC) means no phone.

anyone know the song?

Apple and Google should be required to make explanatory short films like this on how to use smartphones, and show them in the theatres instead of the 20 minutes of loud commercials before the feature.