If humans gave up on geoengineering after 50 years, it could be far worse than if we had done nothing at all

Any bright ideas how we save the entire world while cutting taxes on anybody who can buy a tax cut?

Reverse psychology?
Climate scientists and left-leaning politicians could vigorously claim that conservatives were right all along, everything is okay, and that the last thing church groups and conservatives need to do is worry about the environment. Yep, nothing to see here, don’t get involved.

Finally, make the case that atheists oppose geo-engineering on the grounds that God did NOT give man dominion of the Earth, so any claim that humans have the right to engage in long-term geo-engineering is crazy and offensive. Emphasize separation of church and state in this argument, it’s like catnip.

And any attempt at geoengineering is virtually certain to be shut down at some point in the future. The thing is, all the model studies for these projects show that they can be used to adjust the global average surface temperature with a surprising degree of accuracy. But the regional effects will be all over the place - some regions will be much warmer, some will experience cooling, and most places will experience significant shifts in their weather patterns. Its only in the average that things look okay. Which means it won’t take long for one of the regions experiencing negative impacts to force the project to be shut down (one way or another).

It’s like arguing over the thermostat setting, but multiplied by 7 billion.

Establish many programs. If we need to idiot-proof this, then maybe that’s what needs to be done.

And then do as much as we can. If possible, over spend on this. Let a thousand flowers bloom, but a million would be better. Those who would prune our efforts to save what we can would then have their work cut out for them.

Get the military involved. That has a tendency to establish standards and procedures (and cement them).

The only way to implement a long term geo-engineering project would be the follow the supervillain model and do it despite the whims of politics.

It would be pretty cool if some of this work could be done from space.

Or it’s all a big conspiracy for reasons A,B and C.

Just to be clear, if humans gave up on THIS form of geoengineering it’d suck. Not necessarily all forms would have this kind of problem.

E.g., anything you do to remove CO2 from the atmosphere is pretty much guaranteed to be safe.* If going from 399 ppm to 400 ppm didn’t send you over some sort of catastrophic tipping point, then neither will going from 400 back down to 399, or getting complacent and letting it rise back up to 400 once again.

* i.e., “safe” in terms of these kinds of effects. No comment on how difficult it would be to do such a thing in a way that was not itself destructive to the environment.

Renewable energy and carbon sequestration simply can’t move fast enough to prevent real disaster in Antarctic above all (and Arctic disaster sooner as a painful harbinger of bigger things). Buying 50 years would substantially increase our hope of doing the rest in time. In those 50 years, sheer exhaustion will also reduce the power of fundamentalists in the oil industry to keep us from saving our lives (and theirs!). Still, we do have a little time to work to develop other geoengineering options besides sulfate particles. If we had any sanity at all, we would be working very energetically to develop such options. This is not a game; if we don’t buy more time, we are ;probably dead.

This seems like a pretty far-fetched failure mode to me. The most cost effective thing to be doing first, is curb emissions, and that doesn’t look like it’ll happen anytime soon anyway.

Geotherapy rather than geoengineering, please. Geotherapy is the idea of using existing ecological systems to repair the damage anthropogenic activity, like climate change, has caused. It, unlike geoengineering, is a systems solutions for a systems problem.

Geotherapy: Innovative Methods of Soil Fertility Restoration, Carbon Sequestration, and Reversing CO2 Increase (https://www.crcpress.com/Geotherapy-Innovative-Methods-of-Soil-Fertility-Restoration-Carbon-Sequestration/Goreau-Larson-Campe/p/book/9781466595392) is the one academic text I know of which covers at least part of this subject.

As a layperson who has been monitoring climate science at Harvard and MIT since the late 1970s, I can tell you that the concept of geotherapy never comes up unless I raise it. I have even attended some of the solar geoengineering seminars David Keith and others have presented at these two institutions and don’t believe that these extremely smart people have a lick of wisdom. They come across to me as engineers excited to have a hammer seeing everything around them as a nail to bang home.

Get the military involved. That has a tendency to establish standards and procedures (and cement them).

The US Army Corps of Engineers reporting for duty: 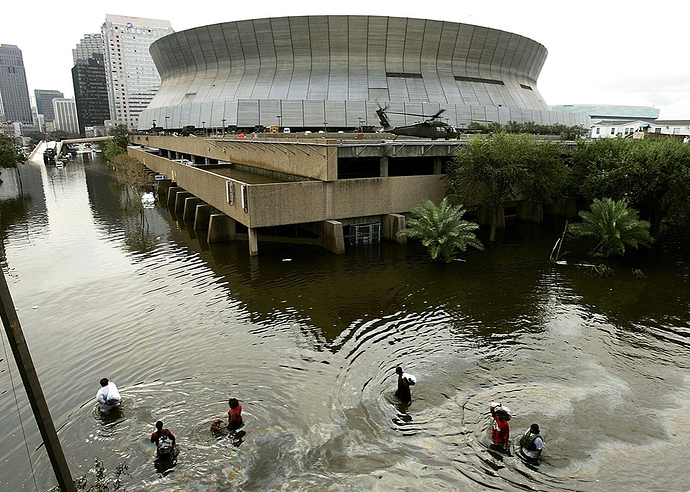 Well, we’ve been geoengineering for about 200 years now, with no sign of stopping yet…

This seems like a pretty far-fetched failure mode to me. The most cost effective thing to be doing first, is curb emissions, and that doesn’t look like it’ll happen anytime soon anyway.

True. And it would be ideal. But some of the science I’ve read indicates even if all emissions ceased altogether, some sort of ameliorative effort is still going to be needed.

The US Army Corps of Engineers reporting for duty:

I can tell you that the concept of geotherapy never comes up unless I raise it.

Well, this is the first time I’ve even read the term, so yeah.
Sounds interesting, I’ll look into it.

TL;DR, but isn’t this “bad outcome scenario” predicated not on the geoengineering itself, but the idea that if you do it people will think they no longer have to reduce carbon, and allow the level to continue to rise? Done in conjunction with carbon reduction geoengineering buys us and our nonhuman shipmates on the good vessel Earth time to correct our errors.

I fear just reduction is simply not enough at this point, and we’re currently not doing it as fast as we can. Witness our Feckless Leader throwing a wrench in the expansion of the solar business just to favor his pals, it’s like fighting over who gets the good seat on a sinking lifeboat.

This is geoengineering we’re talking about. Every one of those flowers presents a significant risk of making the situation catastrophically worse.

Well, we’ve been geoengineering for about 200 years now, with no sign of stopping yet…

The question is not WHETHER to geo-engineer, it’s which knobs to twiddle next.

Doing nothing may prove just as costly.

Doing nothing may prove just as costly.

Doing nothing is absolutely fatal.

But geoengineering is a last-ditch desperation response that is most likely to lead to catastrophic failure. It is a vastly less desirable action than just leaving the carbon in the ground where it belongs.

Shut down the carbon industries, now. Fuck the economic consequences.

I am not a climate scientist, but I am a scientist. I know how to read the literature and interpret the back-channels of scientific opinion; I can tell the difference between “this is what we suspect might be happening” and “this is what’s happening”. This is what’s happening: James Hansen was the head of the NASA Goddard Institute for Space Studies from 1981 to 2013; he now runs the Program on Climate Science, Awareness and Solutions at Columbia University’s Earth Institute. For the last thir…

I am not saying that remediation is a bad idea… As long as it’s “part of this nutritios breakfast”. If this kind of thing is done by itself, unilaterally, then is just give carbon emitters an alibi to keep emitting.

And 50 years? It’s been 50 years that we’ve been building nukes. And still no long term solution for the waste. I don’t have a lot of faith in our ability to engineer our way out of problems that we’ve engineered ourselves into.

Yeah, it’s a problem. Nuclear waste is kind of a separate category, though. We didn’t hit that anywhere near as hard as coal/oil. That could just be an issue of scale. I don’t honestly know if that could have been satisfactorily addressed if nuclear power had been more widespread.

But the climate is going to change whether we stop industrial carbon or not. At this point, it’s not looking like we have many choices available to us.

Shut down the carbon industries, now. Fuck the economic consequences.

I’ll vote 100% for this. But this necessity isn’t reflected in any reality currently on the table.

You’re a scientist. I’m not, but I’ve done the same thing looking at the primary literature. I see where everything is heading, and it might be our only shot at surviving it is some form of geoengineering. Maybe not.

If not, we had a good run, up until the end, anyway. The anthropogene will be pretty short, but we left a lot of crap in the oceans, so maybe that’s for the best. Life will go on, but we won’t necessarily be among its participants.

That “Man After Man” book probably won’t pan out, anyway.