Has anyone else been encountering this when talking with the Fox News crowd? The, “I’m a victim, too” mentality? Like, I have recently had one friend say, “But if I say anything, I’m a racist.” I’ve also heard, “Even though my great grandfather literally was a founding member of the KKK, and the Confederate flag is actually my heritage, I’m not allowed to use that symbol.” Then I’ve also had another former classmate write about how his rights as a Christian are being trampled by gay people getting married.

I’m just very interested in how this narrative of rights is being flipped so that it’s the people who already have rights who are being somehow trod upon by the minorities who are demanding their rights.

Yup. I’ve also heard a few times, “Democrats are the REAL racists”. As far as why, it’s mostly because they made black people lazy through welfare? Or because they talk about equality, but give minorities special treatment because of their race.

his rights as a Christian are being trampled by gay people getting married.

I love that argument. So many fundamentalist Christians find clever and novel ways to claim persecution.

They want to fill up all the space with copies of themselves. Physical, mental, spiritual, political Cancer.

I encounter it often. I tend to be rather matter-of-fact and call it out as BS.

"It’s like I can’t even say X anymore."
Why can’t you say X?
"Because people call me a bigot."
Is that a problem? Why shouldn’t they call you a bigot?
"Because they’re saying that’s bad."
So, do you agree with them?
"No…"
Then how is that you can’t say it? Do you have such little integrity that your main concern is how you might be perceived by other people?

It’s a big weasely spectacle of people who claim that they aren’t “free” to say or do stupid things simply because people don’t like it. Having their bigotry disapproved of makes them feel uncomfortable! So I interpret it as being that that’s the superficial level they understand civil rights on, the right to not feel awkward or uncomfortable. The lack of self awareness is bigly.

Yes, for years now, primarily in regard to LGBT rights. Nearly two decades ago I worked at a place that began offering domestic partner benefits.

When we got the news one of my co-workers literally started screaming, “This is a violation of my rights! I have a right to work at a place that doesn’t encourage that kind of lifestyle!”

Things have gotten much quieter since then but the underlying attitude hasn’t gone away. 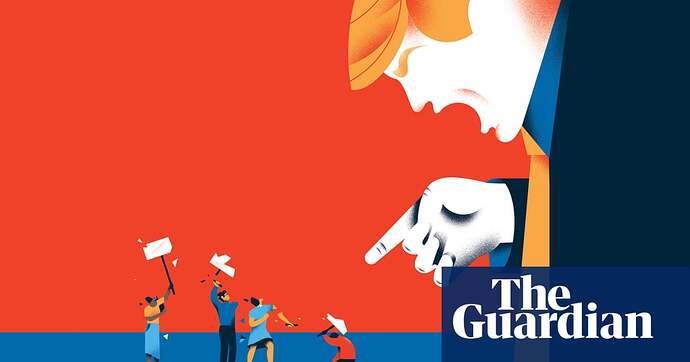 The long read: For 25 years, invoking this vague and ever-shifting nemesis has been a favourite tactic of the right – and Donald Trump’s victory is its greatest triumph

I’ve been seeing this for years now.

Liberals are oppressing my ability to express racist and homophobic ideas and oppress others! You’re intolerant of my hatred!!!

“I’m a victim, too” mentality?

If so its delightful not so long after nonsense like the Boston Kimono Kontroversy and the like. Let everyone play this foolish game!

As groups like Muslims, homosexuals, the transgendered, and “illegals” (I hate that term) have gotten more and more attention and care from the government and from society in general, good ol’ WASPs feel left out. Why aren’t they getting ‘special treatment’? They want candy too!!

When whining doesn’t work, they start screaming. And then they elect a Trump.

Claiming you’re a victim is an easy way for political leaders to manipulate the base emotionally to pursue political goals, esp. when it’s laden with cognitive dissonance (“poor us, we can’t gay-bash, because of Political Correctness”), since that dissonance makes the faithful hostile and defensive when their victimhood is questioned. Right-wing nationalist authoritarians are obsessed with their nation’s decline, a fall from purity, and their victimhood. Robert Paxton’s The Five Stages of Fascism describes the phenomena, and the US has been steadily following the trend:

Don’t forget to rant about “tumblrina SJWs” while you’re at it!

How does it go? When you have been on top for so long equality feels like you are losing something…
Buncha whiny crybabies.

Oh, yeah. And any of the terms used to quantify exactly how their argument is not correct – straw man, moving the goalposts, etc. – are used against progressive arguments without the slightest introspection on how they really apply to their own arguments instead.

I liked that article. It highlighted some of what I think are failings of the current left:

I like that the article demonstrates the absurdity that the agenda of right is somehow not “political”. How are conservative dogwhistles not a form of “politically correct speech”? This is trivial to demonstrate, because the right tend to have awfully weak rhetoric. Its bluster is pure inflated ego, and only sounds “strong” until it is seriously questioned, at which it deflates quickly. That’s why conservatives NEED to be taken to task in the debate forum, in public dialectic and discourse. This shows up their intellectual bankruptcy, counters media deception, and allows us to at least control our half of the narrative instead of being their shadow-boxing partner.

I liked that article. It highlighted some of what I think are failings of the current left

A profit-driven media (the very gatekeeper of your points) is not a failing of the left.

A profit-driven media is not a failing of the left.

(the very gatekeeper of your points)

That sounds pretty much like resignation to political insolvency and impotence. Allowing your adversary to decide your degree of participation in the cultural dialog IMO cannot reasonably be described as an effective strategy. YMMV

Public funding for media has also been crushed.

That sounds pretty much like resignation to political insolvency and impotence

So also goes your solution and implementation-free “ideas”.

Saying “I’m not programmed with bad ideas” is enough.